You can learn much about a grape by tasting several different wines, comparing and contrasting different styles, blends, terroirs and more. The same grape can sometimes make radically different wines, or it can create very subtle differences. That is part of what makes wine so exciting, how a single grape can create such diversity. It is so exciting to try new wines, to see how that wine expresses the nature of the grape.

I have recently done some comparison taste testing with several Petite Sirah wines from California. P.S. I Love You (the P.S. standing for Petite Sirah) is an advocacy group in California whose Mission Statement is: "To promote, educate, and legitimize Petite Sirah as a noble varietal, with a special emphasis on its terroir uniqueness." Their website provides plenty of information about Petite Sirah and its California producers. It is a wealth of resources and provides a great template for others that might want to start their own advocacy group for other specific grapes. Through them, I received some wine samples from several different producers.

Petite Sirah originated around 1880, when Dr. Francois Durif, a grape nurseryman working in southern France, named a new grape after himself. This Durif was combination resulting from two other grapes, Peloursin and Syrah. It is not a hyrid though.

Commonly, Petite Sirah wines are very dark in color, relatively acidic, very tannic, and often have flavors of black pepper and herbs. Because of its high tannins, it ages well and can easily last for twenty years or more.

Back in 1990, after years of declining acreage, there were only about 1400 acres of Petite Sirah remaining in California. Yet it saw a new resurgence so that now there is over four times as much acreage. Plus the number of producers have greatly increased too. There are now over 370 producers, six times as many as existed about ten years ago. Petite Sirah is becoming more and more popular with consumers, and with good reason.

With all of the samples I received, I tasted them with a group of my wine buddies so they provided some input to me as well. 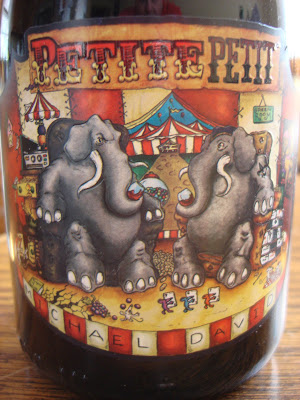 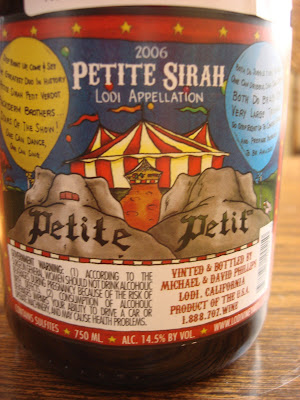 I decided to begin my review with my favorite of the Petite Sirah wines I tasted. This was the 2006 Michael David Petite Petit, Lodi ($28). This wine is blend of 85% Petite Sirah and 15% Petite Verdot and spent about 14 months in French oak. I was initially wary of this wine due to its cartoony label, which I thought might be a marketing gimmick that hid an average wine. So I was very pleasantly surprised that this wine was so delicious.

Michael and David Phillips are the fifth generation of growers in Lodi and currently have about 500 acres of vineyards. "The vineyards are irrigated by the Mokelumne River, which carries crystal-clear water from the Sierra Nevada Mountains, depositing minerals into the rich soils upon which the grapes thrive. Though not certified organic, Michael~David Winery strives to use all natural methods including integrated pest management, beneficial insects for pest control, trellising, leaf pulling and natural mined sulfur for mildew control."

This was a dark purple colored wine with an alluring smell of blueberry and vanilla. It was a silky smooth wine, with very restrained tannins, and pleasant flavors of ripe plum, blueberry, and black cherry. On the long finish, there were some mild vanilla and spice notes. I think the Petite Verdot tamed some of the tannic nature of the Petite Sirah. This is a wine I could drink on its own or with food. My friends all very much liked this wine as well. No one had anything negative to say about it. 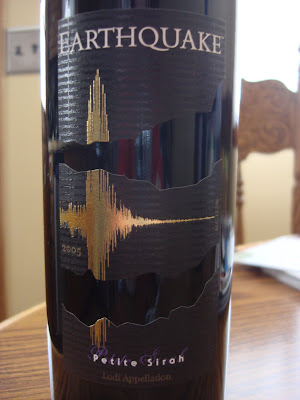 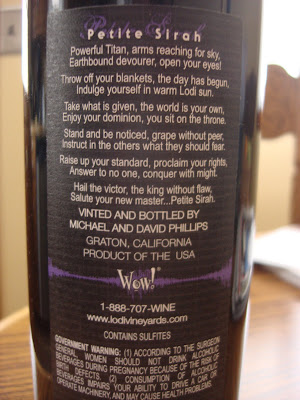 The 2005 Michael David Earthquake Petite Sirah ($28) is made from 100% Petite Sirah and I did not enjoy it like I did the Petite Petit. It had an off-putting medicinal smell to it. On the palate, there was prominent eucalyptus and Christmas spices. There were some dark berry flavors but they were underlying the other flavors. The tannins were moderate and it did have a decently long finish. But the taste just was not pleasing to me and my friends were not too keen on this wine either. 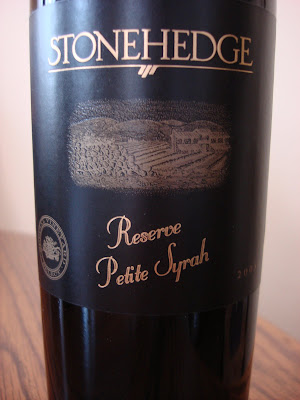 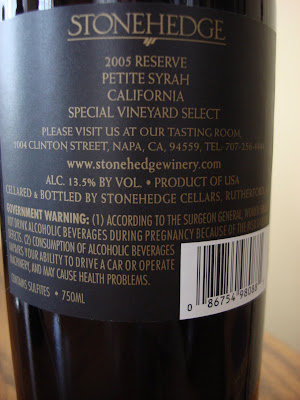 The 2005 Stonehedge Reserve Petite Sirah ($34) had too strong of a eucalyptus smell and that also came out on the taste as well. Spice notes were very prominent and the fruit flavors were very subdued. The tannins were restrained and it had a moderately long finish. I think the dominant eucalyptus detracted from my enjoyment of this wine. And my friends also were not real pleased with this wine. 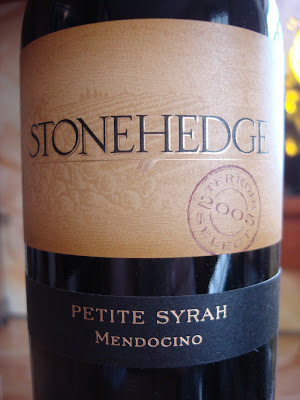 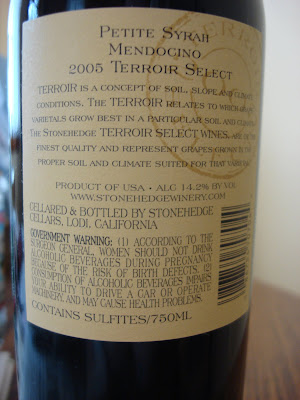 The 2005 Stonehedge Terroir Select Petite Sirah ($26) though was much more compelling. The grapes come from the Pallini Ranch vineyard in Mendocino, where the vines are some of the oldest in California. The wine spends about 18 months in American oak and has an alcohol content of 14.2%.

It had a rich, dark purple color and an intriguing nose of dark berries, spice and leather. It was a very big and bold wine, with a complex melange of flavors. Blackberry, black cherry, vanilla, leather, and dark spices. The tannins were prominent so this is very much a food wine. It had a long, satisfying finish and was a favorite among my friends. This is the type of wine that I think epitomizes what many see as typical Petite Sirah. And it surely presents an appealing model for that grape. 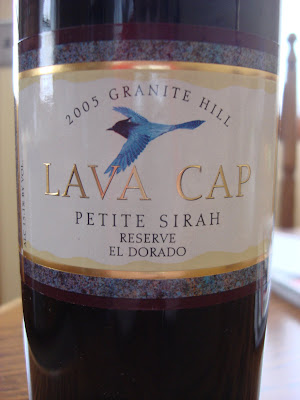 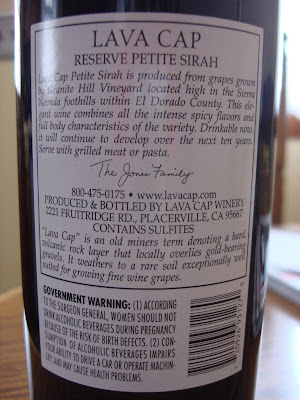 The Lava Cap Winery is a family owned and operated winery, founded in 1981, in the Sierra Foothills of Northern California. They use old world, labor-intensive techniques and sustainable agricultural practices. The name “Lava Cap” reflects the unique volcanic soil of the vineyard.

The 2005 Lava Cap Granite Hill Petite Sirah Reserve ($30) has spent about 18 months in French oak and has an alcohol content of about 14.9%. Only 1471 cases of this wine were made. This wine reminded me of the Stonehedge Terroir Select, another big wine with intense flavors. There were differences as well. The nose and taste had a bit more blueberry and ripe plum flavors and the tannins were more moderate. It also tasted almost a bit sweet, which turned off some of my friends but which I enjoyed. So interesting to see how different Petite Sirah can be, dependent on terroir and wine making. 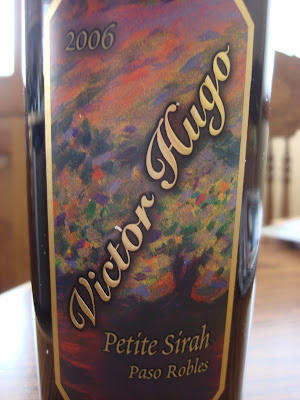 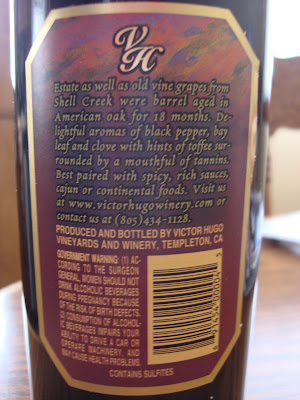 The Victor Hugo Winery is a small, family owned and operated winery in Paso Robles. I have previously tasted a number of their wines and have enjoyed all of them. I have come to expect very good wines from this winery. I have yet to be disappointed and their Petite Sirah was not an exception.

The 2006 Victor Hugo Petite Sirah ($22) has spent about 18 months in American oak and has an alcohol content of 13.8%. Only 1131 cases of this wine were produced. It had a rich, dark purple color and an alluring smell of lush dark berries. On the palate, this was a very smooth wine with delicious flavors of ripe plum, vanilla, blackberry and spice. It had a lengthy and pleasing finish. There was plenty of complexity and character, especially for the price. I found this to be a wine I could enjoy with or wthout food, and it was a very good value as well.

Overall, I found some impressive Petite Sirahs, enough to make me seek out more of them to taste. If you have never tried this grape, you should do so. Even if you think you know Petite Sirah, you might benefit from trying different Petite Sirah wines as you might be surprised by what you find.

What are your experiences with Petite Sirah?

This entry was very timely as I've been wanting to explore more Petite Sirah myself. It's such a flat-out delicious grape. I'll keep an eye out for the ones you recommend- thanks for publishing your thoughts on these wines!

Thanks for your comments. Would love to hear about any good Petite Sirahs that you find too.