The Beehive: House of Ill Repute 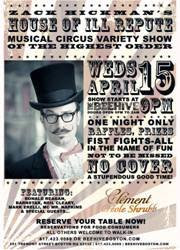 On April 15, from 9pm to 1am the Beehive in Boston’s South End will present Zack Hickman’s House of Ill Repute. Originating in 2004, this musical circus is a loud, jovial and mischievous variety show in the highest order featuring the very best musicians and entertainers. This one night only show will include artists such as:

Mark Erelli: A Boston headliner for over a decade, and Signature Sounds recording artist. Audience members should be prepared for a high energy, flashy performance. A highlight not to be missed, Erelli’s medley of Roy Orbison covers led with a full horn section.

*Bonus: During the show, raffle tickets will be distributed. The lucky winner will receive a typical Zack-esque prize, auto parts or food from the Asian groceries.


MC Mr. Napkins: "Nerd-rap" – A hilarious performance of “nerdy” rap songs ensured to bring a chuckle amongst any group of pocket-protector-wearing smarties.

Attention Guests: Be sure to make you dinner reservations early and secure your spot for this action-packed, laugh riot! As always, there is no cover charge at The Beehive.