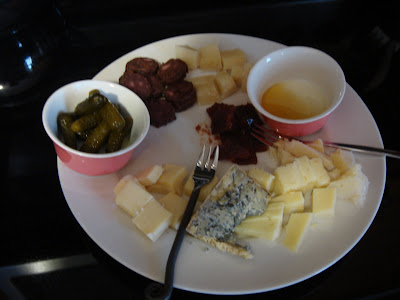 A delicious plate of five Spanish cheeses, morcilla, cornichons, membrillo, and agave nectar. Some crackers on the side plus a bottle of fine Spanish wine. A delightful afternoon treat which I savored and would also highly recommend.

At a recent trip to Las Ventas, a Spanish market in the South End of Boston, I purchased five different Spanish cheeses, none of which I had ever tasted before. I still had some morcilla, blood sausage, from a prior trip but had not tried that yet either. The membrillo (quince paste), cornichons, and agave nectar were bought elsewhere. The wine was a 2003 Abadia Retuerta Cuvee Palomar, of which I will post about tomorrow.

Queso Ahumado de Pria: This is a cow and goat's milk cheese ($17/lb.) from Asturias, a region on the northwest area of Spain, facing the Cantabrian Sea. This cheese is aged for two months and is smoked with oak. It has a slightly smoky flavor which I very much enjoyed. I could easily imagine using this in cooking, adding a smoky flavor to any dish. Maybe a smoky mac and cheese?

Ibores: Also known as Sierra Ibores, this is a raw goat's milk cheese ($18/lb.) from Extremadura, located on the western side of Spain. The milk comes from Verata and Retinta goats. It was aged for three months and has a fat content of 45-50%. It is a very firm cheese that does not slice easily, instead cracking and splintering when cut. It reminded me a bit of a mild Parmesan yet with a distinctive flavor that brings to mind other goat cheeses. Like Parmesan, you could grate the Ibores and use it on salads or atop almost any dish.

Aragones: This is a cow's milk cheese ($24.50/lb.) from Aragon, the northeastern section of Spain. This was a soft, creamy cheese but with a subtle earthiness. A nice mix of flavors. This cheese should please most people.

Queso de l'Alt Urgell y la Cerdanya: Known as l'Alt Urgell for short, this is a cow's milk cheese ($18/lb.) from Catalonia, also in the northeastern section of Spain. The cheese has been aged for two months and has a minimum fat content of 45%. This was definitely different from the Aragones, a bit more buttery and with subtle fruit flavors as well. But it should also please most people too.

Queso de Valdeon: Also known as Picos de Europa and Valdeon, this is a cow and goat's blue veined cheese ($18/lb.) from Castilla-Leon, the largest region of Spain. It was aged for three months and wrapped in Sycamore leaves. This was a milder though flavorful blue cheese, similar in some ways to a Gorgonzola. It also looks interesting with lots of blue veins throughout. Later in the evening, we melted some of this cheese atop a couple steaks and it was a great match.

I really did not have a favorite of the five as they all were delicious, each with their own assets. Have you ever just made a meal of some cheese and accompaniements? It is easy to put together and it can be quite delicious, a wonderful melange of different flavors and textures. There are so many different and exciting cheeses now available and Las Ventas has plenty of great Spanish cheeses for your delight. You only need to buy a fraction of a pound of several cheeses so your total cost is not really that high.

Give a cheese plate a try sometime. And if you do, come back and tell me your thoughts, especially if you eat any unique or different cheeses.
Posted by Richard Auffrey at 6:01 AM

sounds great Richard...and you didn't even have to leave MA!

How fortunate are you to have such a delicious Spanish spread in your neck of the woods! I've had the Queso de Valdeon quite recently actually, and thoroughly enjoyed it. Curious if you considered pairing any of the spicier cheeses, typically goat cheese, with a Fino sherry. Definitely one of our favorites!

Becky: It is well worth a stop. They have so much good stuff there.

Gabriella: I agree with you that a nice Fino probably would have gone quite well with some of the cheeses. Sadly, I didn't have any sherry on hand (except for a '64 Vintage Sherry). But I will seek one out the next time I do such a cheese plate.