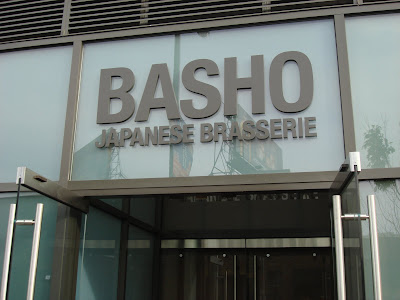 As I mentioned previously, I was intrigued by the opening of Basho, a new Japanese brasserie near Fenway. So I was excited to attend their Grand Opening, to get a glimpse of what this restaurant could deliver.

It is a much larger place than I envisioned and can seat about 250 people, plus it has an outside patio area that can seat about another 50 people. It has a hip though more minimalistic vibe. 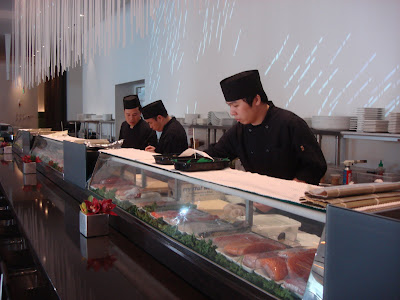 There is a long sushi bar, which can seat around 15 people or so, and it is fairly typical, though there is little need to change. You sit, watch the chefs prepare your nigiri and maki, and then savor each bite.

At such Grand Openings, servers walk through the crowds with trays of appetizers, and you probably won't get to taste everything they have as people quickly gobble up whatever comes by. Of the food I did taste, it was generally very good. The sweet potato tempura was a highlight, with just the right, light and crunchy tempura batter. The shrimp tempura maki also was excellent. The fried chicken balls, with a teriyaki glaze, were also very delicious, looking like a meatball. 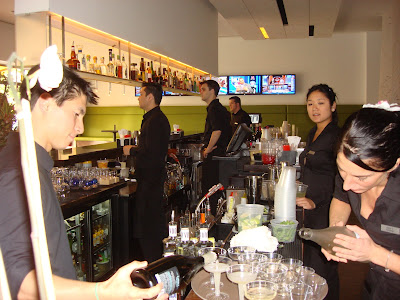 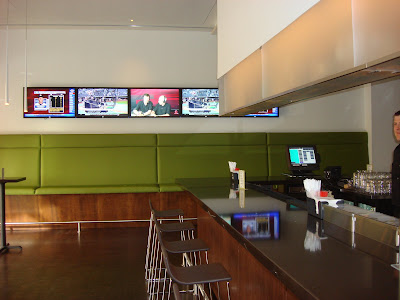 The bar area is large and this could become a hotspot at night, or when the Red Sox are in town. With five televisions, they can broadcast multiple sporting events or other shows at the same time. The bar is stocked pretty well, and for the Grand Opening they served numerous cocktails as well as the Kaori Sake, one of my favorites. Sake prices are generally good, and they have a nice selection of diverse choices. 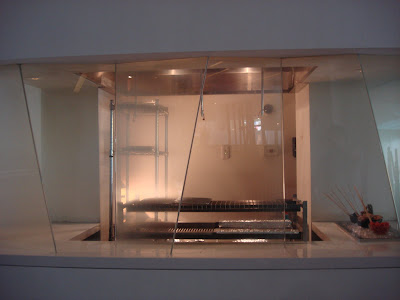 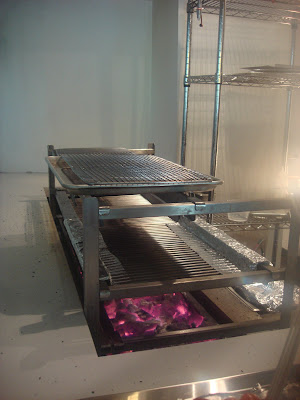 Behind an unusual wall of glass panels is their robata grill. Each pane of glass is cloudy unless you look directly at it, when it then becomes clear. We did get to try some chicken cooked on the grill, and it was moist though the sauces seemed a bit overpowering. I think the robata has lots of potential, and I would like to better assess it when I am dining there. A Grand Opening is not always the best way to properly assess the food quality of a new restaurant.

In general, I was very pleased with Basho and certainly will check it out for lunch or dinner in the near future. They already passed one of my first hurdles, by having a spot-on tempura. I look forward to exploring their menu, and drinking more Sake.
Posted by Richard Auffrey at 11:10 AM

Just stopped in to Basho for the first time and very much enjoyed the sashimi sampler. Unusual and creative pairings of flavors and textures. Very attractive presentation. I'm eager to try more. This is definitely not your grandfather's sushi bar.