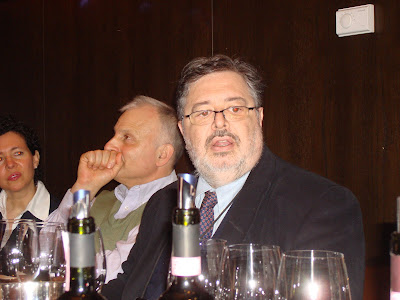 Danielle Cernilli, the founder and editor of chief of the famed Gambero Rosso, said it succintly: "Chianti is simpler path of Sangiovese."

Danielle, his wife Marina, and others, representing the Consorzio Vino Chianti came to Boston for a luncheon, seminar and tasting to showcase the wines of Chianti. The Consorzio, which was founded in 1927, currently has about 1080 partners, representing much of the Chianti DOCG. Chianti is the largest denomination in Italy, and received DOCG status, Italy's highest level appellation, in 1984. The word "Chianti" derives from an Etruscan word that means "little stream," as the region is surrounded by numerous waterways. Chianti, with about 2500 producers, currently produces approximately 130 million bottles of wine each year.

Currently, Chianti can be a blend of 70-100% Sangiovese, and up to 30% other grapes, which includes some white varietals. Chianti is generally a fresh, light, inexpensive, and easy drinking wine. It is very common in Italy to drink it with everything from steak to lasagna. In general, wines from southern Chianti are larger, bigger wines while those of the north are more elegant. Sangiovese can make high-quality wines such as Brunello di Montalcino and Super Tuscans, but as Danielle put it earlier, Chianti is the simplest form. 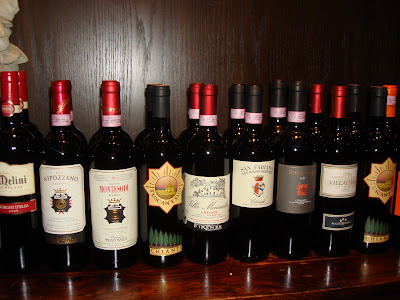 During lunch at Eastern Standard, I tasted about ten different Chiantis, from a variety of subdenominations. These were all inexpensive wines, every-day drinkers that are intended to accompany food. This was a good way to taste the wines, to see how they fared with foods such as charcuterie, seared skate and grilled lamb loin. The wines were generally good though simple, wines to enjoy with dinner. The 2007 Frescobaldi Chianti Rufina Nipozzano Riserva did stand out from the rest, having more complexity and flavor. 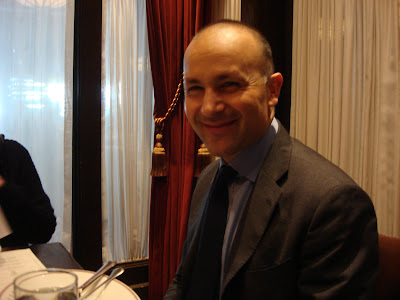 But my favorite wine of the day was the 2008 Poggio Bonelli Chianti Villa Chigi. Lorenzo Ficini, pictured above, is a Sale Manager for Poggio Bonelli and I had the opportunity to chat with him a bit about the wine. 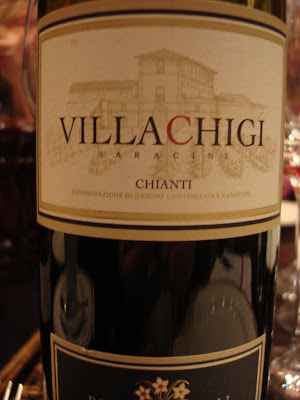 Poggio Bonelli is owned by MPS Tenimenti S.p.A, a subsidiary of the Gruppo Montepaschi, a very large and famous Italian bank. The winery currently produces about 20,000 cases each year, about 12,000 being Chianti. They also produce organic olive oil and are moving towards organic agriculture for their vineyards as well. Using the 2007 vintage, they will produce their first Chianti Riserva, though they already produce a Chianti Classico Riserve.

The 2008 Poggio Bonelli Chianti Villa Chigi (about $10) is a blend of 95% Sangiovese with the rest Colorino and Merlot. No white grapes were used to produce this wine. The wine was fermented and aged in stainless steel, and has an alcohol content of 13%. It had a bright red color with a mild nose of red fruit. On the plate, it stood out from the Chiantis as it had more character and complexity. Besides the red fruit flavors there was some pepper and even a bit of earthiness, which I like. There was a good acidity and a decent finish. I was very surprised when I learned the price of this wine, which makes this an excellent value.

This is a good example of how not all $10 wines are the same. You can find plenty of simple, easy-drinking wines for that price. But, with some effort, you can also find standouts, wines of character at that price point which would still be a good buy at twice the price. I get very excited when I find such wines, when I taste such a great value wine. This Poggio Bonelli gets my top recommendation.
Posted by Richard Auffrey at 6:00 AM

What a wonderful post, beautifully written. It captures these wines so well.

The feel of the mild nose taste your speaking of, is EXACLTY...what I'm looking for.

The feel of the mild nose taste your speaking of, is EXACLTY...what I'm looking for.