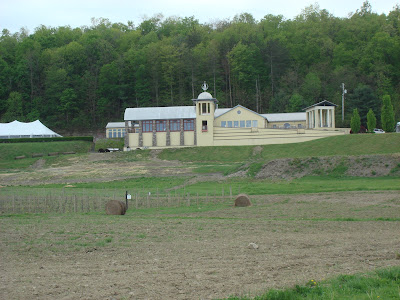 TasteCamp did not try to gently ease us in. Instead, we were immediately immersed into a large wine tasting, setting the stage for a marathon weekend of tasting. TasteCamp is not for the faint of heart, or small of bladder. But at least you can pace yourself. And no one keeps track of how much or how little you drink.

Our first official event for TasteCamp East 2010 was a Grand Tasting of wines from Keuka Lake and Canandaigua Lake wineries. The tasting and luncheon were held at the Heron Hill Winery, pictured above. About ten wineries presented a sampling of their wines and we were able to taste as many or as few as we desired. I tasted a fair share of the wines, though certainly not all of them. Pacing was important as there would be plenty more wines to taste later that day. 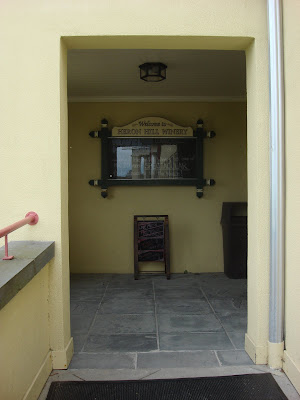 The entry way into the Heron Hill winery. It is a stylish winery with an elegant tasting room, and a nice gift shop. I picked up a couple jars of local Luke's Pickled Garlic Scapes, both Jalapeno and Dill, and they turned out to be quite delicious. 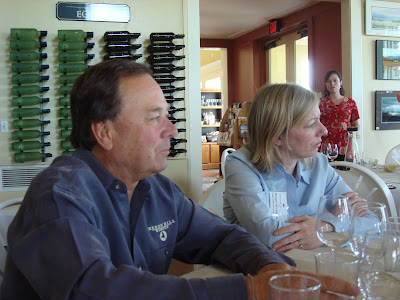 Heron Hill has been producing wine for over 30 years, and they currently produce about 20,000 cases each year, with almost 20 wine varieties. The owner of Heron Hill is John Ingle, pictured above, and I sat next to him during lunch. I found him to be a very down-to-earth and personable, with a true passion for wine. I have tasted some of their wines before, especially impressed with their Blaufrankisch and Cabernet Franc.

Also pictured above is Morgen McLaughlin, the President of the Finger Lakes Wine Country Tourism Marketing Association. She too is passionate, an ardent advocate of the wines of the Finger Lakes region. I have previously met her at the Boston Wine Expo and it was a pleasure to see and chat with her again. 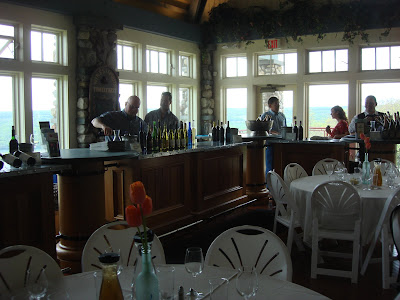 The various wine makers and winery representatives held court at the lengthy bar. The attendees could check out any winery we wished, tasting whatever they had to offer. This was an important tasting as it would likely set the tenor for the rest of the weekend. If the wines largely disappointed, attendees might be more critical of the rest of the wines that weekend. If the wines were raves, then the good mood might extend through Sunday. It would also reflect on the organizers. Had they chosen the appropriate starting point for TasteCamp, or had they chosen something which would taint the rest of the weekend?

In the end, I found a mixed bag of wines, some very good, some very bad, and a fair number in between. Which is really a snapshot of any wine region, almost a bell curve of sorts, and there is little else you can ask for. So, this first tasting was a good choice for the start. I think it presented a realistic picture of the region, showing its assets and flaws.

Here are some of the wines which most resonated with me, for various reasons. Some because they used grapes new to me, others because I thought they were especially good wines.

The 2008 Valvin Muscat ($14.99) is made from 100% Valvin Muscat, a hybrid grape developed at Cornell University in the 1960s. This wine was aged in stainless steel, made in an off-dry style, has an alcohol content of 12%, and only 529 cases were produced. I found it to be very aromatic, with intense floral and pineapple smells. On the palate, there were flavors of exotic fruits with hints of orange and only a touch of sweetness. It was a very interesting taste and had a moderately long and satisfying finish. I think this is a good value wine.

(It is interesting to note that the winery website mentions which of their wines are considered Vegan.)

This winery is where I first met my new nemesis, the Noiret grape, a hybrid that appears to be treasured for its green pepper flavor. Just say no to Noiret! I prefer to eat my salad with a fork, and not to drink it. Their 2007 Vergennes, also made from a hybrid new to me, was not to my liking.

I did like their 2007 Classic Traminette ($12.95), which had some tasty pineapple and grapefruit flavors, and was intrigued by the NV Griesa Hill Iona Rose ($9.95). The more unique Iona grape has made an interesting, more New World style Rose, with nice cherry and raspberry flavors, and only a bit of sweetness. Should be very consumer friendly, especially during the summer.

Though I was not a fan of their wines, I do think they had a fascinating story to tell. It is the only winery in a dry town on Canandaigua Lake. A legal loophole allowed them to establish the winery. Wilhelmus Kuenen, a Dutch immigrant, brought his family to the U.S. when his son, Boud, was seven years old. Wilhelmus started making wine in 1958, and continued to do so even after his retirement. In 2007, Boud opened his own winery, after a career in the aerospace industry, and named it after his father.

Their 2007 Synchronicity ($20.99) is a blend of 50% Cabernet Franc and 50% Syrah, and was aged in New York and Missouri oak. I really enjoyed the flavor of this wine, with its subdued dark berries, ripe plum and spicy backbone. The tannins were restrained and the finish was long and enjoyable. A fair amount of complexity and it comes at a reasonable price.

The 2008 Passion ($39.99) is a 100% Traminette Ice Wine where the grapes have frozen on the vine. It only has an alcohol content of 11% ABV and is not overly sweet, presenting some delicious flavors of honey, pineapple, orange peel and hints of floral.

For an inexpensive wine, their 2006 Pinot Noir ($12.99) is a pleasant, easy-drinking Pinot. It only has an alcohol content of 12%, has a nice fruity aroma, and the palate brings cherry and raspberry flavors. It is a simple wine, but pleasing nonetheless and would make for a good food wine.

I would taste a number of excellent Gewurtraminers in the Finger Lake region, and it started with their 2008 Gewurtztraminer ($16.99). With an alcohol content of 13%, this wine was very aromatic, a typical Gewurtz smell. It had a delicious and crisp taste, with exotic fruits and mild spice notes. A very good food wine and something to intrigue the palate. 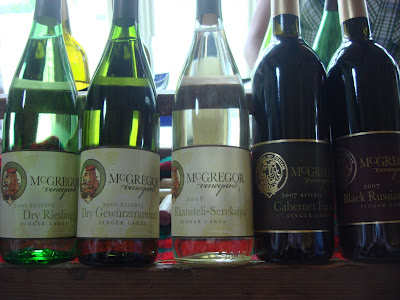 Probably my favorite wines of this tasting came from this winery. Though the winery was established in 1980, the McGregor family actually began planting vineyards in 1971. They planted both vinefera and hybrids, though other locals were skeptical about the vinifera. But they did succeed, and currently grow a variety of grapes, including some very rare ones including Sereksiya Charni, Saperavi Rkatsiteli, and Sereksiya Rose.

The first wine I tasted was their 2008 Rkatsiteli-Sereksiya ($24.99). They are the only producer of Sereksiya Rosé in the US and one of only two Rkatsiteli producers in the Finger Lakes. The wine has an alcohol content of 11.43% and only 207 cases were produced. This wine seemed very exotic to me, with a complex mouthful of flavors including citrus, lychee, melon, pineapple, and some spice. It was crisp and well-balanced, with a very pleasing finish. It reminded me a bit of an Albarino crossed with a Gewurtztraminer. It was certainly a unique wine and I was impressed.

The 2007 Cabernet Franc Reserve ($24.99) was aged for about 19 months in American oak, has an alcohol content of 12.7% and only 386 cases were produced. It had a light red color with a pleasant aroma of red fruits. It did not contain any green pepper smell or taste. On the palate, it had lush black cherry, raspberry and blueberry flavors with bits of spice, especially on the long finish. A very smooth, easy-drinking wine with some character, this would be good on its own or with food.

The 2007 Black Russian Red ($54.99) is a blend of two rare grapes, Saperavi and Sereksiya Charni. The wine has an alcohol content of 12.5% and only 293 cases were produced. The wine undergoes 100% malolactic fermentation and is aged for at least 19 months in Minnesota oak. Generally this wine needs lots of cellaring, about ten years, to tame its huge tannins. But this vintage seemed very drinkable now. It is a complex wine, with an abundance of aromas and taste which all harmoniously blend. In some respects, it is like a Cabernet Sauvignon, except there are some hints of exoticism so you realize you have something very different in your class. Blackfruits, vanilla, smoke, leather, spice and much, much more. A very lengthy finish, and you will still crave even more. A top notch wine, despite the price, and a blend you may never see made by any other producer.

Remember: The key to such marathon tastings is lots of spitting, plus eat something if you can. And it would be a lengthy weekend of spitting!
Posted by Richard Auffrey at 5:45 AM

Thank you to all the Bloggers who came, it was great sharing lots of wine stories with everyone! I hope that the rest of the weekend was as amazing as it was here at Heron Hill!