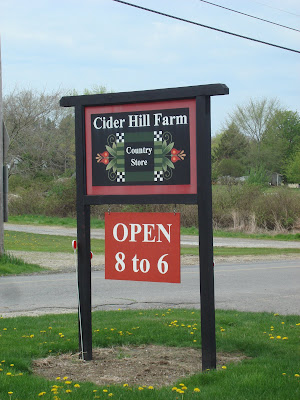 If you are going to visit the Newburyport Farmers' Market, why not take some additional time and see more of the sites of the North Shore region. Pack a cooler or two, put some ice in the coolers and you will be ready for the day, prepared to preserve whatever you might purchase in your travels.

That is exactly what I did this past Sunday. After my trek to the Farmer's Market, I next drove to the Cider Hill Farm in Amesbury, which is only a short drive away. I had never been there before, but recent tweets by CiderHill mentioned their cider donuts and I was hooked. I love cider donuts, and I know many others that do as well. So while I was in the area, I knew I had to stop by and get some donuts.

Cider Hill Farm is now open seven days a week, from about 8am-5pm or 6pm. The farm was established in 1978 and currently consists of 145 acres, with about 70 acres dedicated to growing fruits and vegetables. They have a farm store in a restored 150-year old ‘pegged’ dairy barn. They bake their own fruit pies, tea breads, muffins, cider donuts, breads and pastries. They also have honey from their own bee hives.

It is still early in the season so the farm store had almost no produce, but they do sell many other food items, a good share being made locally. You'll find candy, jams, jellies, meats, cheeses, pies, pickles, crackers, popcorn, sauces, syrups and so much more. I did buy some cider donuts, and they were very good, though none were warm at the store. Probably later in the season, when the farm store is busier, you'll be able to get cider donuts hot out of the oven.

I also bought an Aristocrat Chicken Pot Pie (all meat), which comes from a local poultry farm. They also have a pie with vegetables, peas and carrots, as well as turkey pot pie. I had it for dinner later that night and it was delicious. A thick, flaky crust covered a savory gravy and plenty of tender, white-meat chicken. For those used to Harrow's Chicken Pies, the gravy in the Aristrocrat is lighter and not as thick. I was impressed with the Aristrocrat and definitely would buy their pies again.

Cider Hill Farm is a good food destination, and I expect it will get better and better as the season continues. I will be stopping by there again and will report back when I do.

I should note that while driving around, I saw several Dairy Queen stores. If you have a hankering for a Blizzard, the North Shore is the place to visit. 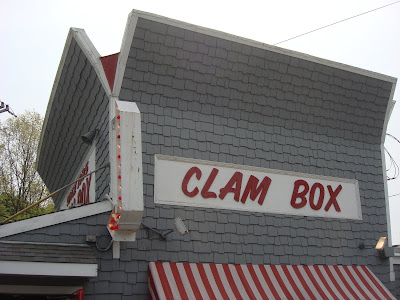 Though it wasn't planned, I stopped at the Clam Box in Ipswich for lunch. This is a well known seafood restaurant, which is over 70 years old, and is most famed for its fried clams. The food is excellent, though you likely are going to wait for the pleasure of dining. You order at a counter, and then take your food into their dining room or go outside to their picnic tables. 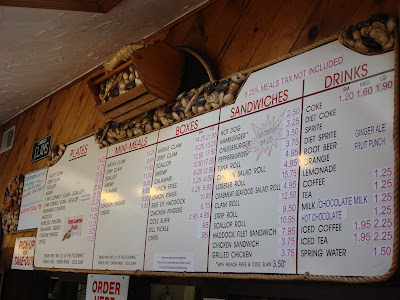 I had to wait in line to get into the restaurant, and the line does not move quickly. As the lobby where you order is small, most likely you will be waiting outside to get in. The menu has primarily fried seafood, with some other options too. You can get a plate, which comes with two sides, or a mini-meal which comes with only one side. Prices are reasonable for the quantity and quality of the food. Though even after you order, you'll wait again, more than you would at most similar places. 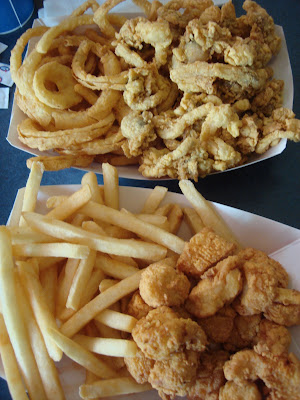 We had a couple of the mini-meals, the Fried Clams with onion rings and the Fried Scallops with fries. The clams were delicious, fried perfectly, and without any grittiness to them. These are definitely some of the best fried clams you will find. The scallops too were excellent, tender and flavorful. Even the onion rings impressed me, and I am very picky about my onion rings. They had the right proportions of batter and onion for me, and had a nice clean taste. One of the secrets of the Clam Box is that they frequently change their oil, so it does not sit around all day.

If you want some top-notch fried seafood, in a casual setting, then visit the Clam Box. Expect to wait, or just call your order ahead.

Posted by Richard Auffrey at 3:30 PM