What are your thoughts about Sherry?

Unfortunately, to many people, Sherry is stereotyped as being only sweet, an old-fashioned drink once the purview of their grandmothers. Yet that is far from accurate and the stereotype needs to be overcome. If people can get past their unjustified bias, they will find a diversity of styles and flavors, and much of it dry. Sherry also pairs well with food and can be an excellent ingredient in cocktails. You should explore the wide world of Sherry!

I am a fan of Sherry, but certainly wish I had the opportunity to drink more of it. One significant limitation is that most local wine stores only carry a very small selection. Thus I don't have much of a chance to taste all of the brands and styles of Sherry that I wish I could. Hopefully that will change in the future, and the Sherry Council of America is doing their part to bring about such a change.

They recently launched the Secret Sherry Society, a clever, new marketing campaign aimed at heightening consumer awareness about Sherry. The Society will engage consumers, restaurateurs, sommeliers, wine retailers, wine writers & bloggers, and others. They are trying to make the Sherry experience fun, and are conducting numerous Sherry tastings and dinners throughout the country. There is no real secret, but the illusion of secrecy is intriguing. Just check out their website and have some fun learning about Sherry.

The first stop on the Society's road trip was Boston, and they conducted several events, private and public, sharing their love of Sherry. I was fortunate to attend their media luncheon at Mooo, a Boston steakhouse where I have happily dined before. 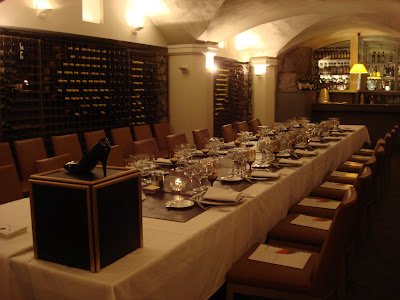 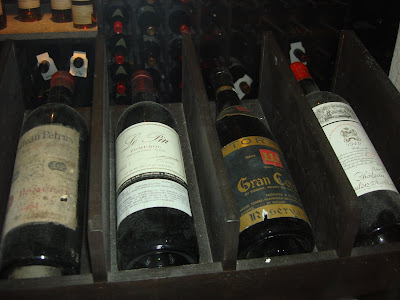 We were seated in the restaurant's wine cellar, a fascinating room, especially for any wine lover. You can admire some very old wines, hoping (or dreaming) that some day you might be able to sample one of these rare treasures. I'd freely dust off all the bottles if I could take one home with me. A wine lover can wish.

Prior to sitting, we stood around chatting, enjoying a cheese and olive antipasto paired with a Jerezini cocktail. This cocktail contains 2oz of orange-flavored vodka, 1/2oz of Grand Marnier, and 1oz of Fino Sherry. You combine it all in a mixing glass with ice, shake, and then strain into a Martini glass with an orange twist. I enjoyed its tangy and citrus taste, but note that it is potent. I would not suggest having too many of those if you want to remember dinner. Adding Sherry to cocktails has become popular lately, much more popular than drinking sherry on its own.

We then sat to enjoy a five-course lunch, presided over by Sarah DiBari, the wine director of Mooo, who had paired all of the dishes with Sherry. She was very personable and seemed both knowledgeable and passionate about wine. I had a chance to chat with her briefly and was impressed with her enthusiasm. I think all of her pairings worked out very well for the lunch. 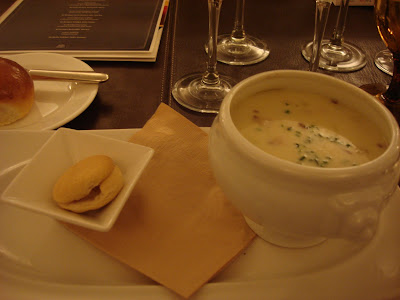 The Society intends to create a city-specific pairing every where they visit. In Boston, they chose this to be chowder with a Manzanilla. So, our first course was a Potato and Leek Chowder with whole belly clams and applewood smoked bacon. This was an excellent chowder, not overly thick or thin, with lots of flavors, all blending harmoniously together. There were touches of smoke and salt, potato and mild onion. And that blessed bacon!

This course was paired with the NV Pedro Romero Manzanilla Sherry, a dry Sherry. This family-owned winery was established in 1860. The Manzanilla smells like the ocean, that pungent briny aroma, and it comes through in the taste as well, a very common element of this type of Sherry. It is probably the easiest way to differentiate a Fino from a Manzanilla. As it reminds you of the sea, it pairs very well with seafood and the acidity of this Sherry helped to cut through the creaminess of the chowder. 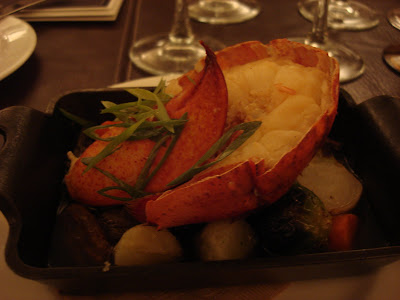 Next up was Butter Poached Maine Lobster in a ginger broth with spring vegetables. This is a dish that would be hard for any New Englander to dislike. Sweet lobster meat with a buttery taste, complemented by the pungency of the ginger. The vegetables were fresh and crisp, also enhanced by the ginger broth. With a claw and half a tail, this was an ample and delicious course.

This was paired with the NV Bodegas Pedro Romero Fino Pale Dry, which has seen a little oak. A fine dry Sherry, with hints of nuts, this was a good accompaniement to the lobster. It had that typical Fino tang to it, which some people dislike, but they really need to drink Fino with food, and they will likely appreciate it much better. It was not really intended to be drank on its own and its character does change when accompanied by food. 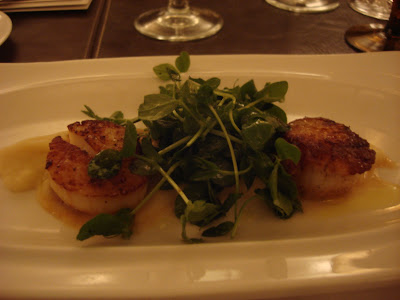 Maybe my favorite course was the Caramelized Sea Scallops with truffled pea tendril salad and parsnip puree. These were exquisite scallops, cooked perfectly so that they had just the right consistency, neither too firm nor too soft. You would think scallops were easy to prepare, but they are not to get them just perfect. The caramelization was also done skillfully, adding to the sublime delight of this dish. The rest of the dish was good too, but my love for the scallops eclipsed all else.

The scallops were enhanced by the NV Bodegas Hidalgo Amontillado. This family-owned winery was established in 1792, and produce a full line of Sherries. Amontillado is one of my favorite types of Sherry so this was a treat. Smooth flavors of nuts, caramel, some salt and hints of orange peel. Good acidity with a long and satisfying finish. I often love to sip Amontillado after dinner, but this was a nice match during my meal. Give me a couple more plates of scallops, some more Amontillado, and I would have happily moved into the wine cellar. 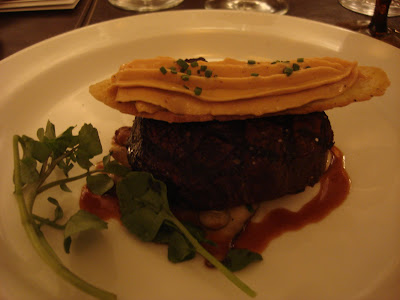 After all that seafood, we moved onto some red meat, a Broiled Beef Tournedo with woodland mushrooms and pate toast. A tender slice of beef that was enhanced by the earthy mushrooms. The pate was creamy and decadent, again with some of that earthy flavor.

For this course, we drank the NV Bodegas Barbadillo Oloroso, which I had recently tasted at the Wine Riot. I had been impressed with the Barbadillo profile, and especially impressed by the Oloroso. So I was delighted to taste it again with this earthy course and I think it was another very good pairing. You probably never considered pairing a Sherry with a steak, but it is really far more versatile than you may realize. 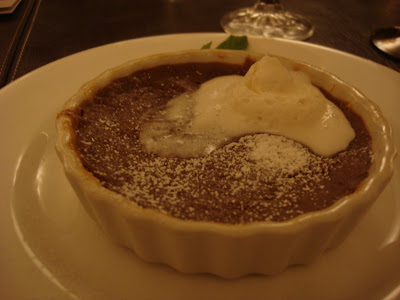 For dessert (and I barely had any room left after that sumptious meal), we had some Indian Pudding with whipped cream, a very traditional New England dessert though I see it only rarely on menus. It was light and delicious, with a nice molasses flavor.

Our final Sherry was the NV Emilio Hidalgo Pedro Ximinez, which is sweet though not overly so. There is plenty of flavor, especially caramel and honey, with this Sherry beneath the sweetness, and it is a good dessert wine, with more character than some others.

I think those of the attendees at this lunch with little experience with Sherry came away with a new appreciation for this Spanish wine. It is with such Sherry-paired meals and tastings that more people will learn about and enjoy Sherry. Consumer education is essential, especially paired with actual tastings. With a greater demand for Sherry, then retailers will start carrying more brands and types.

You will be hearing more about Sherry from me in the near future. In September, I will be traveling to the Jerez region of Spain, where Sherry is made. I am sure I will have much to report, and I hope to learn even more about this delicious wine. I will be passing on the fruits of my education to my readers too.
Now I just have to stop thinking about scallops and Amontillado.
Posted by Richard Auffrey at 6:00 AM

Great blog! I saw this posted by the Secret Sherry Society on FB. After hearing about SSS from some friends who own Union 206 Studio in Alexandria, I have become obsessed with sherry. Had dinner with some friends recently at a tapas bar (in Indianapolis, IN, called Barcelona) and had a sherry tasting. We all enjoyed it, and I look forward to expanding my palette to include sherry! The tasting menu at Mooo looks great...nom! Moving to DC in a few weeks, looking forward to more sherry-fun.

Thanks very much for your comments Sarah. Good luck with your future sherry endeavors!

Fantastic photos , really great photos. I am also a fan of sherry wine, and like its sweet taste very much.