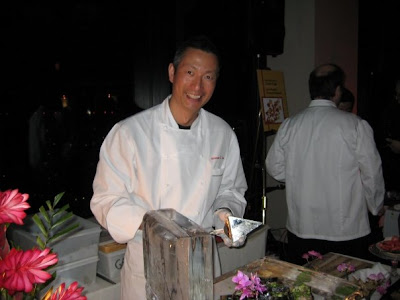 As I mentioned in yesterday's A Spoonful of Ginger post, I wanted to devote a bit more time to talking about Chef German Lam of Glam Foods, LLC. Why did I select one chef to highlight out of the many from that event? Though I had plenty of delicious food at the event, there was a single dish that stood out to me as especially unique. And that dish was prepared by Chef Lam.

Chef Lam prepared a French Asian Seafood Head Terrine with Sauce Vert. Initially, I was a bit wary of the terrine, unsure whether I would like it or not. Not all terrines are equal and I have had some terrines that really displeased me. But I gave it a try and it was absolutely delicious, enough that I returned several times for more pieces of it. The flavor was complex, with plenty of fresh fruit flavors, especially Asian pear, and an underlying taste of seafood, the shrimp most prominent. The flavors were well-balanced, nothing being too overpowering, and there was an interesting mix of textures as well, from the soft gelatin to the crunch of the soy beans. It really impressed me and I think it is the type of dish that would appeal to most food lovers.

I spent some time talking with Chef Lam and he told me some about how this intriguing dish was created. He started with lobster and shrimp broth, watercress, white miso, dashi, onions, carrots, and celery. Then he used some gelatin to thicken the mixture. After that, he added soy beans, baby shrimp, and salmon and then wrapped it in nori. The Sauce Vert had a sweet chili base, using ichimi (Japanese pepper flakes) as well as cilantro, scallions, fresh waterchestnuts, lemon juice, Asian pear, and olive oil. Chef Lam obtained many of his ingredients from the Sun Sun Company (in Chinatown) and Captain Mardens Seafood.

Chef Lam was born in Santiago, Chile and throughout his life he was exposed to many different cuisines. He was classically trained at Newbury College and has worked at many high-end places, including the Chatham Bars Inn, the Ritz Carlton Cleveland, the Ritz Carlton Boston, and the Harvard Club. So he definitely has plenty of experience creating high-end cuisine.

Currently, he spends much of his time working for his company Glam Foods, LLC. Glam Foods provides cooking/culinary sessions, personal chef services, sports programs, meal planning/budgeting and more. Chef Lam's objective it to "inspire, inform and educate" people on how to create an easy, healthy, and enjoyable lifestyle through cuisine. His motto is “Healthy cooking, healthy living, healthy body.” This is what many people are now seeking.

The Seafood Terrine is representative of Chef Lam's philosophy of cooking. First, it is fusion, combining elements of different cuisines, stemming from his exposure throughout his life with various cuisines around the world. Second, it is made primarily with local produce, which is important to Chef Lam. He tries to cook within the seasons, with whatever is most fresh. Third, it is healthy, something that is extremely important to Chef Lam. He is trying to promote a healthier attitude towards food, but without any sacrifice of quality or taste. This dish certainly had plenty of delicious taste. Fourth, it was memorable, another quality valued by Chef Lam. He wants you to remember his food, for it to stand out among other dishes. He accomplished that with me, as his terrine was the most memorable dish to me at the event. Lastly, he considers what he does as a form of art. That too is appropriate for the terrine.

As the owner of Glam Foods, Chef Lam tries to instill his philosphy and values into his clients. He sees himself more as a coach than educator to assist people with their own cooking. He teaches more than just recipes, but tries to show them a preferable lifestyle with delicious, healthy food at the center. He does more than create food for you, but shows you the reasons behind the cuisine. He is providing similar services to the Waltham Public School system, helping to make school lunches healthier as well as educating the children on healthier alternatives.

I was impressed with Chef Lam's passion, as well as his culinary philosophy. I hope to taste more of his cuisine in the future. If you are seeking personal chef services, or want to to learn more about healthy cooking, then check out the services offered by his Glam Foods.

I'm glad to see Chef Lam featured here. My family and I have had the good fortune of experiencing his home coaching approach to high-quality, high-enjoyment cooking. As one who is not a natural cook, I was inspired by Chef Lam's ability to engage me in the process. His attitude and teaching skills match the extraordinary quality of his culinary creations. I fully recommend a trial lesson with Chef/coach Lam. You'll never cook or eat the same again!