One of the most seminal figures in the history of the wine industry in the Finger Lakes region, and whose importance even extends beyond this region, is Dr. Konstantin Frank. Dr. Frank, a European immigrant, and his family came to the U.S. in 1951. He was professor of plant sciences with a Ph.D. in viticulture and eventually took a job at Cornell University’s Geneva Experiment Station.

Dr. Frank felt that Vitis Vinifera grapes could flourish in the Finger Lakes yet his colleagues were skeptical based on a lengthy history of failed attempts to grow such grapes. It also did not help that Dr. Frank could not speak English. Dr. Frank felt that previous failures were due more to a lack of proper rootstock than the cold climate of the Finger Lakes region. Luckily, he found a sympathetic friend in Charles Fournier, a French champagne maker and president of Gold Seal Vineyards.

In 1962, Dr. Frank founded his winery, Dr. Frank’s Vinifera Wine Cellars, which quickly developed a very positive reputation for producing some excellent wines. Unfortunately, Dr. Frank died in 1985 and his successor, his son Willy, died in March 2006. But Willy's son, Frederick, carries the torch and maintains the winery. The winery continues to receive great praise and is often considered one of the top wineries in the northeast.

The winery produces white, rose, red and sparkling wines, from grapes including Riesling, Cabernet Franc, Pinot Noir, Rkatsiteli, Gewurztraminer, Chardonnay, Lemberger, Merlot, and more. At the Boston Wine Expo, I tried three of their wines and two really impressed me: the 2007 Dry Riesling and 2007 Gewurtztraminer. 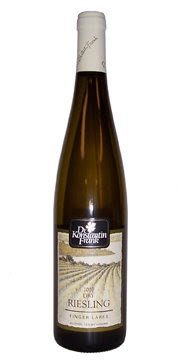 The 2007 Dry Riesling ($16.99) is an excellent example of a Riesling with an Alsatian feel. It had a golden color with lush citrus aromas, especially fresh pear. Its taste was complex, with flavors of green apple, pear and melon alongside its mineral notes. It was a crisp with a lingering and satisfying finish. And at only 12% alcohol, you can have a couple glasses without worry. I really enjoyed this wine and think it would pair well with many foods too. At this price, I think it is a reasonable value and I would highly recommend it. 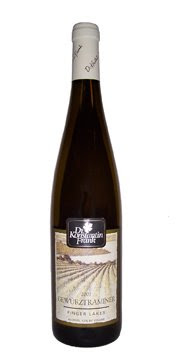 The 2007 Gewurtztraminer ($17.99) also has a very Alsatian character to it. This wine had a bit more green in its golden color and presented a more exotic fruit nose. On the palate, that distinctive Gewurtztraminer spice shined, paired with grapefruit, melon and apricot flavors. Like the Riesling, this wine also had intriguing mineral notes and a nice crispness. The finish was long and spicy and the wine only has an alcohol content of 12.5%. If you like Gewurtztraminer, then you are really going to love this complex wine which is another good buy for the price.

Despite being such an acclaimed winery, their most expensive wine is only $29.99. They definitely are not overpricing their wines. These are wines with an Old World style and which will please even the discerning wine lover.

Locally, their wines are distributed by United Liquors of MA. I will seek out more of their wines to try, such as their 2007 Lemberger and 2007 Reserve Gewurtztraminer

Posted by Richard Auffrey at 5:57 AM