It is rare for me to attend a tasting of 20+ wines and like every single one of them. But it happened recently at a special tasting of boutique wines from Israel. Yesterday, I asked for Israeli wines to get some respect. Now, I am going to give you some specific reasons why those wines deserve respect.

The Israeli Consulate to New England, in conjunction with Richard Shaffer of Israeli Wine Direct, held a wine tasting with five boutique wineries from Israel. The participating wineries include Margalit Winery, Pelter Winery, Flam Winery, Tzora Vineyards and Tulip Winery. The wine makers and other representative of the wineries were present, ready to talk about their wines and answer questions.

I attended a previous Israeli wine tasting in September 2008, and though I tasted some excellent wines, there were a few I disliked. And there were only six wines at the tasting. My main complaint was that a couple of the wines had too much of a green/vegetal flavor that turned me off. So I was pleasantly surprised that at the recent Israeli tasting, I did not find a single bad wine. And this opinion was mirrored by several of my friends who also attended the tasting.

Most of the wines I tasted were not inexpensive, generally costing over $20. Yet they show the potential of Israeli wines, the high quality that they can produce. I would like to see more value wines from Israeli, more wines costing under $15. Such less expensive wines can serve as gateway ambassadors to Israeli wine, especially to consumers unfamiliar with these wines. Such consumers are more likely to take a chance on an inexpensive Israeli wine.

I was pleased as well to see the high degree of passion in the wine makers and representatives. They were rightfully proud of their wines and it showed that their wines were labors of love. Despite any challenges, these are people who will continue to strive to do their best, to produce excellent wines despite the odds.

Now, onto the wines I tasted and enjoyed. 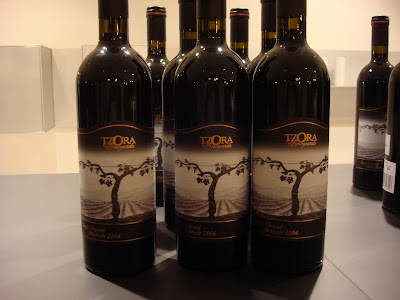 Tzora Vineyards was founded in 1993 by Ronnie James and was one of the first wineries to to plant vineyards in the Judean Hills. Like many other Israeli boutique wineries, James feels that the most important element of winemaking is growing quality grapes. Thus, terroir is very important to James and he spent much time seeking out the best land in the Judean Hills. The winery owns three different vineyards: Giv'at Hachalukim, Shoresh and Neve Ilan. Their winemaker is Eran Pick, who received his degree from the University of California, Davis. He joined the winery in 2006, after spending some time working in Napa, Sonoma, Barossa and Bordeaux.

Tzora was also the only winery at the tasting which was Kosher. Yet that was not really promoted or brought forth. The idea was simply to present their wines as good wines, whether Kosher or not. Unless you examined the bottle, you would not have known the wines were Kosher. And they tasted no different from all the non-Kosher wines at the tasting.

The first wine I tasted was the 2006 Tzora Neve Ilan ($35) which is a blend of 70% Cabernet Sauvignon and 30% Merlot from the oldest plots of the Neve Ilan vineyard. This vineyard is located on the western slopes of the Jerusalem Hills, 600 meters above sea level. The wine was aged for about 18 months in French oak and has an alcohol content of 13.7%, certainly lower than many California Cabernets. I found this wine to have a deep, dark red color and an alluring nose of blackfruit. On the palate, there were flavors of ripe plum, blackberry and black cherry, along with prominent spice. It was a silky, smooth wine, with restrained tannins and a lingering finish. There was plenty of complexity here and a nice balance.

This is a wine I could easily drink on its own or with food. It was certainly an excellent way to begin the tasting, immediately placing me in a very happy mood. I think this wine is reasonably priced for its quality and complexity and it is a wine I highly recommend. I should also note that a number of the Israeli wines had prominent spice notes to them.

The 2006 Tzora Shoresh ($40) is made from 100% Cabernet Sauvignon and comes from the Shoresh vineyard. This vineyard is located about 700 meters above sea level. The wine was aged for about 18 months in French oak and has an alcohol content of 14%. This wine was even darker in color than the Neve Ilan and the nose was maybe a bit more restrained on its blackfruit smell. Taste wise, there were similar fruit flavors as the Neve Illan but there was less spice and the tannins were very prominent. This was to be expected as the first wine had Merlot to help soften it.

This is a wine I would drink only with food, to have something to cut those tannins. It was an excellent wine, just a different style than the first one. It was nice to taste two good wines in a row. Again, I think this wine is reasonably priced for its quality and complexity and it is a wine I recommend. 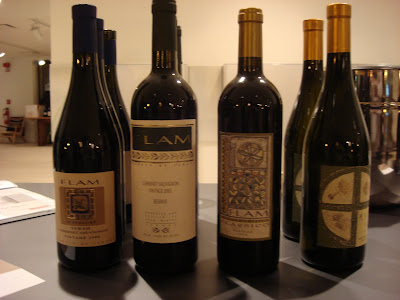 The last wines of the evening I tasted were from the Flam Winery. Brothers Golan and Gilad Flam founded this winery in 1998. Golan, who trained in Italy, is the winemaker and Gilad is in charge of their business strategy. Like Tzora, their winery is located in the Judean Hills. They have a small operation, only producing about 7,000 cases a year.

The 2007 Flam Sauvignon Blanc-Chardonnay ($18.99) was an unoaked blend of 70% Sauvignon Blanc from the Upper Galilee and 30% Chardonnay from the Jerusalem Hills. This wine had a light yellow color and nice citrus on the nose. On the palate, there was plenty of delicious fruit, including green apple, grapefruit and pear. There was also some minerality and none of the grassiness that some Sauvignon Blancs offer. It was a crisp wine with a moderately long finish. An interesting wine that offers some character, elevating it above some one-dimensional wines. A wine that would be good on its own or with food. A great summer wine choice.

The 2006 Flam Classico ($24.99) is a blend of 50% Cabernet Sauvignon and 50% Merlot. The wine is aged in French and American oak for about 6 months and has an alcohol content of 14.5%. This was a very smooth wine, with soft tannins, that provided plenty of lush fruit flavors including black cherry, raspberry and blackberry. There was only the slighest hint of spice though there was also some mild herbal notes too. Another wine that you could drink alone or pair with food. This is the type of wine likely to appeal to a very wide audience.

The 2006 Flam Superiore Syrah-Cabernet Sauvignon ($40) is a blend of 84% Syrah and 16% Cabernet Sauvingon. It spent about 12 months in French and American oak. This was a very spicy wine, and very good! There were plenty of fruit flavors, ripe plum, blueberry and black cherry as well as hints of bacon. The tannins were restrained and the wine had a lengthy finish. Definitely a wine that would be best with food, maybe a nice lamb or wild game dish.

More reviews to come tomorrow.
Posted by Richard Auffrey at 5:59 AM