I didn't just try white wines from the Finger Lakes. At the third winery, Ravines Wine Cellars, I tasted a couple red wines, and a rose, and there is definitely promise there. Ravines Wine Cellars is a small winery which was created by Morten and Lisa Hallgren, a European Winemaker/Oenologist and his Chef/Foodie wife. Their objective is to create "elegant and food friendly wines using Old World winemaking traditions with New World innovation."

Morten was raised in the Provence region of France and his family owned and operated Domaine de Castel Roubine. Morten spent time both in the vineyards and the cellar, learning both viticultural skills as well as the traditional methods of European winemaking. He received an advanced degree in both Enology and Viticulture at the Ecole Nationale Supérieure d’Agronomie in Montpellier, one of the world’s top winemaking schools, and spent his first harvest in Bordeaux, at Chateau Cos d’Estournel.

Eventually, Morten moved to the U.S. and spent six years working as the chief winemaker for Dr. Frank’s Vinifera Wine Cellars. In 2000, Morten purchased his own land and vineyards in the Finger Lakes region. The estate is situated between two deep ravines, which became the namesake for the winery. Lisa Hallgren was pouring at the Ravines table and I was able to chat a bit with her about her wines. 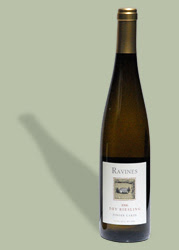 I began my tasting with their 2007 Dry Riesling ($16.95). The winery's goal with this wine is to create their own style of Riesling, something distinct from either Alsatian or German Rieslings. I am not sure it really accomplishes that as it feels very Alsatian to me, as did the other Rieslings from the Finger Lakes. This wines has a nice nose of citrus and on the palate, there are flavors of citrus, especially orange with hints of pear, and mineral notes. There is plenty of acidity and a dry finish. 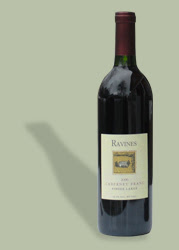 I was hesitant to try the next wine, the 2007 Cabernet Franc ($18.95), because I am usually not a fan of this grape. Too often, I detect a green/vegetal flavor that turns me off though I know plenty of people who enjoy the taste. Lisa assured me though that this wine did not possess such a green taste, as she disliked that taste as well. And she was right! This was a Cabernet Franc I could actually enjoy. It had delicious, lush black cherry and ripe plum flavors with a slight floral aroma. The tannins were mild and it had a moderate finish, ending with a touch of spice. If a winery can make a Cabernet Franc that I like, then it certainly is doing something right.

I also tried their 2007 Pinot Noir ($22), which is made from three different Pinot clones. There is no information about this wine on their website so it may be a new product for them. This Pinot was more Burgundian in style than California. It was a light red wine with fresh cherry and raspberry flavors. A very easy drinking wine though it did not impress me. 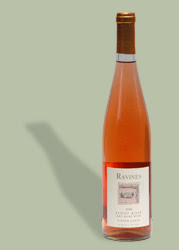 The 2007 Pinot Rose ($14.95), made from 100% Pinot Noir, was something that impressed me. That should no surprise me as I very much enjoy Rose from the Provence region of France, and Morten has tried to emulate that style. He has succeeded, creating a very dry, Old World rose with delicious, muted strawberry flavors. It has an appealing pink color and an enticing nose. This is a perfect summer wine, very food friendly and something I would actually drink year round. I highly recommend this wine!

Locally, their wines are distributed by Winebow Northeast so if you don't see them at your local wine store, ask if the can get them.

In the end, I tasted wines at the Boston Wine Expo from three Finger Lakes wineries and found wines I would recommend from all three of them. They certainly make some impressive white wines in the Finger Lakes region. My successes will also lead me to try even more wines from this region and I hope you will give their wines a try as well.
Posted by Richard Auffrey at 5:58 AM

Very nice review. I can't wait to try their 2007 Cab Franc (though I confess I love the green character that often comes with CF). Must say I'm a bit surprised you didn't much like the 2007 PN; their 2005 PN was my "Grail Red" of the Finger Lakes -- the wine that proved to me that the FL can produce occasional greatness in reds.

Hi Evan:
Thanks! Could be differences in vintage about the Pinot. Have you tried the 2007 yet?

I did like it enough to try it again if I had the chance. It just happened to not impress me this time.

Good Review Richard! I am curious. Did you try the '07 Gewurz? I have not been over to try it yet, but I have been very impressed with the '07 Gewirz's that I have tasted. I see on Ravines website that there was only 25 cases produced, so maybe that is not available for tasting?
-Finger Lakes Weekend Wino

Hi FLWW:
Thanks! I did not try their 07 Gerwurtz though I suspect it would be excellent as that is a grape that seems to do well in the region.