One of the highlights of the Boston Wine Expo weekend did not even take place at the Expo. It was a special Expo After Party held at the Boston Wine School and hosted by Jonathon Alsop. It was an intimate party with wine lovers, bloggers, wine makers, distributors and more. There was plenty of delicious food (including some superb duck breast), interesting wines as well as lots of enjoyable conversation.

It was a pleasure to meet numerous new people, some whom I have only talked to before online. I met the personable Marco Montez, owner of the Travessia Urban Winery in New Bedford. I really need to visit his new winery soon. Dave and Kathy Roberts, owners of Truro Vineyards, were also there. And that is another winery I should visit in the near future. The hyperkinetic Gary Vaynerchuk of Wine Library TV made an appearance and I spoke with him briefly. I spoke to numerous other interesting people over the course of the night and it was lots of fun. Everyone seemed to enjoy themselves immensely.

Several wines really impressed me, most from the same distributor, ENO-Mass/Vinifera Imports Ltd., who import artisanal Italian wines. I knew their representative, Marc Bergeron, who had previously attended the Wine Writers course with me last year. Marc has brought other wines to the monthly Wine Writers Group meetings, and they usually are excellent. At the Expo After Party, he had three wines that especially thrilled me.

Castello Romitorio is a 12th century hilltop fortress in Montalcino which was purchased in 1984 by famed artist Sandro Chia. Sandro renovated the castle, planted vineyards and constructed an impressive winery. He hired Carlo Ferrini to be his wine maker and Sandro's son, Fillipo, helps out as well. Sandro also provides the intriguing artwork for their wine labels.

The 2007 Castello di Romitorio Costanza, IGT Toscano, is a blend of 80% Vermentino and 20% Chardonnay and priced in the low to mid-$20s. The wine is named "Costanza" in honor of one of Sandro's daughters. The grapes are hand-harvested from vineyards in Montalcino and Scansano. The wine sees about four months in oak and has an alcohol content of 12%. Only 5000 bottles were produced of this wine.

This wine had an enticing nose of citrus and floral notes, making me want to taste it. On the palate, the wine fulfilled the promise of its nose. Flavors of green apple and pear combined with some minerality. It was a very crisp wine with a lengthy and satisfying finish. This is a wine you could easily drink alone or pair with food. The oak added only hints of spice, still allowing the fruit to shine. Everyone who I knew tried this wine really loved it and I highly recommend this wine.

On the other end of the spectrum, the 2004 Castello Romitorio Brunello di Montalcino is made from 100% Sangiovese Grosso. It usually retails for $80-$90+ so it is not cheap. But this is an exceptional wine, though it should probably be cellared for a time. The 2004 vintage was considered superb, one of the best years in the last 15. This was an intense wine, with a myriad of complex flavors including rich dark fruit and spicy notes. You can taste plenty of other flavors too, from violet to chocolate. The wine is fairly tannic but some cellar aging will smooth it out. It is an impressive wine with lots of potential. 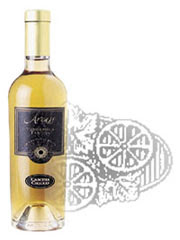 From white to red, and now a dessert wine. The NV Cascina Chicco Arcass is from the Piemonte region and is made from 100% Arneis. I have never seen a dessert wine using Arneis before so this was a treat. This wine, in a 375ml bottle, costs in the mid to high $40s and has an alcohol content of 12.5%. The wine is a late harvest in the passito-style where the grapes are dried for several months before pressing.

I found the Arcass to have a fine amber color with a compelling nose of apricots, citrus, honey and dried fruit. It is a full bodied wine with intense and complex flavors, being sweet without being cloying. It was a wow wine, very unique in its flavor profile and with a lengthy, satisfying finish. If this is the type of wine that Arneis can produce, then more producers should be making it. This dessert wine would pair with many different types of desserts, especially if there is fruit involved.

Hopefully this was only the first of many more Expo After parties that Jonathon will hold. The size of the venue, the Boston Wine School, will keep the party on a small scale, and thus more intimate. That allows you a better opportunity to chat and socialize with the others, as well as to enjoy all of the food and wine. It was a memorable evening and I am very glad I attended.
Posted by Richard Auffrey at 6:00 AM

Hi Richard, it was a pleasure for me also to finally meet you and your wife in person. I actually did not spend as much time speaking with you as I would have liked. Maybe one day soon we can sit down and talk wine & life. I look forward to "bringing" you down to New Bedford. My winery is a very small venue in the area, just trying to get off the ground. There is a lot to do in this city, including some good traditional restaurants and great fresh seafood. Let' keep in touch.

Hi Ken:
It was very nice to finally have gotten to meet your wife. And it is always good to see you as well.