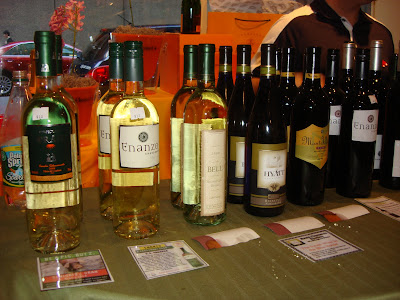 It is a compelling trio: wine, cheese and cupcakes. Add in a group of bloggers and you should have quite a fun evening. And that is exactly how I spent part of last night.

Meghan of Travel Eat Love (with her recap) and Michelle from Fun and Fearless in Beantown arranged this event, a blogger meet-up at the Boston Wine Exchange. Attending bloggers and writers included Jackie of the Leather District Gourmet, Elina of Healthy and Sane (with her recap), Melissa of Crunches for Cupcakes, Kirsten of Tales From Two Cities, Alicia of the Clean Plate Club, Michell

e of The Economical Eater (with her recap), Megan of Delicious Dishings, Lara of Good Cook Doris, and Justin. (I hope I did not miss anyone).

It was great to see people I already knew, as well as get to meet others, some who I had only previously known on Twitter. As I have said before, wine and food shared with friends is far better than if you eat and drink alone. Fortunately, the Boston+ food and wine blogger community is fairly friendly, and often meet at a variety of events.

There were nine wines for us to taste, and at least six different types of cheeses from Cabot of Vermont (represented at the event by EastieGal). There were a few of the usual cheddars, plus some nice spicy varieties as well.

Here are a few wines from the tasting which most interested me:

The 2008 Bodegas Ortiz Senorio de Oran Blanco Pardina ($10) is from the small and relatively new Spanish D.O. of Ribera del Guadiana in the Extremadura region. The wine is made from the rare Pardina grape, which is indigenous to this region, and is a new grape to me. The winery owner also owns a pig farm. This was a simple wine, crisp, light and fruity. A pleasant summer wine though lacking complexity.

The 2006 Monte Volpe Primo Rosso ($12) is a California wine, from Mendocino county, but is a red blend, including some Italian varietals. The blend is 65% Zinfandel, 15% Carignane, 10% Petite Sirah, 5% Sangiovese, 3% Negromaro, and 2% Nebbiolo. The wine was aged for 18 months in oak and has an alcohol content of 14.5%. It was quite delicious, an easy-drinking wine but with some depth and complexity. Plenty of red fruit flavors, with some hints of spice and vanilla. Mild tannins and a decent finish. A good BBQ, burger or pizza wine. At this price, a very good value too.

The 2005 Castellroig Negre 'Vi de Terrer' ($20) is a unique Spanish wine. It is a blend of 70% Ull de Llebre (Tempranillo) and 30% Merlot. It is from the D.O. Penedes and is 100% organic. This winery is also the first, and only one so far, that is permitted to use the "Vi de Terrer" (terroir wine or estate) designation, which was created in 2002. To receive that designation, a wine must be 100% organic plus the soil and climate must be extensively analyzed to show its terroir. I do know that this wine was quite good, with a bold taste but which was not overly tannic. There were prominent black cherry, blackberry and plum flavors with hints of vanilla and a spicy backbone. The finish was long and satisfying, and the wine had plenty of character. An excellent wine at a reasonable price, especially considering it is also a low production wine. 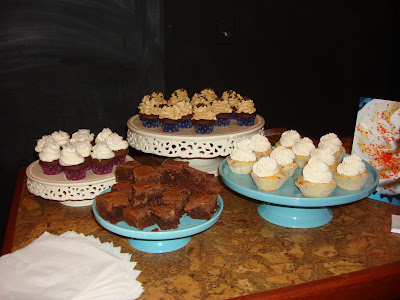 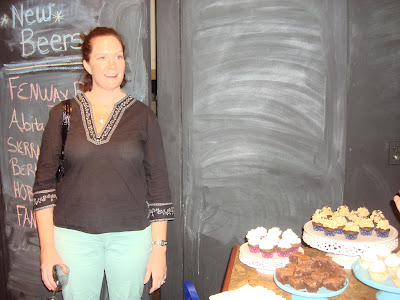 After the wine, we adjourned to the rear of the store where we met Kelly of the new Mix Bakery, and got to sample some cupcakes and brownies. Earlier that day, some of us were involved in a discussion over the use of "moist" when describing baked goods. Some disliked the term, yet they could not offer an acceptable alternative. To me, no matter its shortcomings, I think it is the best word to describe what we mean. And everyone understands what you mean when you use the term. "Moist" is certainly better than alternatives like well lubricated, clammy or dank.

I tried two of the cupcakes and the brownie (not tasting the third because it contained peanut butter). Now, you all know that I have high standards for my cupcakes, so how did these measure up? First, I liked the brownie, which was properly fudgy, my preferred style of brownie. Second, the rhubarb cupcake with a vanilla cream topping, was surprisingly delicious. I am not usually a rhubarb fan, so was a little leery about the cupcake, but this was quite good. It was nicely moist and the vanilla cream was smooth and not overly sweet. A success. The Mounds-style cupcake, with chocolate and coconut, had a very nice taste but could have been a bit moister. It definitely had good flavor, and the cream was once again smooth and not too sweet, but the cake itself was still a bit too dry.

Overall, Kelly did well, though with a little room for improvement. I think her frostings are much better, creamier and lighter, than the usual cupcake frosting, which tend to be too thick and sweet. It is clear that her cupcakes can be properly moist, and there are reasons why the chocolate cupcake may not have been up to par this time. So, I'll have to check out more of her cupcakes in the near future. The menu does have some other intriguing items, such as banana cupcakes, marshmallow buttercream and even Twinkies.

Thanks again to Meghan and Michelle for organizing this event, and thanks to all the bloggers and writers who made it enjoyable.
Posted by Richard Auffrey at 3:30 PM

Great recap - again, it was so nice to finally meet you! And I love how many times you managed to use the word "moist" in this post...

Fun and Fearless in Beantown said...

Great recap! Thanks again for coming and even for your impromptu sake tutorial!

This looks like such a fun event! When's the next one?! :)

Thanks Michelle and it was good to meet you as well. I am sure we will meet again at future events.

And thanks to you as well Michelle, especiall for organizing this event.

Hi SBK,
I am sure there will be another event in the near future, though no dates have yet been determined.

I love wine and enjoyed your post a gread deal!

Sounds like you guys had a great time! Let me know when the next one rolls around. I'd love to join in the fun.