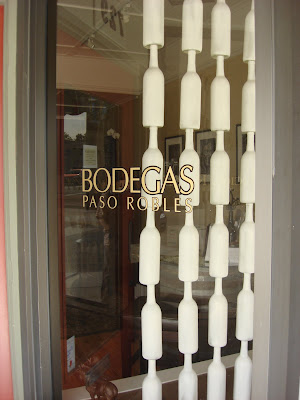 As I mentioned before, my free time during my Paso Robles trip was very limited so I had a small window of opportunity to explore the downtown tasting rooms. Near the end of my visit to Anglim Winery, Steffanie Anglim graciously called Dorothy Schuler, the owner and winemaker of Bodegas Paso Robles, and arranged a private appointment for me to visit her tasting room.

I wanted to visit Bodegas Paso Robles because I knew they produced wines made from Spanish and Portuguese grapes, and that certainly interested me. Plus, it was different from many of the other local wineries, which were more concentrating on Rhone varieties as well as the usual suspects. I was seeking something more unique and I certainly found it.

Dorothy Schuler was once a writer, contributing to magazines like Cycling, which certainly seems a far way from wine. She was also passionate about art, tithing some of her income to arts-related projects. The idea for a winery began with her husband and his partner, a salesman, and Dorothy was only going to be involved in doing some of the paperwork. Yet fate intervened, turning expectations over on its head.

First, the partner had to pull out of the endeavor and then Dorothy's husband had to go to the United Kingdom for business. So Dorothy was left on her own with the winery, encouraged by her husband to operate it. That is certainly a radical change from just doing the paperwork. Dorothy rose up to confront this challenge, locating a mentor who taught her how to make wine, especially Iberian-style wines.

Dorothy's passion for winemaking grew and she chose to produce only wines made from Spanish and Portuguese grapes because she felt it was a perfect niche market. When she began, she was one of the first local wine makers to use Tempranillo and it was not even commercially available at the start. She purchases all of her grapes, locating growers across California who have the Spanish and Portuguese grapes she desires. It has not been easy, and she has had to educate consumers and others about these grapes. Plus, she is continually experimenting, trying to produce better wine all the time, as well as using different grapes and blends.

In 2002, she produced her first vintage of only 300 cases. Currently, Dorothy makes about seven different wines, with additional ones due in the near future, and production of each wine remains limited, from about 18 cases up to 500 cases. It is a true boutique winery.

Dorothy is an interesting character, very pleasant and obviously passionate about her wines. It was a real pleasure to taste her wines and I am very glad that I chose to stop here. The wine world needs more winemakers willing to experiment, to make different wines, and to test the boundaries. 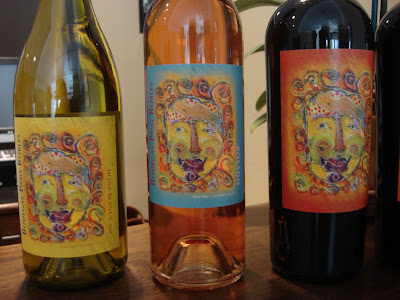 The labels for most of the wines have an intriguing piece of artwork on them, a monoprint Cara Bella by Dorothy's good friend Morse Clary. The background color on each label depicts the flavors in the wine.

The wine tasting was very cool, with Dorothy generously opening a couple older vintages so I could compare them to the current releases. She also had me compare the tastes of some of the wines to different ones, to get a better idea of the nuances of each individual. It was a fun and revealing tasting, showing the unique differences of the wines.

I started by tasting the 2002 and 2005 Solea ($34), a blend of Tempranillo and Graciano. For 2005, the blend was 86% Tempranillo and 14% Graciano. In 2002, the blend was a bit different, with less Graciano, which is hard to come by in California. The two grapes are fermented separately and blended one year before bottling. The wine's appellation is Central Coast, from the Santa Ana Valley Vineyard (Tres Piños). The 2005 spent 23 months in French oak, has an alcohol content of 13.9% and only 121 cases were produced.

The 2002 Solea was a bit funky on the nose, and probably could benefit from decanting. On the palate, it had bright fruit flavors of blueberry, plum and cherry with some pronounced earthiness and underlying spice. In comparison, the 2005 had more pronounced fruit and much less earthiness. Both wines were smooth, complex and had lengthy and pleasant finishes. The 2002 reminded me more of a traditional Spanish wine while the 2005 was more like the new style Spanish wines.

Like the 2002 Solea, the 2002 ¡Viva Yo! had some funk on the nose. The fruit flavors were also more subdued, making this a more elegant and subtle wine. In comparison, the 2005 was fruitier but had rougher tannins, and probably needs more time in the bottle. It is a simpler wine than the Solea, and much more of an every day wine to drink with dinner.

I was very impressed with the 2006 Graciano ($36), which is made from 100% Graciano, a rarity for any region. Dorothy has had difficulty purchasing Graciano grapes, and there are few plantings in California. It does not help that it is usually a low yielding grape. This was the first vintage she was able to produce and used 100% Graciano. The wine's appellation is Central Coast, from the Santa Ana Valley Vineyard (Tres Piños). This wine spent 23 months in French oak, has an alcohol content of 13.5% and only 167 cases were produced.

The Graciano had a compelling and fragrant nose, primarily cherry and floral notes. On the palate, it possessed lush flavors of cherry and raspberry with hints of floral and spice. The more I paid attention to the wine, the more flavors that seemed to flit about my mouth. It had much more complexity than I expected, and a deliciously long finish. A bright, vibrant wine, this is probably something that will age for some time, evolving even more complexity. I had to buy this wine, as the taste was so satisfying, and it is definitely unique. 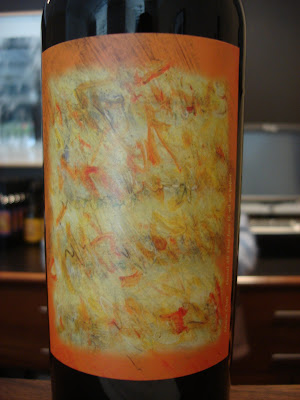 The 2003 Iberia ($44) is an intriguing blend of 32% Touriga Nacional, 30% Graciano, 30% Tempranillo, and 8% Tinto Cão. Each varietal is fermented alone, barreled for one year, and then blended and returned to barrel for almost another year. The wine's appellation is California, from the Blair Vineyard Spanish Block in Calistoga, Napa Valley. This wine spent 23 months in French oak, has an alcohol content of 14.8% and only 192 cases were produced. This wine had just been released.

I found this wine to have that unique Portuguese aroma to it, a compelling smell I associate with their indigenous grapes. It is very alluring and exotic, something I can just sit and savor, even without taking a sip. Its taste too reminded me of a Portuguese wine, with dark fruit flavors, spice and a certain exotic flair to it. Tannins were mild and it was like liquid silk in my mouth. Lots of complexity elevated this wine, as well as its lengthy and interesting finish. If I had tasted it blind, I would have said it was from Portugal rather than California. It is pricey, but you are getting a lot of wine for your money.

If I thought the 2006 Graciano was unique, it had nothing on the 2006 and 2007 Pimenteiro ($36). This is made primarily from the Trousseau grape, also known as Bastardo and about 25 other names. This is a rare grape, especially in the U.S., and most famously is used in making Port. To find a wine made predominantly with Trousseau is extremely rare. The budwood for these vines came from the El Gavilan Vineyard, which was planted in 1890 by Portuguese immigrants. The wine's appellation is Central Coast, from the Siletto and Santa Ana Valley Vineyards (Tres Piños).

The 2006 Pimenteiro, the first vintage of this wine, was made from 100% Bastardo and only 18 cases were produced. "Pimenteiro" means “pepper pot” in Portuguese and the wine is very appropriately named for black and white pepper dominate the aroma and taste of this wine. There are underlying fruit flavors, ripe plum and blueberry, but the pepper certainly takes front stage. Complexity, a long finish and lots of character. It was a very unique and compelling wine to me, and I very much enjoyed the taste. This would be an excellent food wine, especially with something hearty to stand up to the peppery flavors. I had to buy a couple bottles of this wine and would highly recommend it.

For those who might not want so much pepper, you can try the 2007 vintage which is a blend of 90% Bastardo and 10% Tempranillo. The Tempranillo is supposed to tame some of that peppery flavor. This wine also spent 22 months in French oak, has an alcohol content of 14.5% and only 76 cases were produced. I did not have a chance to taste this wine, but Dorothy generously sent me a bottle which is now sitting in my cellar. I can't wait to compare it to the 2006 vintage.

Lastly, I tasted the 2008 Doña Blanca ($19), a blend of 60% Grenache Blanc and 40% Malvasia Bianca. The wine's appellation is Paso Robles, from Nevarez (Grenache Blanc) and French Camp vineyards (Malvasia Bianca). The wine spent 7 months in French oak, has an alcohol content of 15% and only 223 cases were produced.

The alluring nose on this wine had pleasant floral notes and citrus smells. It was a crisp, dry white wine with delicious melon, pear and orange peel flavors. There was a subtle exotic flavor to the wine as well, almost a tropical taste to it. An excellent summer wine, good on its own or pair it with seafood or a salad.

Dorothy is making some very interesting and delicious wines, and she will be producing even more in the future, such as the Vaca Negra (a blend of Monastrell and Tempranillo), a GTM (Garnacha, Tempranillo, Monastrell), an Albarino and a 100% Tempranillo wine.

Unfortunately, these wines generally are not available in Massachusetts but you still can obtain some of her wines. Dorothy is one of the participating female winemakers for Women of the Vine. This unites female winemakers under one brand to showcase their diverse talents, and their wines are available in Massachusetts. For this label, Dorothy has produced the Napa Valley Napa Rojo and the Paso Robles Tempranillo.

If you visit Paso Robles, you really must make an appointment to visit Dorothy at Bodegas Paso Robles. She is a passionate and interesting wine maker producing some unique and delicious wines. My visit to her tasting room was certainly a highlight of my trip, and I can't wait to share some of the wines I bought with good friends.

We tasted several of her wines at the Wine Cave in Montrose, CA last weekend. Dorothy has a great story and even better wines. We really liked them. Took home the Solea, Dona Blanca, Viva Yo, Graciano, and Pimientero.

I just tasted Dorothy's albarino. She calls it Galicia. I love it. It was great with fish and has nuances of melon and citrus.
J. Rich

Glad to see others enjoying her wines too.