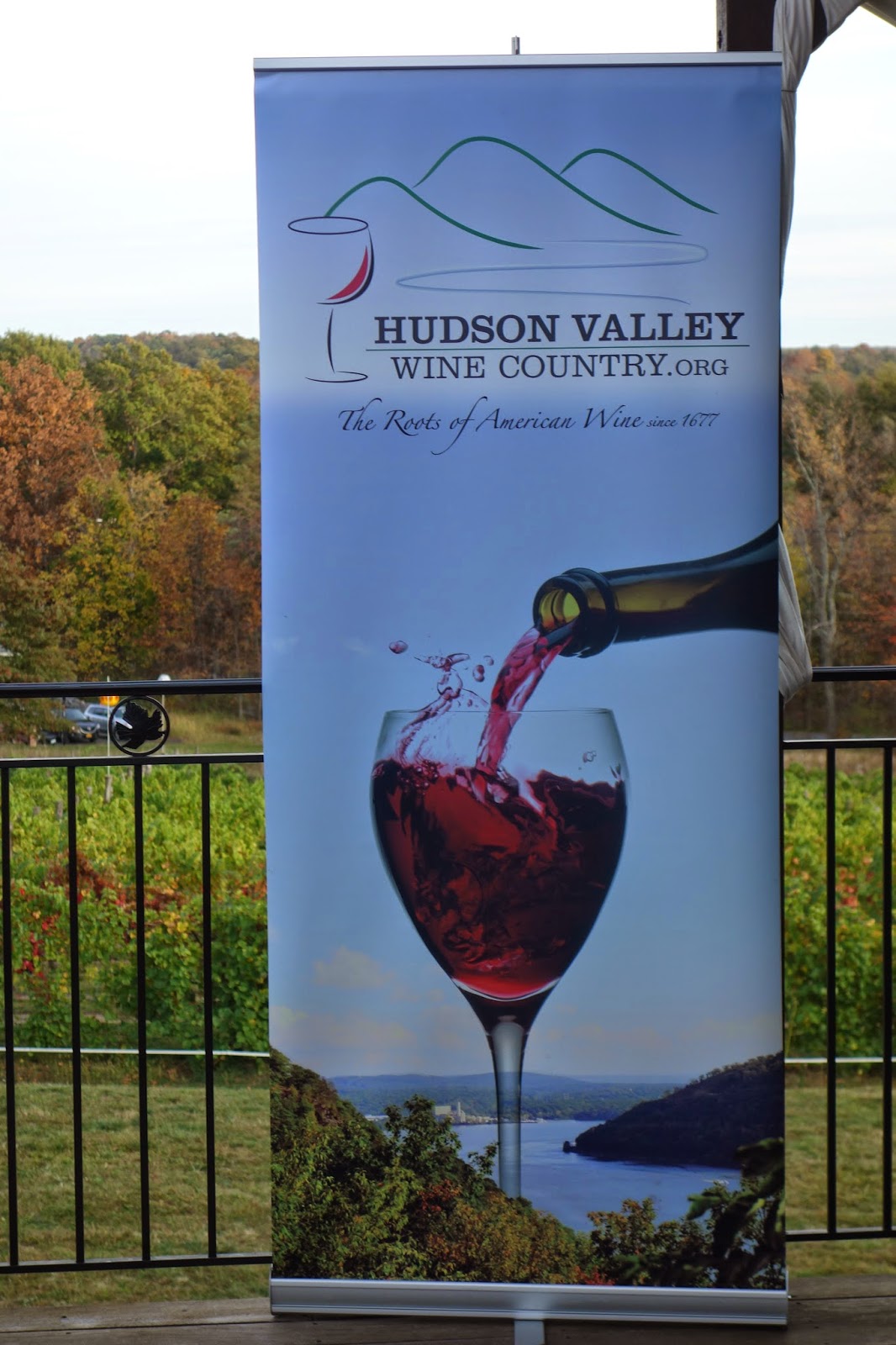 "In early eighteenth-century New England, the most popular alcoholic drink, in terms of volume, was locally produced cider. Throughout much of this period, cider served as a currency. It was used to pay salaries and product prices could be quoted in barrels of cider."
--Drink: A Cultural History of Alcohol by Iain Gately

When Europeans settled in America, apples were one of the first crops they introduced to the country. It is believed that the first cultivated apple trees were planted in the region which would eventually become Boston, as early as 1623. Apple trees spread through the colonies and by 1647, apples were grafted onto wild native rootstocks. A significant proportion of those apples ended up being made into hard cider. By 1775, about 10% of the farms in New England owned and operated their own cider mills.

Until Prohibition, the Hudson Valley region was the unofficial headquarters for hard apple cider. However, Prohibition wrought significant changes to the orchards of the Hudson. As cider apples are usually very sour and not great for eating, many farmers chose to replant their orchards with eating apples. Once Prohibition ended, not much changed and recently, from 2002 to 2007, the number of apple orchards in the Hudson decreased by about 25%. However, change is in the air once again and this time the change is beneficial for hard cider.

As you may know, the state fruit of New York is the apple, and it is also the second largest producer of apples in the country, with Washington occupying first place. Michigan, Pennsylvania and California take the next three spots. New York though grows more varieties of apples than any other state.

In the last few years, the Hudson Valley region has seen a resurgence of apple cideries. In 2001, there were only about five cideries in the region and that number has now grown to 23. This was helped by a new law, passed in 2013, that allowed farms to operate cideries, offering them tax breaks and other economic benefits. With the growing popularity of hard cider across the country, Hudson is poised to benefit from this growing trend.

During TasteCamp, we had the opportunity to sample hard ciders from numerous cideries, and overall I was pleased with what I tasted. They generally were produced from New York apples, not juice, and most tended to be more dry than sweet. There was also some intriguing experimentation being done by some of the cideries, a willingness to expand what cider could be. 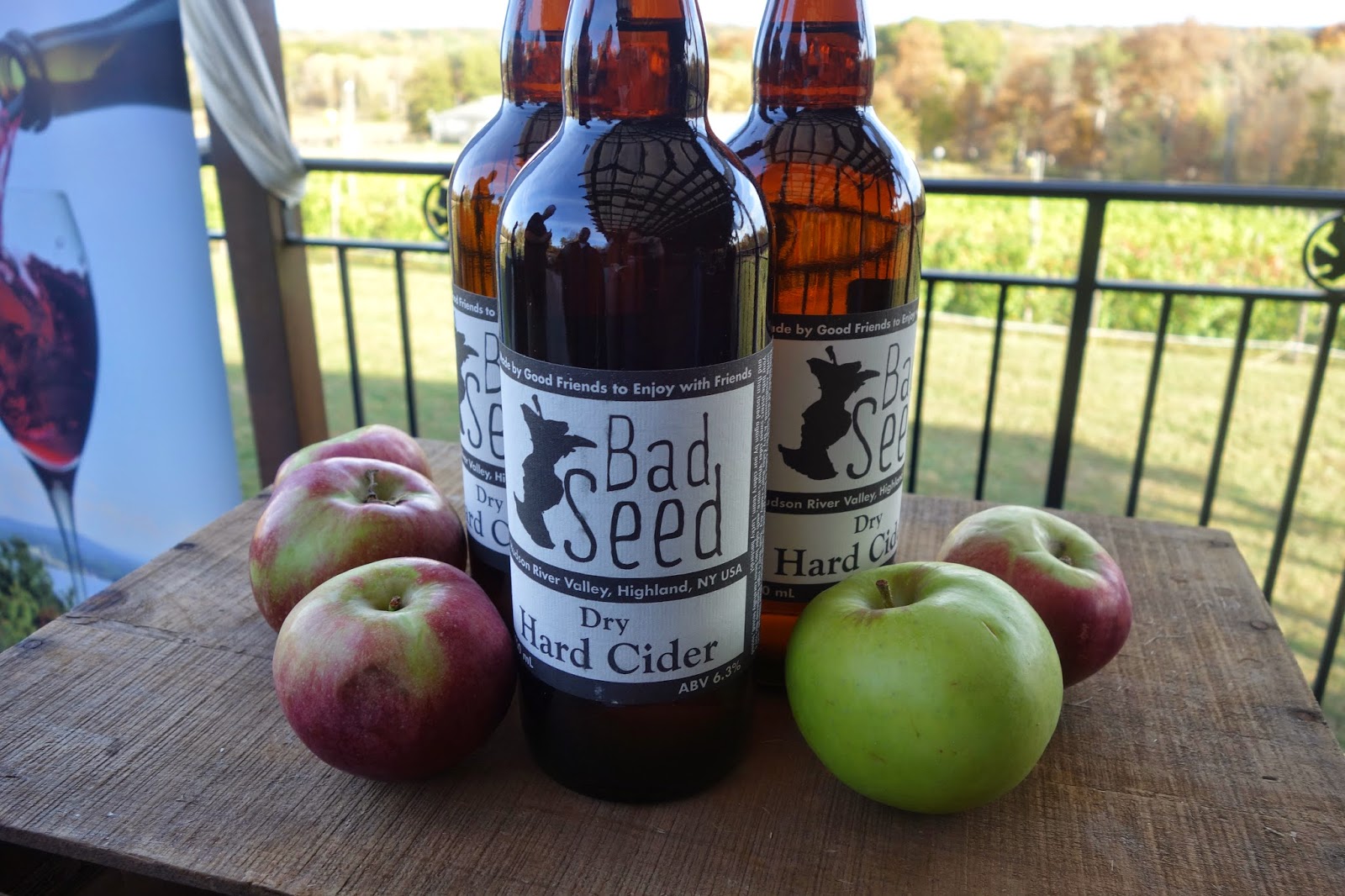 The first Hudson Valley hard cider I tasted during Taste Camp was the Dry Hard Cider (750ml/$11.99) from Bad Seed Cider, located in Highland, New York. Founded in 2011, the cidery was started by Albert, a 6th generation apple farmer, and Devin, a brewer and fermenter. Their apples are from Wilklows Orchards, a 60 acre estate located close to the cidery. For their cider, they use 100% fresh pressed apples, with a Winesap apple as the base and a mix of other varieties added into the base. It is made in small batches and is unfiltered. The Dry Hard Cider, with a 6.3% ABV, is very dry, with dominant apple flavors, and a light effervescence. It is refreshing and tasty, the type of dry cider I prefer. They also make a Belgian Abbey Cider and Bourbon Barrel Reserve, though I didn't get a chance to taste them. 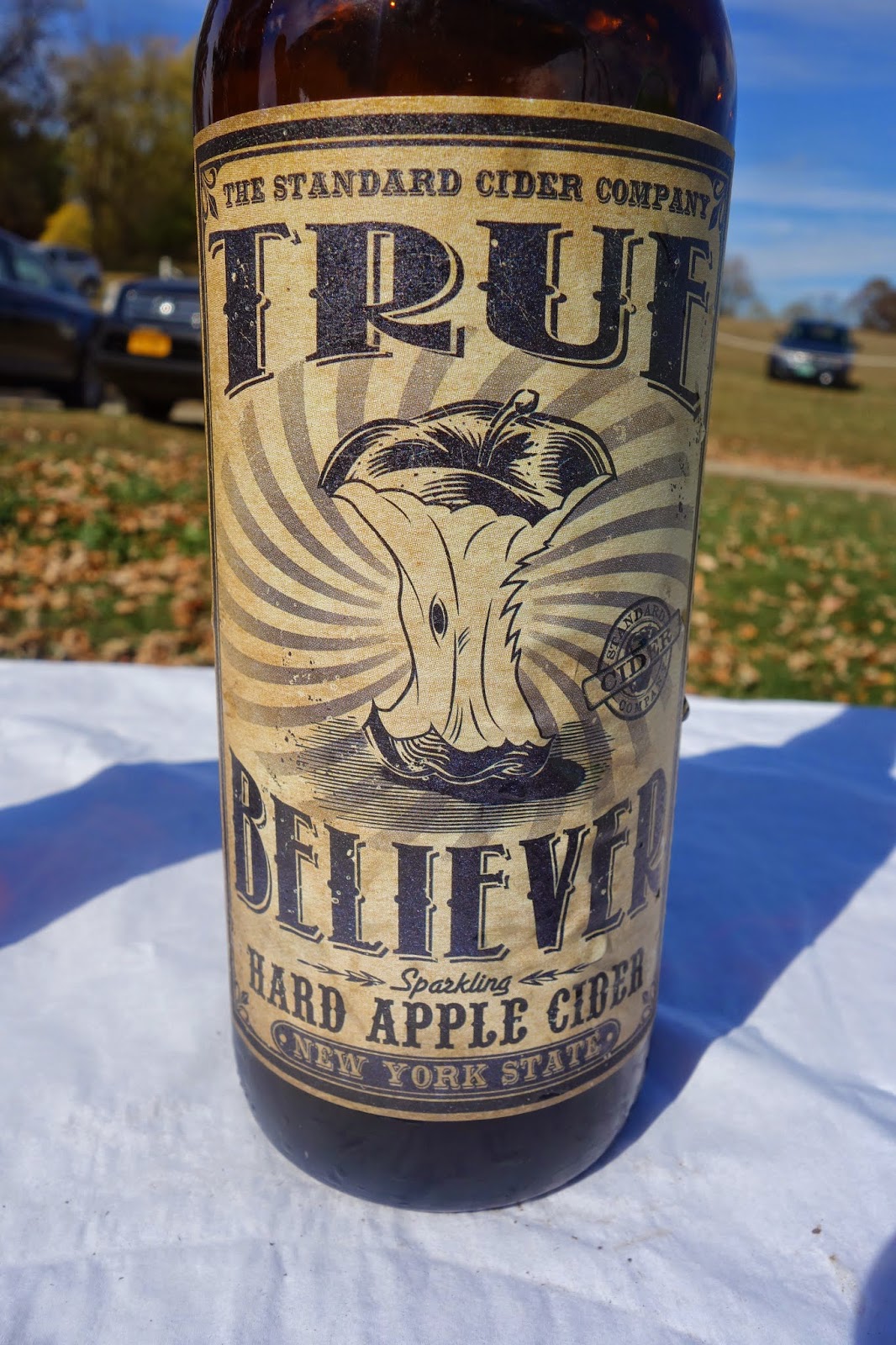 The origins of this cider are a bit vague, and online searches have uncovered some different information. The Peconic Bat Winery, located on Long Island, created The Standard Cider Company to produce their True Believer Hard Cider brand. I've seen reports that they have sourced their apples from Long Island, the Finger Lakes and the Hudson Valley. It seems the latest info may be that they are now sourcing from the Hudson, creating their True Believer from a blend of five eating apples, including Cameo, Golden Delicious, Jonagold, Fuji and Granny Smith. They do not apparently use any cider apples.

The True Believer, with a 7% ABV, is lightly sweet with fruity apple flavors, a medium effervescence, and some spice notes, especially on the finish. It lacks the tartness you often find in cider made with cider apples. The True Companion, also with a 7% ABV, is made with natural ginger, and that ginger aroma and taste is very strong, with fruity apple notes beneath the ginger. If you love ginger, this cider would appeal to you. 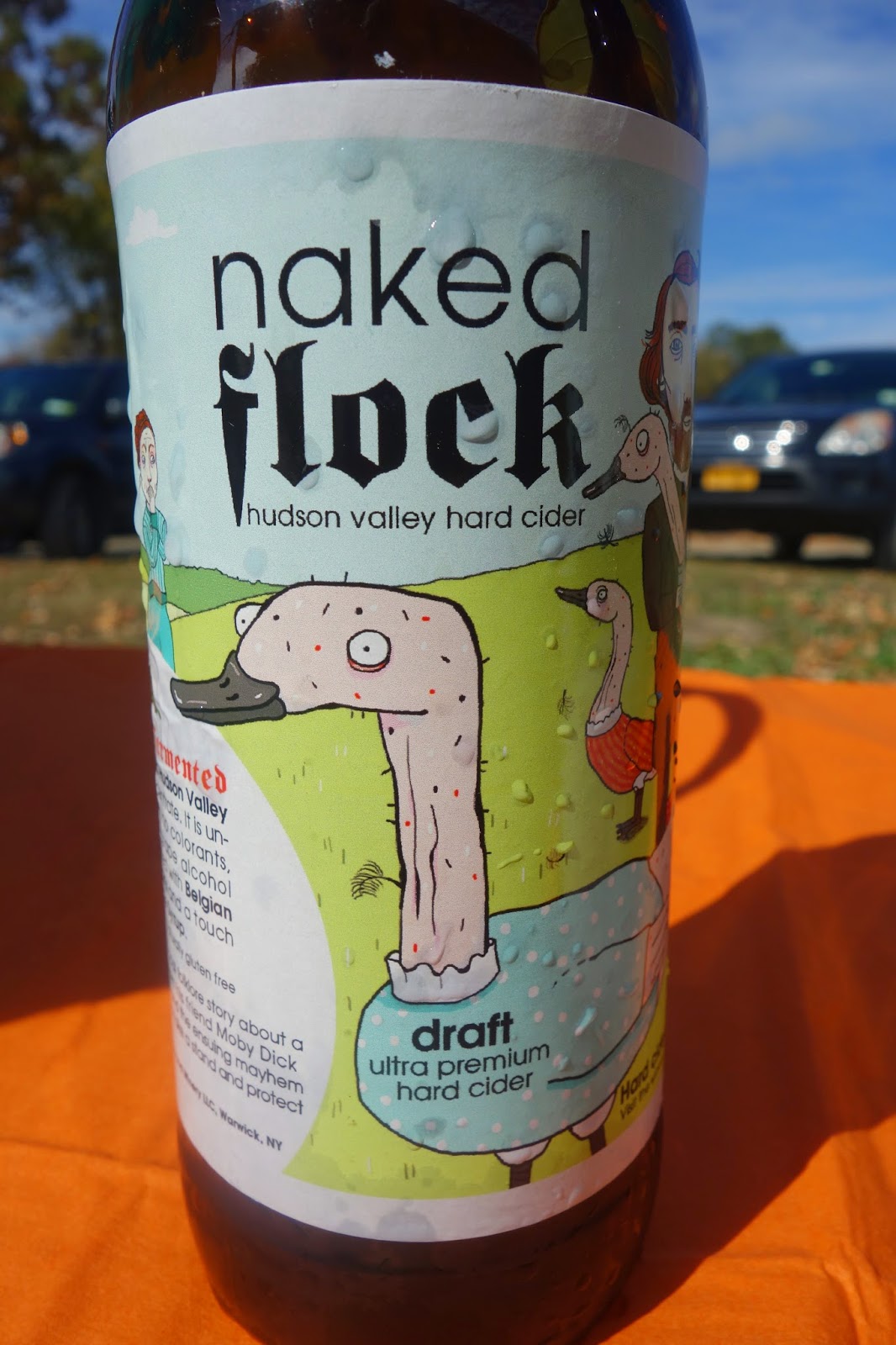 The Applewood Winery was founded in 1993, but siince the 1950s,the farm had substantial apple orchards, and they now produce both wine and hard cider. They make three different types of hard cider, under the Naked Flock label, including the Original, Draft and Pumpkin. About 2.74 pounds of apples go into every bottle of their cider. I only tasted their Draft, which is made to be a drier style, with Belgian Trappist Ale yeast and organic Maple syrup. The cider was generally dry and crisp, with only a hint of sweetness, and a rich apple taste and a fuller body. There was also a few spicy accents in the cider, almost fleeting flavors. An interesting and satisfying taste. 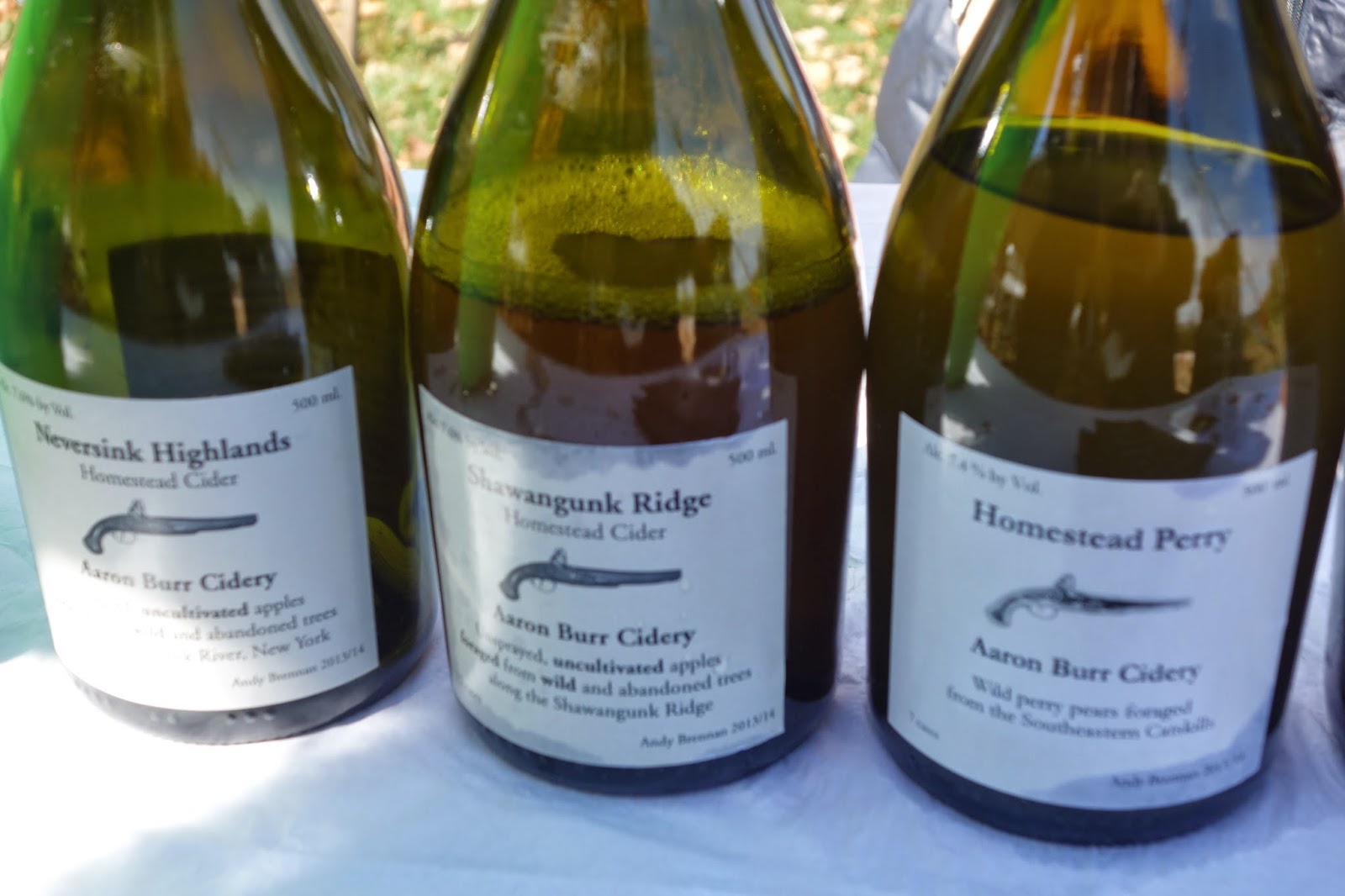 Some of the most interesting ciders were produced by Aaron Burr Cider, located in Wurtsboro, New York. Their small farm dates back to the 19th century and Aaron Burr was once the executor of their land, which is part of the reason for their name. They grow only cider apples, and use only foraged fruit, making them very different from the other cideries. They also wanted to replicate the ciders from the past, what they were like when cider was the most dominant drink of the region, and that is another reason they chose a name from the past for their brand.. In 2013, they produced about 9 different ciders, and most of them will age well, generally from 2-5 years.

The 2013 Homestead Cider: Neversink Highlands is produced from unsprayed wild and abandoned apples and crab apples from various east Sullivan County locations. It has a 7.6% ABV, and is very dry and crisp, with an intriguing and complex blend of flavors, from tart apple to some earthy notes. It possesses plenty of effervescence, and has a lengthy finish adding some dark spice notes. Highly recommended.

The 2013 Homestead Cider: Shawagunk Ridge is produced from unsprayed wild apples from various Bloomingburg/ Otisville area homesteads. It has a 7.6% ABV, and is semi-dry with nice acidity,and once again, a complex blend of flavors including tart apple but also some minerality.,On the finish, there were some pleasing herbal notes. This is a very good cider but I personally preferred the Neversink flavor profile.

The 2013 Homestead Perry is made from true perry pears from unsprayed wild trees along the upper Neversink River, Dry, with mild tannins and restrained pear flavors, this was a more elegant cider with a mild effervescence. On the finish, there were some floral and honey notes. An interesting taste, and I was glad to see at least one Perry during TasteCamp.

The most unusual cider was probably the 2013 Appinette, which is a blend of 70% apples (Idared, Russets and Spy) and 30% Traminette grapes. On the nose, it had Muscat aromas and it tasted to me like an apple-flavored, sparkling Gewurztraminer. Though that sounds strange, I actually found it interesting and likable. It straddles the line between cider and wine, but if you want to taste something different, though still tasty, give this a try. 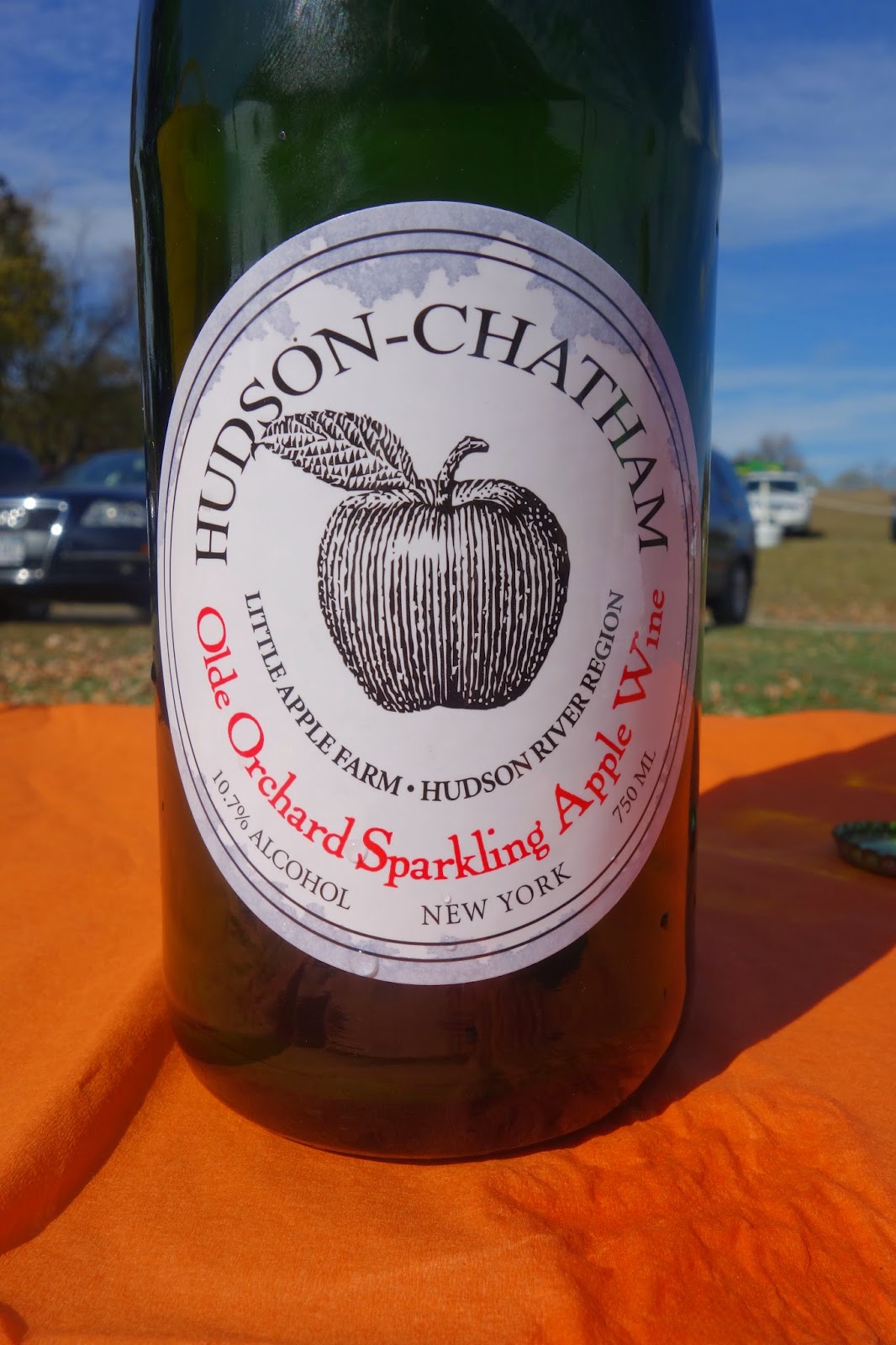 The Hudson-Chatham Winery makes Olde Orchard Sparkling Apple Wine, which cannot be labeled as a hard cider as it has a 10.7% ABV. However, it drinks like a cider, with a very dry and crisp taste, tart apple flavors, a mild effervescence, and some subtle herbal notes. A very pleasing taste, it pairs well with food and would be a refreshing drink on a summer day.
Posted by Richard Auffrey at 4:00 AM