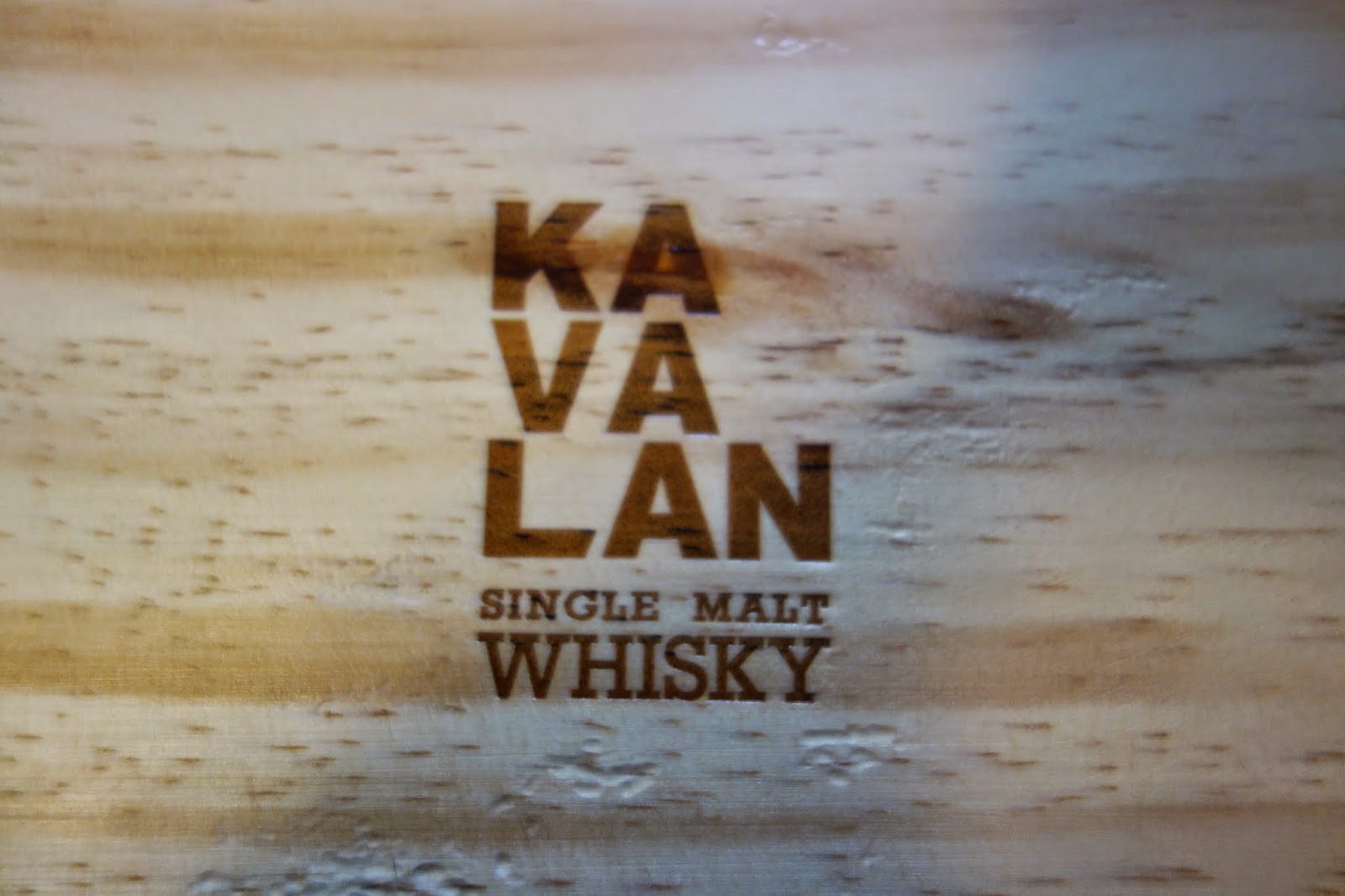 During the last approximately hundred years, Japanese whiskey has taken the world by storm, winning plenty of international awards and thrilling the palates of whiskey lovers everywhere. It is not the only Asian country which is involved in whiskey, and you will likely soon hear more and more about an island in Asia which is producing world quality whiskey.

The island of Taiwan.

Probably the oldest alcohol produced on the island of Taiwan is millet wine, which was made by the aboriginal peoples and was an element of many of their rituals and festivals. Eventually, they started producing rice wine though nowadays, it is used far more often in cooking than for drinking. Currently, Taiwan’s most famous spirit is Kaoliang, a clear alcohol made from fermented sorghum that commonly ranges from 76 to 120 proof.

Besides these wines and spirits, and because of the country’s hotter temperatures, beer is extremely popular, and many people enjoy drinking their beer over ice. At most bars, they serve beer in a bottle, and taps are uncommon. One of the most popular local beers is Taiwan Beer, an amber lager which is brewed with barley and fragrant penglai rice.

In the last twenty years or so, international spirits, including whiskey, from all around the world have begun to appear on store shelves in Taiwan. As such, whiskey gained some popularity there, and eventually led one local entrepreneur to construct his very own whiskey distillery, the first of its kind on the island.

At the beginning of the 20th century, there were over 2600 commercial producers of alcohol on Taiwan however, that all changed when the Japanese seized control of Taiwan after the First Sino-Japanese War. The Japanese established the Monopoly Bureau of the Taiwan Governor's Office, which became responsible for all liquor, tobacco, opium, salt and camphor products in the country. However, even when Japan was defeated in World War II, the government monopoly on alcohol remained in place, though it was soon after renamed the Taiwan Tobacco & Wine Monopoly Bureau.

Significant change would not arrive until January 1, 2002, when Taiwan officially became the 144th member of the World Trade Organization (WTO). The Monopoly Bureau was renamed as the Taiwan Tobacco and Liquor Corporation and new laws were enacted that permitted private companies to open distilleries and produce alcohol. This opening quickly led to a number of wineries and microbreweries opening up in recent years, and one whiskey distillery.

The Taiwanese have a healthy appetite for whiskey, and the market has been growing significantly in recent years. Taiwan is around the 5th or 6th largest export market for Scotch Whisky, though they are around only 20th place for whiskey consumption per capita.

The King Car Food Industrial Company, founded in 1956 by Tian Tsai Lee, has been involved in numerous businesses, including beverages, food, biotechnology and aquaculture.  It is known for such products as Green Time Natural Drinking Water and Mr. Brown Coffee. With the breaking of the government alcohol monopoly in 2002, the path was opened for the company to construct a distillery, and they were interested in producing whiskey, though many people were skeptical that the plan would work. However, they went forward with their plans anyways, assembling a research & development team to explore the possibility, traveling to Scotland to study their options.

Tian Tsai Lee was born in Yilan County, located in the northeastern region of Taiwan, and chose to build his distillery there, in the township of Yuanshan. As an homage to the aboriginal people of the Yilan, we decided to name his whiskey Kavalan. The term "Kavalan" roughly means the "people of the plains"and is also the name of the people who once inhabited this area. Yilan was partially chosen because it possesses excellent natural water sources, which flows down from the Central and Snow Mountain ranges. This is also the source of the Green Time Natural Drinking Water which King Car bottles. In addition, the Yilan is close to the Pacific Ocean, so the distillery benefits from that climate.

In 2005, construction of the distillery began and surprisingly, it was completed in only nine months, when it usually takes five years. The facility is quite substantial, and has even grown since its initial construction. Originally, it had the capability of producing 3 million bottles annually but that has now grown to about 9 million bottles. There are approximately 46,000 casks in storage. The distillery has a large visitor center and over one million people visit each year. In comparison, that is roughly the same amount of tourists to visit all of the whiskey distilleries in Scotland!

Dr Jim Swan, a Whiskey consultant, worked with the people of Kavalan, including Master Blender Ian Chang, to set up the distillery and overcome the potential problems and obstacles with producing whiskey in Taiwan. Ian Chang is also the whisky producer’s brand ambassador, director of global business development and head of R&D.

The primary problem is the hotter temperatures in Taiwan, which result in a more rapid maturation. For example, what might take 8-15 years of aging in Scotland only takes 3 years, or even less, in Taiwan. On average, Taiwan is about 27 degrees Fahrenheit warmer than Scotland. The higher temperatures also mean that the whiskey barrels lose much more to evaporation, the "angel's share," than they would elsewhere.  The angel's share might be 2% to 3% in Scotland, but in Taiwan it is more like 10% to 15%, a huge difference. In addition, these higher temperatures can lead to increased bacterial growth. As such Dr..Swan and Chang worked together to find ways to handle these issues.

For example, they use stainless steel fermenting containers, instead of wood, to prevent bacteria. By the way, their barley is imported from Europe. Much of their work is directed toward the maturation of the whiskey, including the creation of a five-story warehouse. The higher levels are hotter so larger barrels, 500-700 liters, are used on that floor while smaller barrels,18-250 liters, are used on the lower and cooler floors. Experimentation and research into other methods of slowing maturation are ongoing.

The first whiskey from Kavalan was produced in March 2006, and the first bottles began to be sold in December 2008, nearly six years ago. Initially, to cater to the taste of Taiwanese consumers, ther whiskies presented with a fruity flavor profile. All of their whiskies are also cask strength, non-chill filtered and natural in color. The squared-off design of the single malt bottle was inspired by the Taipei 101, one of the tallest building in the world. Kavalan now produces about ten different whiskies, with at least six available in the U.S.

The Kavalan whiskies have received a number of accolades and awards, and are being taken very seriously. They have proven that world class whiskey can be made in Taiwan, despite the hitter temperatures, which should be interesting news to other countries which have considered making their own whiskey. In time, maybe additional distilleries will open in Taiwan. Right now, the Taiwan Tobacco and Liquor Corporation bottles some other whiskies, under labels such as Yutai Golden Whisky and Jade Supremacy Taiwan Whisky, though that is actually distilled in Scotland. They merely blend the whiskey in Taiwan.

The distillery is part of a substantial site on the plains at Yi-Lan, with many acres of company-owned ground at its disposal for expansion. A steep range of heavily-wooded hills and mountains lie just behind the distillery and their lush, green slopes suggest that water shortages are unlikely to represent a future problem. The parent group is well-financed and, as a family-owned company, capable of taking the long-term decisions essential for success in the whisky business 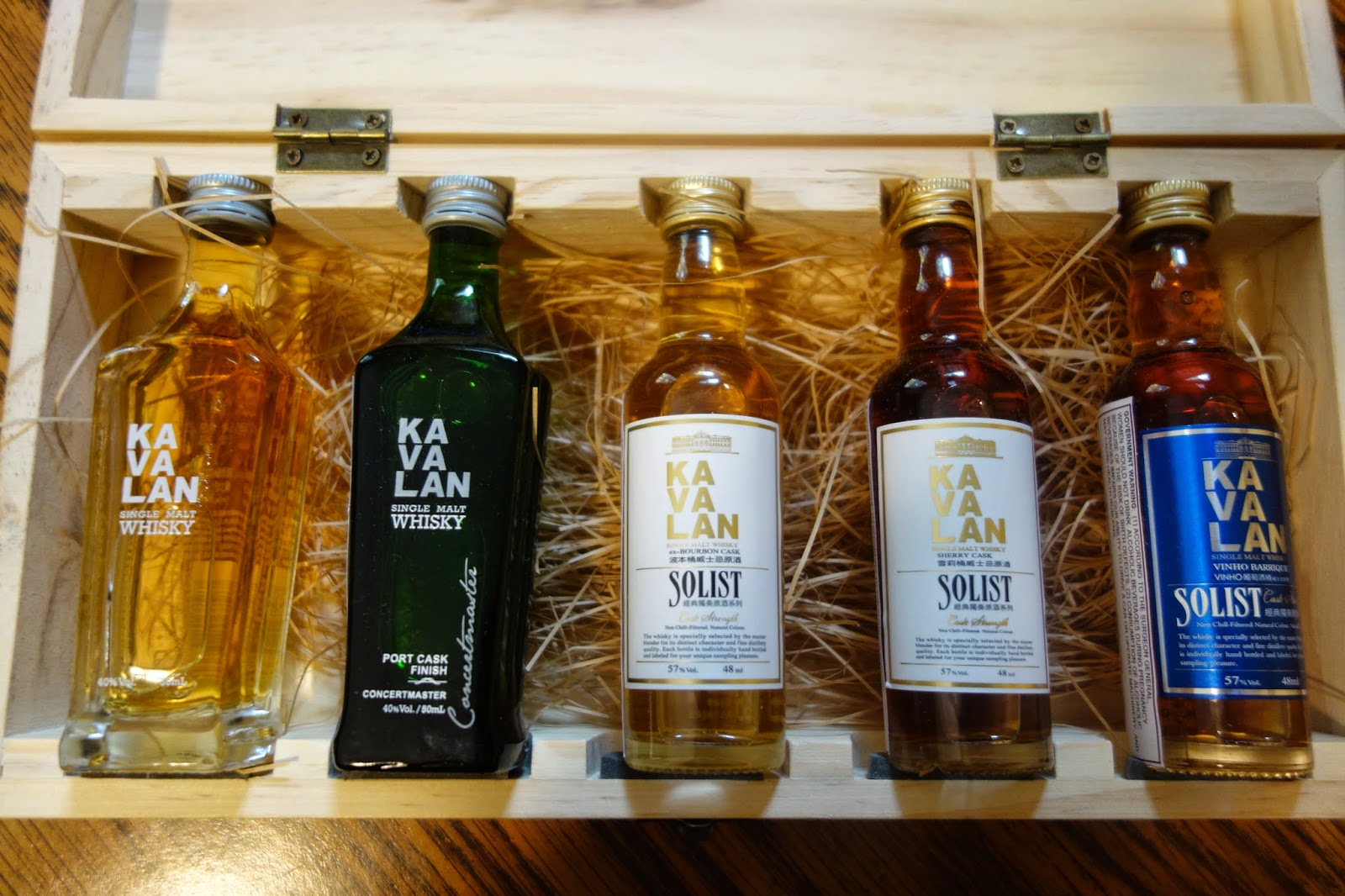 I received a media sample box containing five different whiskies produced by Kavalan, and I understand why Kavalan is receiving so many accolades. I tasted these whiskies both without and with the addition of a little water, and found that the water generally brought our more fruit flavors in the whiskies, especially in the Solist line. If you are a whiskey lover, you need to put these on your radar and see why so many are raving about Kavalan.

The Kavalan Single Malt Whisky ($89.99) was the first whisky produced by Kavalan, and has an ABV of 43%. With a light amber color, it has a fruity and floral nose, On the palate, it is silky, with a lush blend of flavors, including tropical fruit, honey, vanilla, orange peel and coconut, with chocolate notes on the lengthy finish. Clean and complex, this should appeal to most whiskey lovers.

The Kavalan Concertmaster Whisky ($99.99) is a single malt whiskey, that was finished in Port casks, and has an ABV of 43%. The Port casks include ruby, tawny and vintage port. With a slightly darker amber color, the nose is more chocolate and savory notes. However, on the palate, there is more fruit, including red berries, along with vanilla, chocolate, and a bit of leather. A little heavier in the mouth feel than the basic Single Malt. It was also silky and complex, clean and with a lengthy, satisfying finish.

The Kavalan Solist Ex-Bourbon Cask Whisky ($159.99) is a single malt whiskey aged in ex-bourbon casks, and has an ABV of 57% (bottled at cask strength). With a nice golden color, the nose reminded me of sweet bourbon, and similar flavors came out in the taste. A bit sweeter than the other whiskies, there was plenty of vanilla, coconut, and tropical fruit notes, with accents of honey and spices. Despite the higher alcohol, it was still easy drinking, and possessed a pleasing finish.

Maybe my favorite of the five was the Kavalan Solist Sherry Cask Whisky ($184.99). which is a single malt whiskey, aged in Oloroso sherry casks, and has an ABV of 57% (bottled at cask strength). With a dark brown color, the same as an aged Oloroso, is provides an intriguing nose of dried fruit, nuts and spice. On the palate, it will remind you, in part, of aged Oloroso, with vanilla, nutty notes, spices, caramel, honey and raisins. It is fairly silky, with lots of complexity, and a very lengthy finish that never seems to stop. This is a whiskey you'll want to slowly savor over the course of an evening, reveling in its complex profile. Highly recommended.

The Kavalan Solist Vinho Barrique Whisky ($159.99) is a single malt whiskey, aged in used American oak wine barrels that have been toasted and re-charred, and has an ABV of 57% (bottled at cask strength). It is a lighter color than the Sherry Cask, and the nose is a pleasing blend of fruit, dark spice and chocolate. On the palate, those same tastes blend harmoniously together with citrus, vanilla, caramel, and black pepper. An intriguing whiskey, it is a bit bigger and bolder than the others, offering an excellent drink for a winter evening.
Posted by Richard Auffrey at 3:00 AM