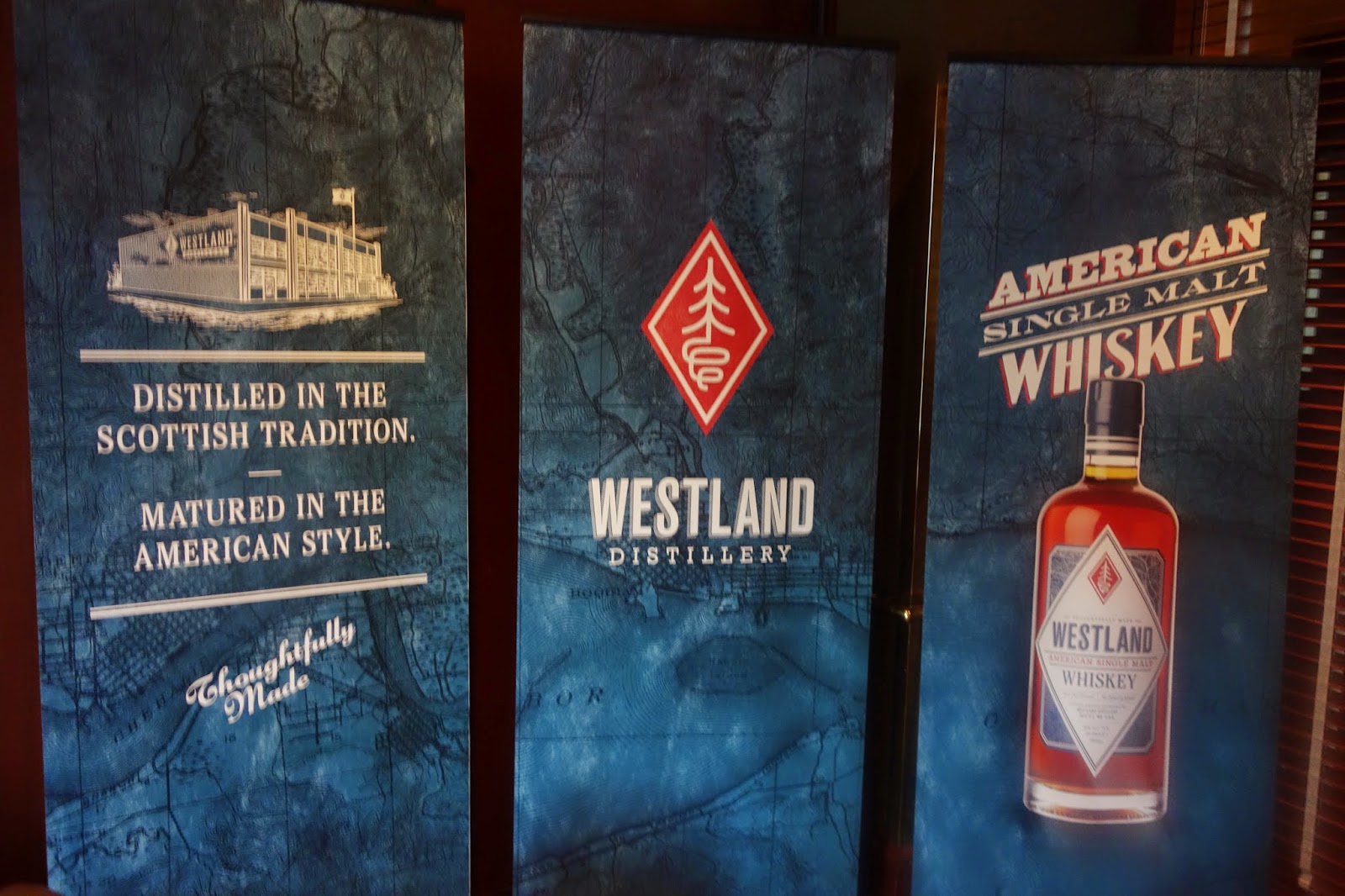 It's an exciting time for whiskey lovers as excellent whiskey is now being produced all over the world. Some of these new distilleries have been making their mark, impressing everyone with world-class whiskey that can compete with the best.

In 2008, the state of Washington passed a new law, creating a "craft distillery" license, allowing small distilleries to open tasting rooms and sell their product. Since that time, additional laws have passed, expanding the advantages granted to these craft distilleries. The production limit has been raised to 150,000 gallons per year and there are no limits as to how much they can sell from their tasting rooms. In addition, in 2012, a law was passed eliminating the state monopoly on liquor sales, and opening up thousands of new markets for craft spirits. All of these changes have led to a boom in distilleries so that there are now over 85 in the state, with about 30 more on the way.

One of these new distilleries, Westland Distillery, and located in Seattle, was established in 2010 by two high school friends, Matt Hofmann and Emerson Lamb,  I think Westland is standing out as distinctive and unique, and their future looks bright. Before they opened their distillery, and rather than just jump into the distilling game, they toured the world, visiting around 130 distilleries. It was an educational journey and they leaned much about whiskey production. Their lofty objective is to put Washington on the map for single malt whiskey, and I think they might just accomplish their goal.

Recently, I attended a Westland Distillery dinner event, hosted by Anchor Distilling Company, at Grill 23 & Bar, and had the chance to meet and converse with Emerson Lamb. It was a fascinating evening, and Emerson is very serious about whiskey. As we talked, I found reflections of Scotland, Japan and Spain, in all that he said. And when I got to taste his whiskies, a single malt and a peated version, I was thoroughly impressed. These are whiskies that you are going to hear more and more about, and I'm intrigued about the future products they will be creating.

This size difference is significant, allowing them far more choices for blending. For example, they typically use whiskey from 50 different barrels to make their Single Malt. He feels that a distillery needs at least 1000 barrels to be able to properly blend whiskey. The smaller craft distilleries have far less options available to them, making it much harder to make a consistent product. The greater amount of barrels does give an advantage to Westland for blending, allowing them an opportunity for greater complexity and depth to their whiskey.

An interesting element of Washington's craft distillery law is the requirement that distilleries must use at least 50% ingredients which are sourced from Washington. So why does Emerson believe Washington is a good place to create whiskey?  He has three major reasons why it is an excellent environment for such.

First, the state is home to two great barley growing areas, much organic, and Westland doesn't use any GMO barley. Malted barley isn't really cheap either, typically selling for 50-60 cents a pound, while you could find corn for under 10 cents a pound. Second, Washington has excellent water and Westland's source is the Cedar River Watershed, one of the last sources in any major U.S. city of unfiltered water. Third, the climate in Washington is fairly steady year round, unlike the big diurnal swings that occur in Kentucky, and that consistency allows their whiskey to retain its balance.

During my conversation with Emerson, comparisons to Japan arose frequently. For example, a Junmai Sake is made from only four ingredients, yet those four are still able to create a great diversity of aromas and flavors. And it is the skill of the brewers which transforms those basic ingredients into the wonder of Sake. Westland Single Malt Whiskey is also made from only 4 ingredients, three similar to Sake. They include a grain (barley rather than rice), water, and yeast. Their Single Malt uses a grain bill of five different roasted and kilned malts.

The main difference with the whiskey is that their fourth ingredient is oak, most of which is currently new U.S. oak. However, they are currently experimenting with maturation in various Sherry barrels, from Fino to Pedro Ximinez, and not just as a finishing element. Their yeast, nicknamed Jean-Claude Van Damme, is a French-Belgian yeast that was isolated for flavor and its strong fermentation ability. In addition, it provides a fruity aspect to their whiskey.

And like Sake, it is the distillation process which transforms those four simple ingredients into the wonders of whiskey. Ermerson likes to use the Japanese term Jizake to describe their aim, to create a house style for their whiskey. Jizake, which roughly translates as "local or regional Sake," usually refers to small, artisan breweries which possess their own style. Westland describes their house style as "a sweetness and ease on the palate accompanied by a fruity and complex but ultimately grain-focused finish."

In addition, in Japan blending is considered an art form, as it also is in Champagne, Emerson is a big advocate that blending of whiskey is also an art, and they seek consistency in their products, with the ability of using many barrels to create their own blends, far more than the average craft distillery can use. I definitely agree that blending is a specialized skill and art, especially when you are mixing so many different whiskies together. As I mentioned before, it usually takes a blend of 50 barrels to make their Single Malt and it takes about 25 for their Peated. It should also be noted that they have a large single cask program as well.

Though other whiskey distilleries won't reveal certain secrets about their production methods, such as the nature of the grain bill, Westland has no secrets. They publish a small booklet about the distillery which contains 2 pages of detailed Distillery Specifications, including Mashing, Fermentation and Distilling. They don't see any reason to hide anything and want to be fully transparent.

What is the taste of Westland Whiskey? Emerson stated that "good is not a tasting note." He wants consumers to have a better vocabulary to explain what they taste in whiskey, and to that end they have an extensive Tasting Wheel, which is also in their small booklet. For Emerson, he wants to "find the emotional button," to connect with consumers through the whiskey. In addition, he feels people can drink whiskey any way they want, whether neat or in a cocktail, and also notes that a little addition of water to their Single Malt will bring our the fruit flavors more. 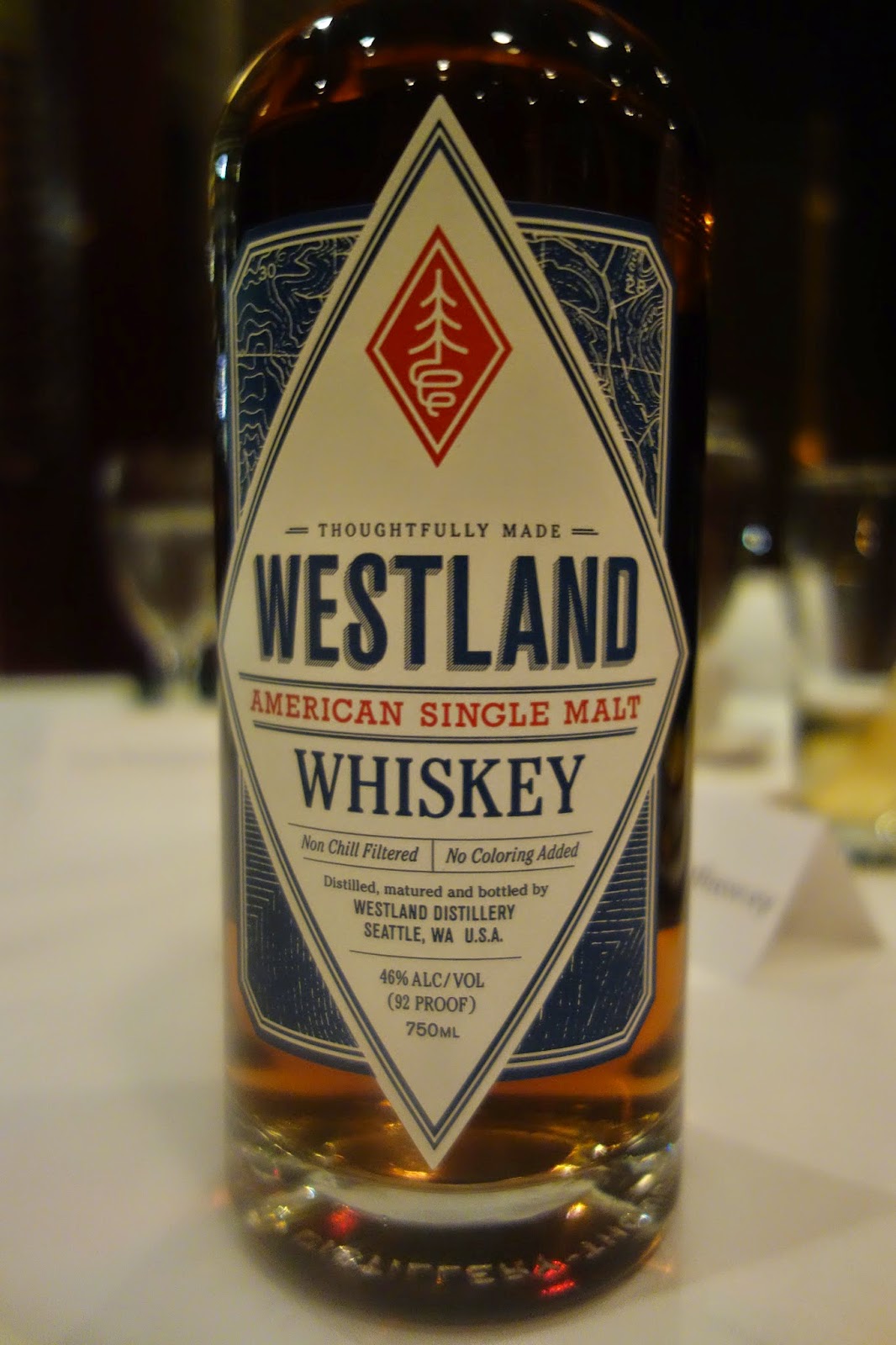 On the label of their products, you will see a diamond-shaped symbol at the top, which is the symbol of their company. The diamond has long been the Lamb family symbol, and Ermerson's family was also involved in lumber for many years, and thus the tree inside the diamond. The coil refers to the distilling equipment. Their two main products, a Single Malt and the Peated, both will sell in the local area for around $78.99, though the Peated is not yet available but will be in the near future.

The Westland American Single Malt Whiskey reminded me if one those alcohol-filled chocolates you find at a high-end chocolatier. Emerson mentioned that chocolates notes help to define the taste of Westland, and I found those chocolate flavors to pervade the taste of this whiskey. It was a balanced taste though, which complemented the other flavors of the whiskey rather than overpowering them. I added a little water to the whiskey, and it seemed to bring out fruity flavors of citrus and cherries, which were part of a melange including vanilla, caramel and coconut. There was a silky texture to the whiskey and a pleasant heat, perfect for a chill autumn day. An impressive whiskey, with plenty of complexity and a nice depth of flavor. Highly recommended. 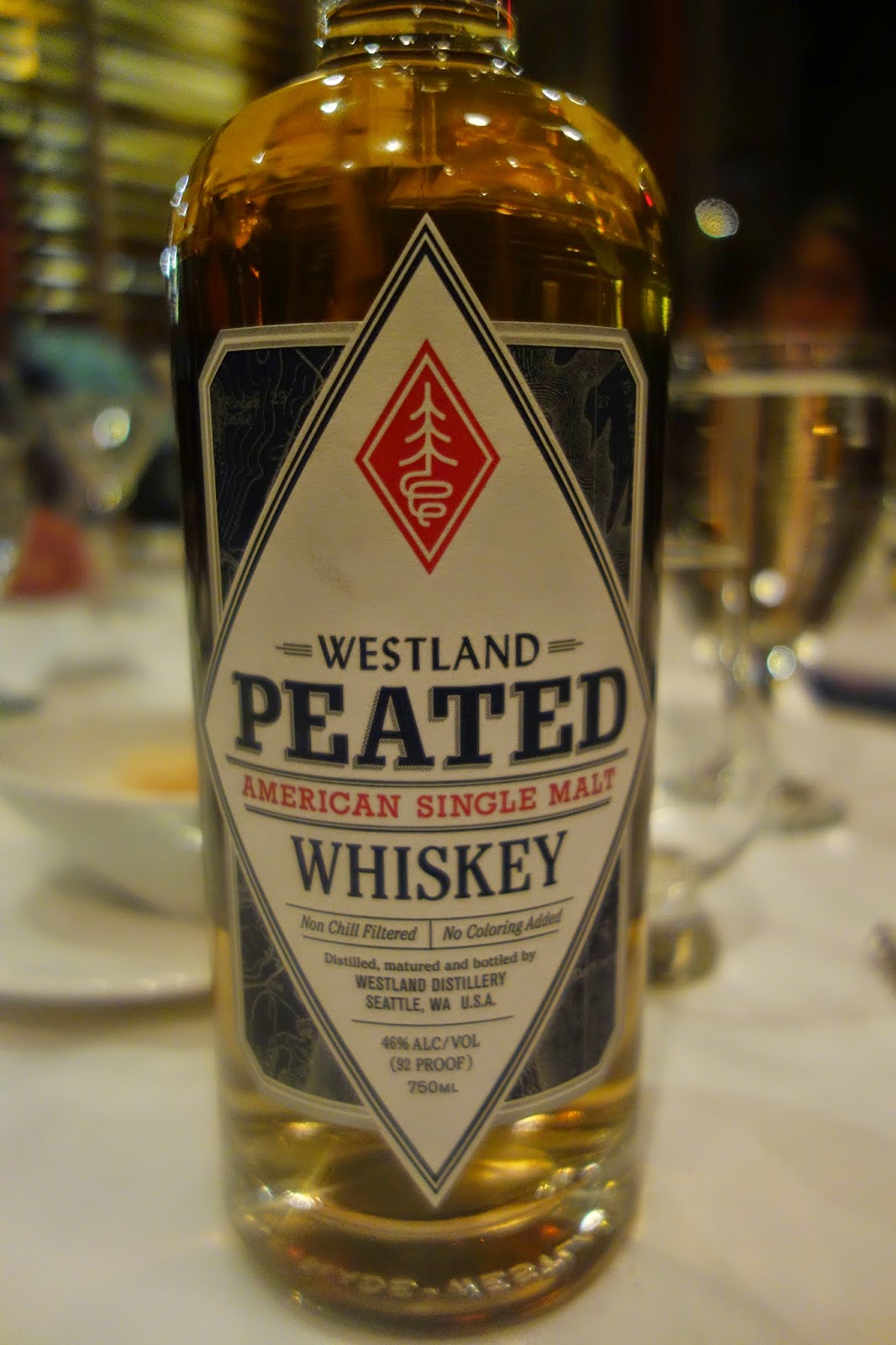 Of the two whiskies, my personal preference was the Westland Peated Whiskey. It uses imported peated barley from Scotland, which they combine with 50% Washington barley. They mature the whiskey in 80% used Bourbon casks and 20% Oloroso and Pedro Ximenez Sherry barrels. As an aside, they recently purchased a peat bog, about 60 acres, in Washington, the only one that can be legally harvested in the state. They won't sell any of their peat and considering their proposed future use, the peat should last for about 10,000 years.

This Peated Whiskey reminded me of barbecued dirt, a smoky and earthy mix which I found especially compelling. Once again, the flavors were well balanced, and the smokiness didn't overpower the whiskey. And like the Single Malt, this whiskey was silky smooth and delicious, with a complex blend of intriguing flavors, including vanilla, caramel, salted nuts, and subtle red fruit flavors. There were hints of chocolate, coffee and citrus, but to a much lesser degree than the Single Malt. The aroma alone in this whiskey delighted me, and it was tempting to simply smell it and not even drink it, though I would love savoring a bottle with friends over a long fall afternoon. Highly recommended and one of the best spirits I have tasted this year.

Westland Whiskey is now available in Massachusetts and it can be found at a number of liquor shops and restaurants. This is a whiskey you need to seek out, whether for a cocktail or to drink neat. The future for Westland looks bright, and I am excited to see what future products they create.

Have you tasted Westland Whiskey, and if so, what are your thoughts?
Posted by Richard Auffrey at 3:00 AM