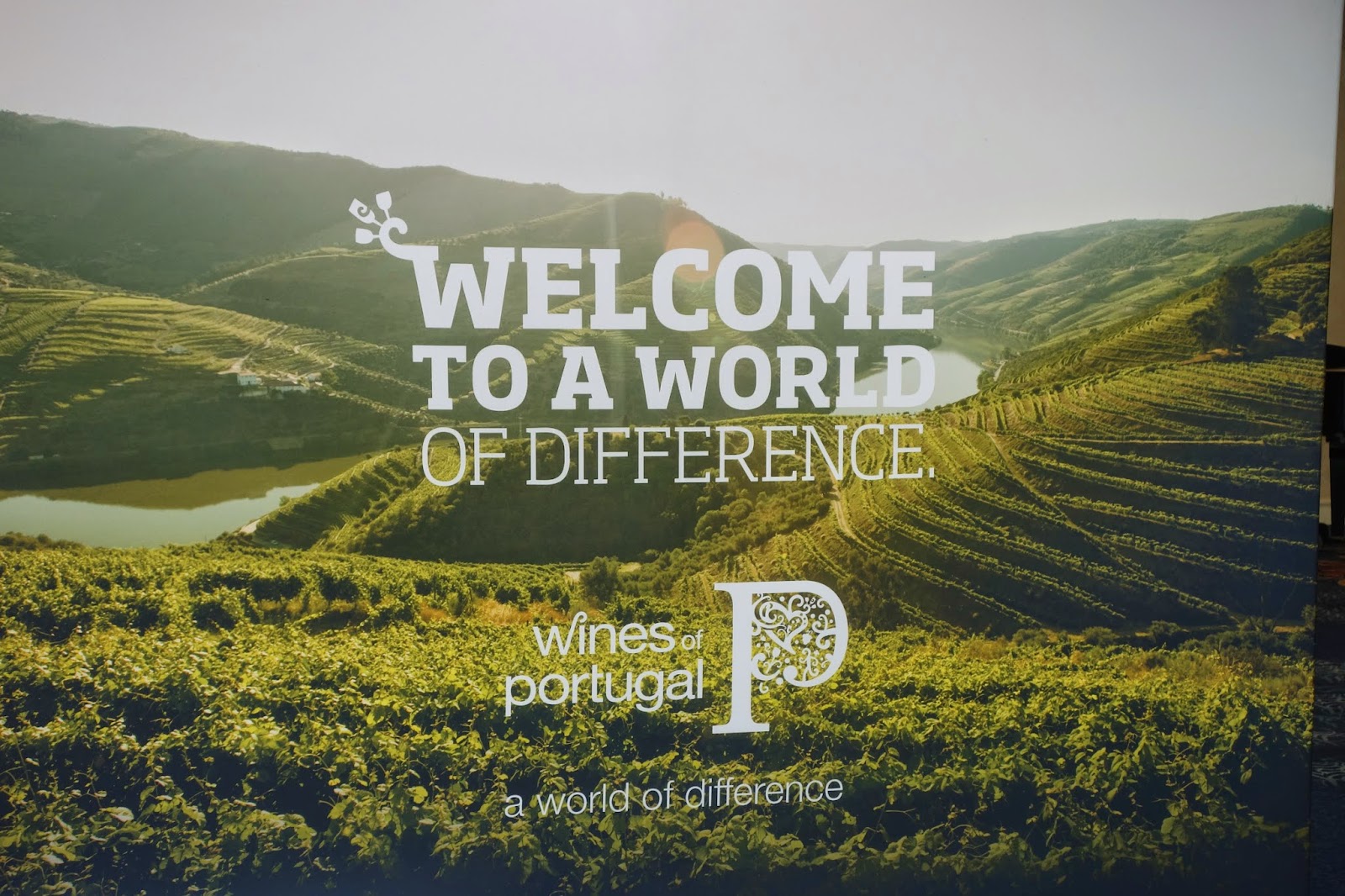 "The Gentleman did like a drop too much,
(Tho’ there are many such)
And took more Port than was exactly portable."
--Thomas Hood

As I've repeatedly said, I've heard the clarion call for the wines of Portugal, those intriguing wines which seduce with their tantalizing aromas and flavors. It is my desire that many others hear the summons of that clarion call too. To that end, I've become an ardent advocate for Portuguese wines, to share all the value, diversity and quality I have found in their wines.

During the first six months of 2014, exports of Portuguese wine to the U.S. have grown by 19.1%, up to 6.51 million liters, and Portugal is currently the 7th largest exporter to the U.S. As of October 1, 2014, export sales (excluding Port) increased to $19.5 million. This is all very good news but there is still plenty of room for continued growth. More people still need to understand the wonders of Portuguese wine, to sample the delights of their 250 indigenous grapes. 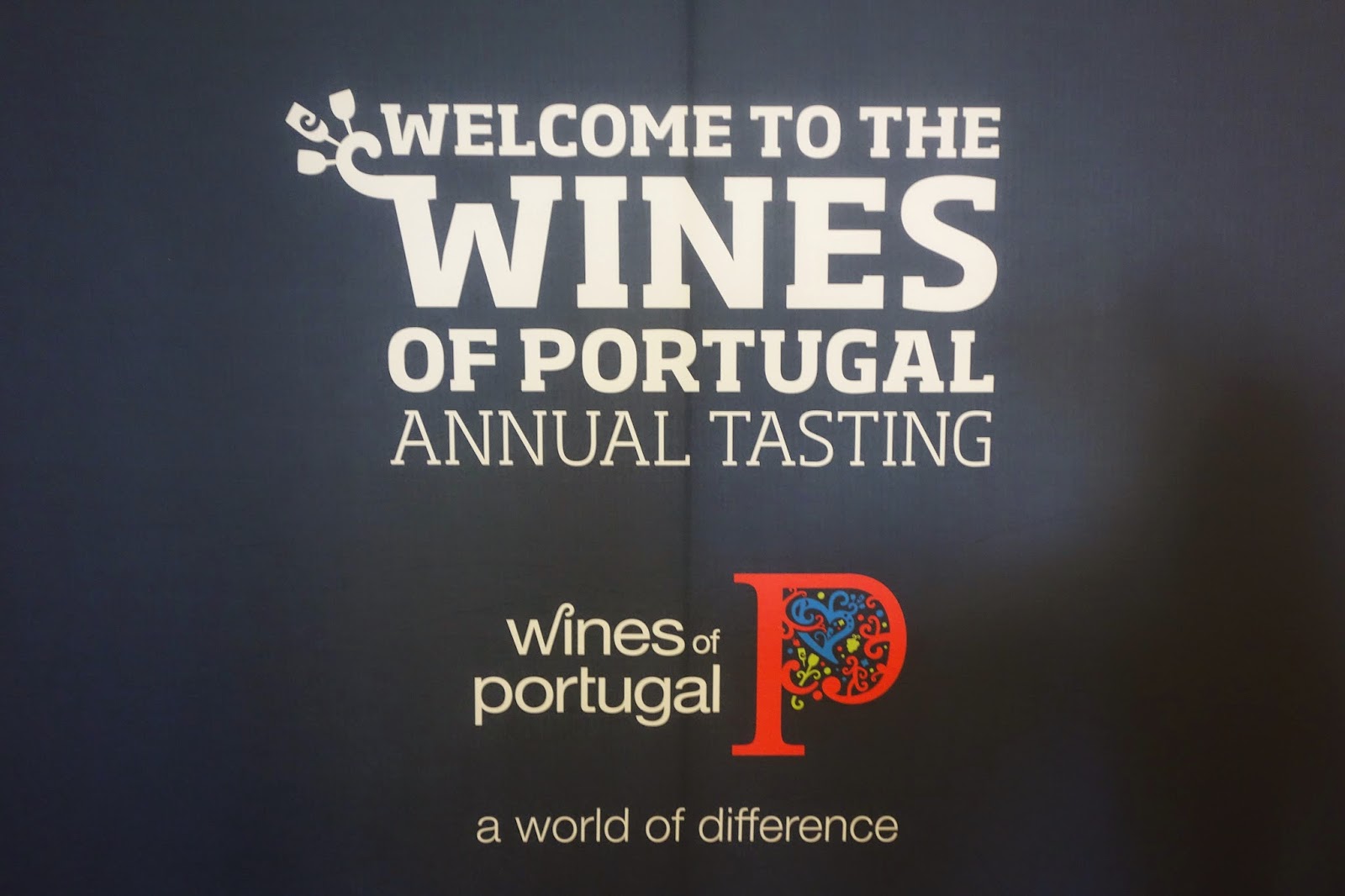 "I am only kept alive by frequent installments of mulled port wine."
--Thomas Hood

Part of the reason for the growth of Portuguese wines in the last two years has been a major promotional campaign in the U.S. by the Wines of Portugal.  “Wines of Portugal are extremely pleased with the consistent growth of the Portuguese wine category in the United States since the launch,” said Nuno Vale. “Based on the positive feedback received from trade and press over the past year, we are confident that consumers will want to further explore the incredible diversity of Portugal’s many premium offerings as awareness grows.”

Last week, the Wines of Portugal held a Grand Tasting of Portuguese wines for the trade, media and general public. They also held a seminar on the "50 Great Portuguese Wines," selected by Joshua Greene. To create this list, Joshua tasted about 600 Portuguese wines, and sought to choose wines which were accessible in the U.S., as well as to ensure diversity of the different wine regions. Master Sommelier Keith Goldston presided over the seminar, leading a blind tasting of eight wines, discussing indigenous grapes and talking about their wine industry.

Some of the interesting tidbits from his talk included:
At the Grand Tasting, there were over 30 wineries represented, and probably close to 200 wines available for tasting, including Sparkling, White, Rosé, Red and Ports. I found some old favorites there, like the 2010 Quinta dos Murças Reserva Red. There was plenty new to me as well, and much that was delicious and a good value. I've chosen to highlight three wineries from that tasting, two which produce Port, as they stood out the most to me at this event. However, there were plenty of worthy wines there, and there just wasn't enough time to carefully explore all of them. 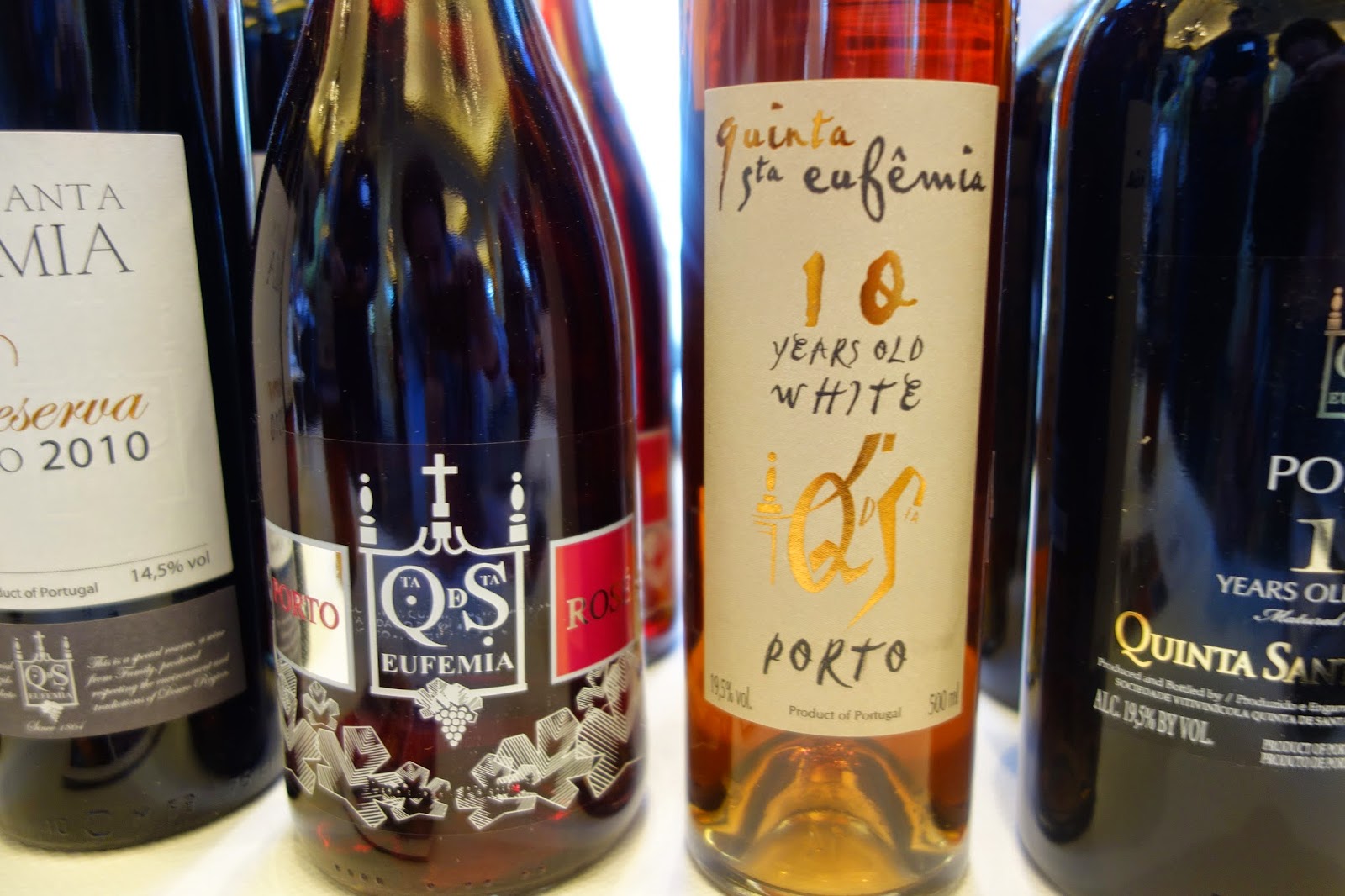 The Quinta de Santa Eufemia was founded in 1864 by Bernardo Rodrigues de Carvalho and it is now managed by the 4th generation. Located on the left side of the Douro River, the vineyards occupy more than 45 hectares. They produce both table wines and Ports.

As for table wines, the 2012 Douro Colheita, which is unoaked, presents pleasant red fruit flavors with a spicy backbone and a hint of the exotic. Easy drinking and satisfying. Their 2010 Douro Reserva Red, which sees some barrel aging, presented with more black cherry and plum flavors, stronger tannins, a spicy accent and hints of leather. Bring on the beef, or another hearty dish, with this wine, 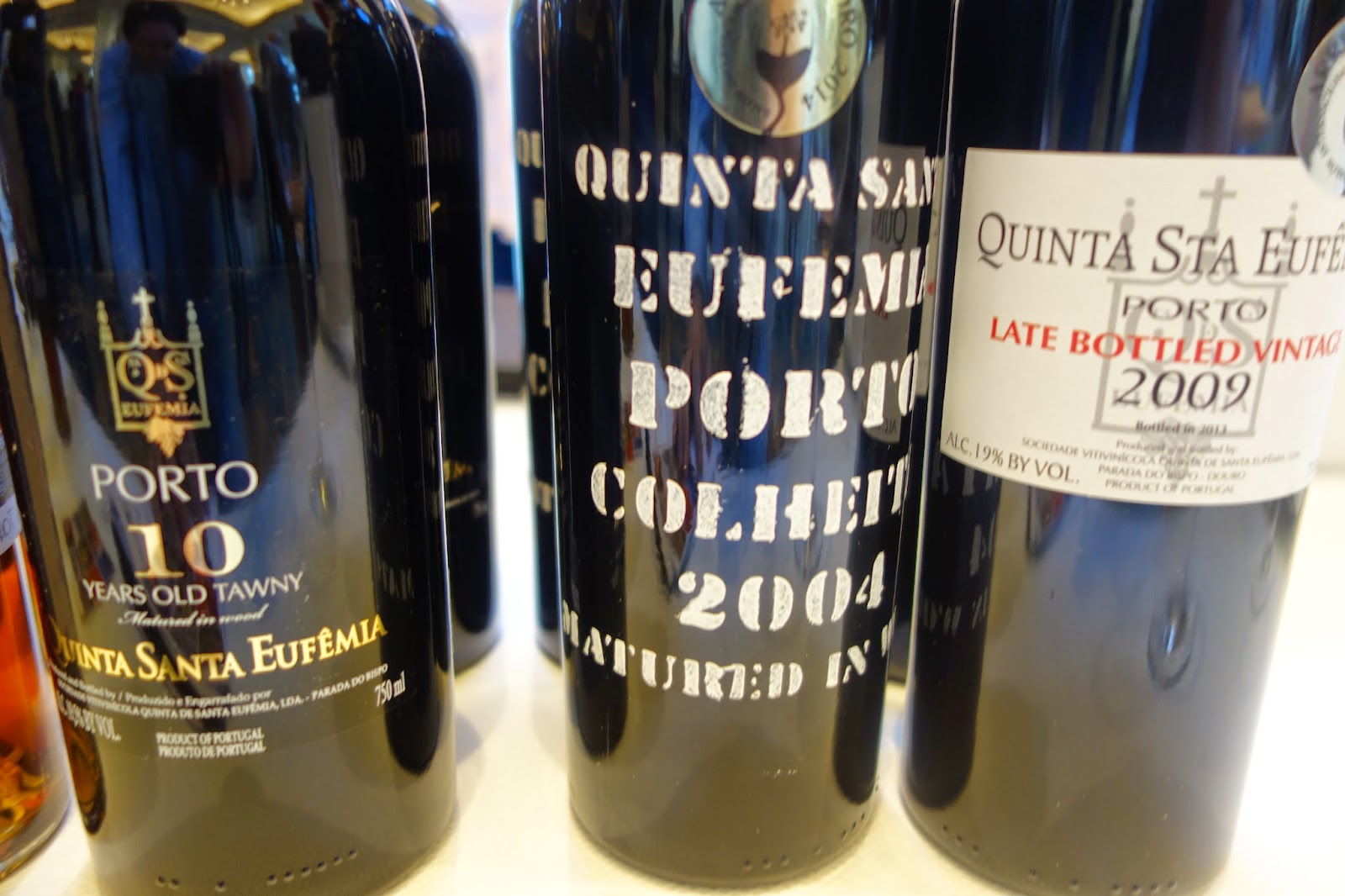 Their Ports were generally elegant and well balanced, presenting complex and delicious flavors. Their 2013 Rosé Port had delicious, bright red fruit flavors and a tinge of sweetness. I enjoyed both the 2009 Late-Bottled Vintage and the 2004 Colheita, seeing the progression in quality and complexity with the age. And the 10 Year Old Tawmy was one of the best in this class I have tasted in some time. The fortification was well integrated into the Port, and it possessed a more subtle sweetness, enhancing the complex melange of delectable flavors.

However, the most striking Port at their table was from a relatively new category, Aged White Port. Most White Port is consumed young, and may be drank mixed with tonic water and ice. However, some wineries are now producing Ports that have been aged 10, 20 and even 30 years. I tasted their 10 Year Old White Port (and they also make a 20 & 30 year old), which is a blend of Malvasia Fina, Gouveio, Moscatel Galego, and Rabigato. With a beautiful amber color, it possessed an alluring nose of floral and herbal notes, and on the palate the taste was complex and intriguing, a bit of an oxidative style. It had a tough of honeyed sweetness though it finished dry, and that finish lingers long in your mouth. It is surely a Port to slowly savor, enjoying the multitude of flavors that pass over your palate. I definitely need to explore more Aged White Port. 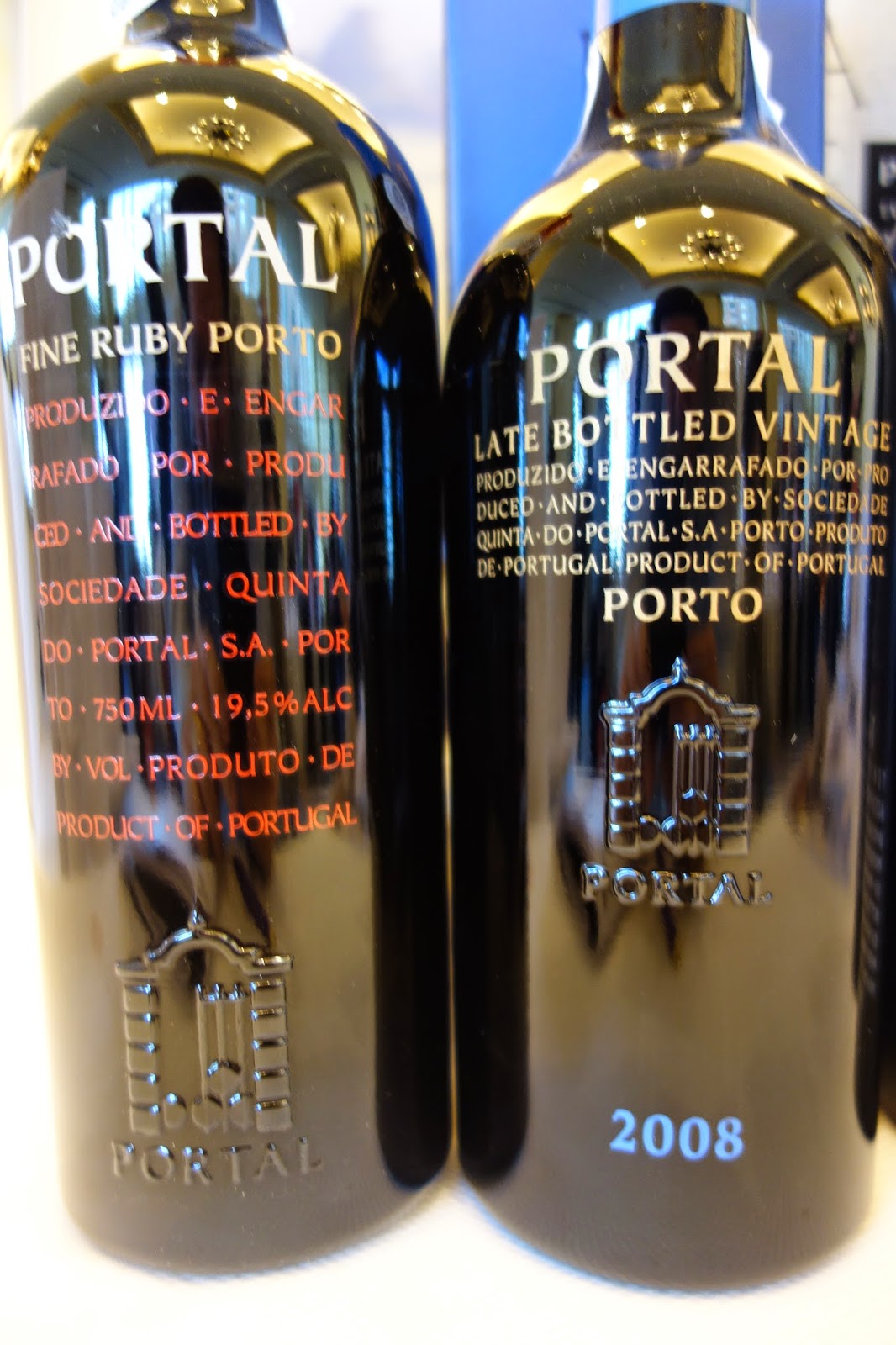 The Quinta do Portal is a bit of an oddity in the Port world, as it is one of the few Port Houses that is actually owned by a Portuguese family. Started by Eugenio Branco and his sons, Joao and Pedro Mansilha, they started amassing their Port stock in 1974. All of their vineyards are in the Pinhao Valley, and until 1994, they only made Port. On the front of their Port bottles is an open doorway, signifying that you are being welcomed in, and the back of the bottle is a closed doorway, stopping you from leaving. They want you to stay and enjoy their Ports.

The Fine Ruby Porto is an easy drinking Port with plenty of bright red fruit flavors. Smooth in the mouth, it has a sweet, fruity taste and a moderately long finish. Very pleasant. The 2008 Late-Bottled Vintage provides more depth of flavor, though still with delicious red fruit flavors and some spicy accents. Both are still young Ports, well balanced and tasty. 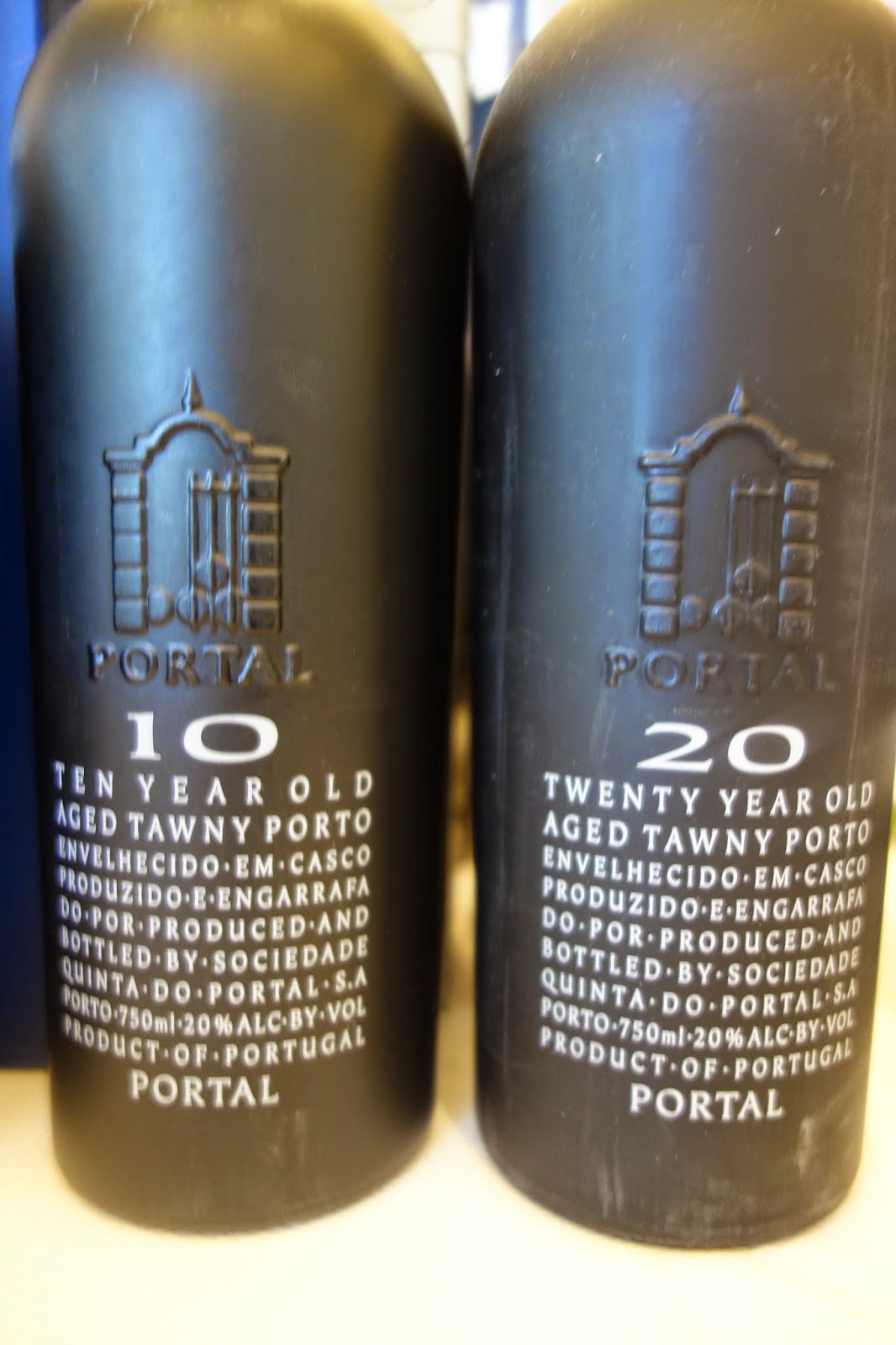 Their aged Ports show the fine quality of this winery. The 10 Year Old Tawny Port is nicely balanced, and the fortification is well integrated. There are plenty of tasty fruit flavors, both red and black fruits, though there are also notes of caramel and nuts in the background. There is ample complexity on the palate and it is an impressive Port. One of my top favorites of the Grand Tasting though was their 20 Year Old Tawny. With a light amber color, it was pure bliss. An alluring and complex aroma married to an intriguing melange of flavors. It was silky smooth with a lengthy and very satisfying finish.It's difficult to describe this Port in words as it is something that needs to be experienced. Highly recommended! 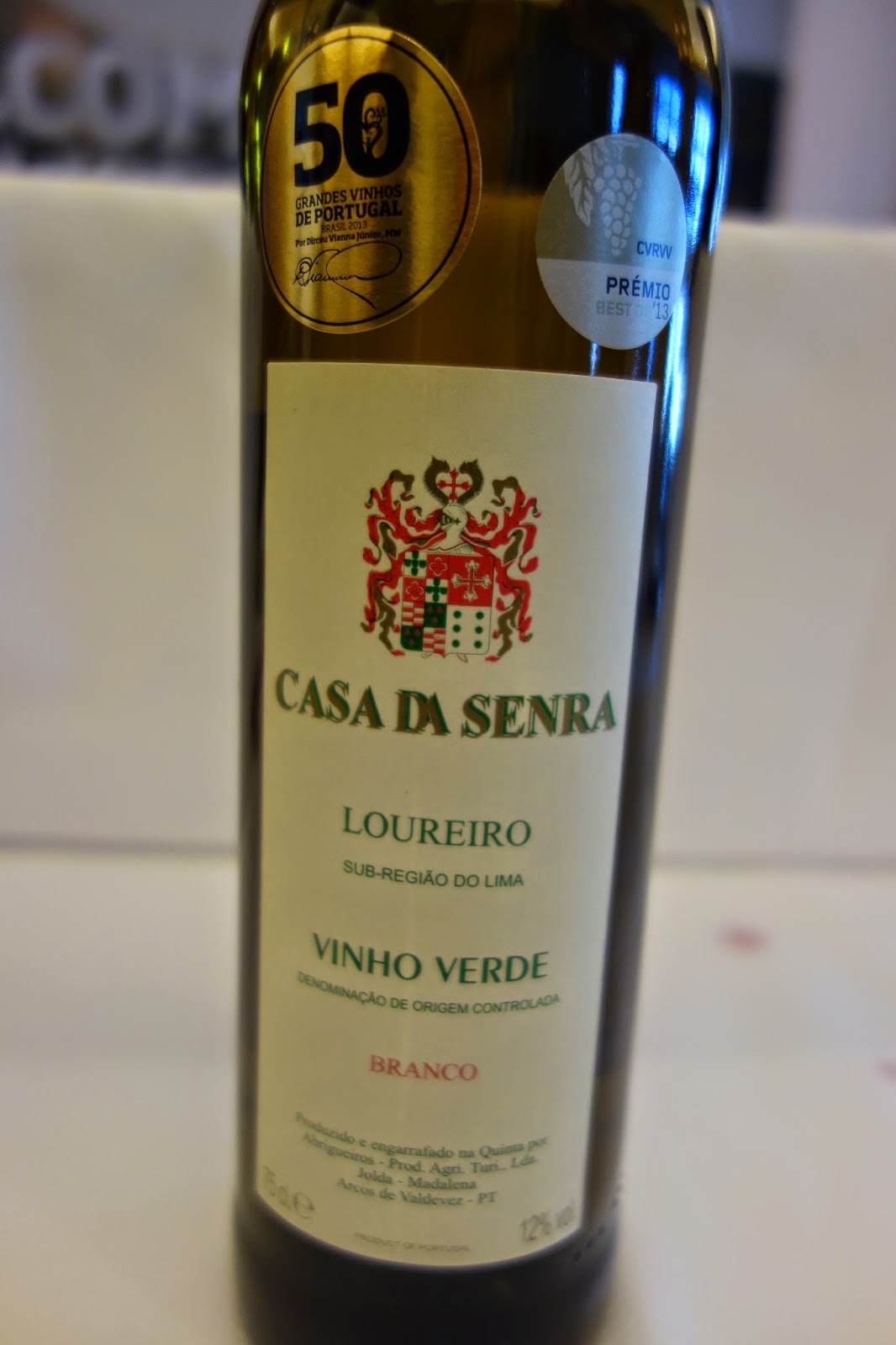 The Quinta do Abrigueiros has been in existence since the 17th century and now the 10th generation is operating the winery. It is located in the valley of the Lima River, in the northern part of Portugal, between the villages of Ponte de Lima and Arcos de Valdevez. They produce the Casa Da Senra brand.

Not yet available in the market, but hopefully soon that will change, the 2013 Casa da Senra Loureiro Vinho Verde was a stellar wine, especially as it should only cost about $10! With a bright golden color, this wine was dry and crisp, with a complex blend of citrus, tropical fruit and herbal notes. A slight effervescence made it even more refreshing, and it had a long,pleasing finish. It possessed lots of character for a wine at this low price point, making it one of the most compelling Vinho Verde wines I've tasted in some time. Highly recommended.

"And being fond of Port, he made
A port-hole of his mouth!"
--Thomas Hood
Posted by Richard Auffrey at 3:30 AM

This venue had everything a girl might need. I highly recommend getting ready in the bridal suite. They lit the fireplaces and the views of Boston restaurants from the suite were exceptional.