Alpamayo: Peru in the Berkshires 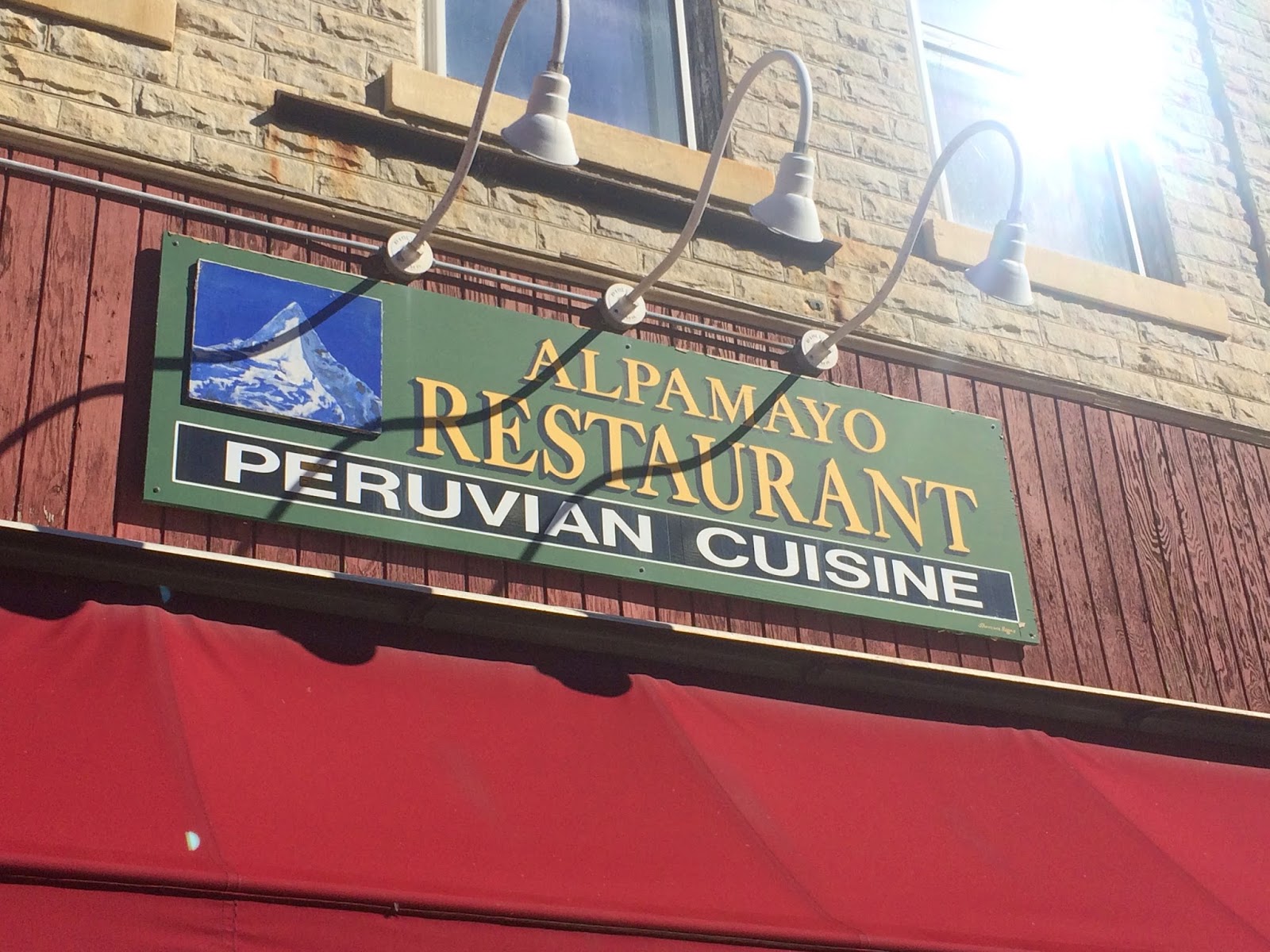 While driving home from the Hudson Valley, we were on the Mass Pike in the Berkshires and decided to stop and grab lunch somewhere. I didn't have a specific destination in mind, and didn't know the area well. From a quick check on the map on my iPhone, it seemed there were a number of restaurants in Lee, so we pulled off the Pike and drove down Route 20 into Lee.

We parked om Main Street and checked out the options, and what most intrigued me was Alpamayo Restaurant, a Peruvian spot, so we decided to give it a chance. Just as we sat down, I received a message from Marc of Boston's Hidden Restaurants, and he provided me two recommendations for local restaurants, and one happened to be Alpamayo. I felt even better about my choice.

Alpamayo, which means "earth river," is the name of a mountain in the Peruvian Andes. The restaurant serve lunch and dinner, and they state that they make everything from scratch. Always good to hear. They serve "authentic Peruvian cuisine" that is "based on family recipes handed down through generations." Most of my prior experience with Peruvian cuisine has been from Chef Jose Duarte, the owner of Taranta, a Peruvian/Italian restaurant in the North End. Alpamayo is a small and homey restaurant, with a full bar, and wasn't too busy when we were there, though became busier as our meal progressed.

I started with a glass of Chicha Morada ($3), an ancient Peruvian drink made from purple corn, fruit and spices. In some respects, it was like a cold mulled wine, without the alcohol, full of fall spices but with some citrus flavors. It was mildly sweet and had an interesting taste, a good choice for an autumn drink. 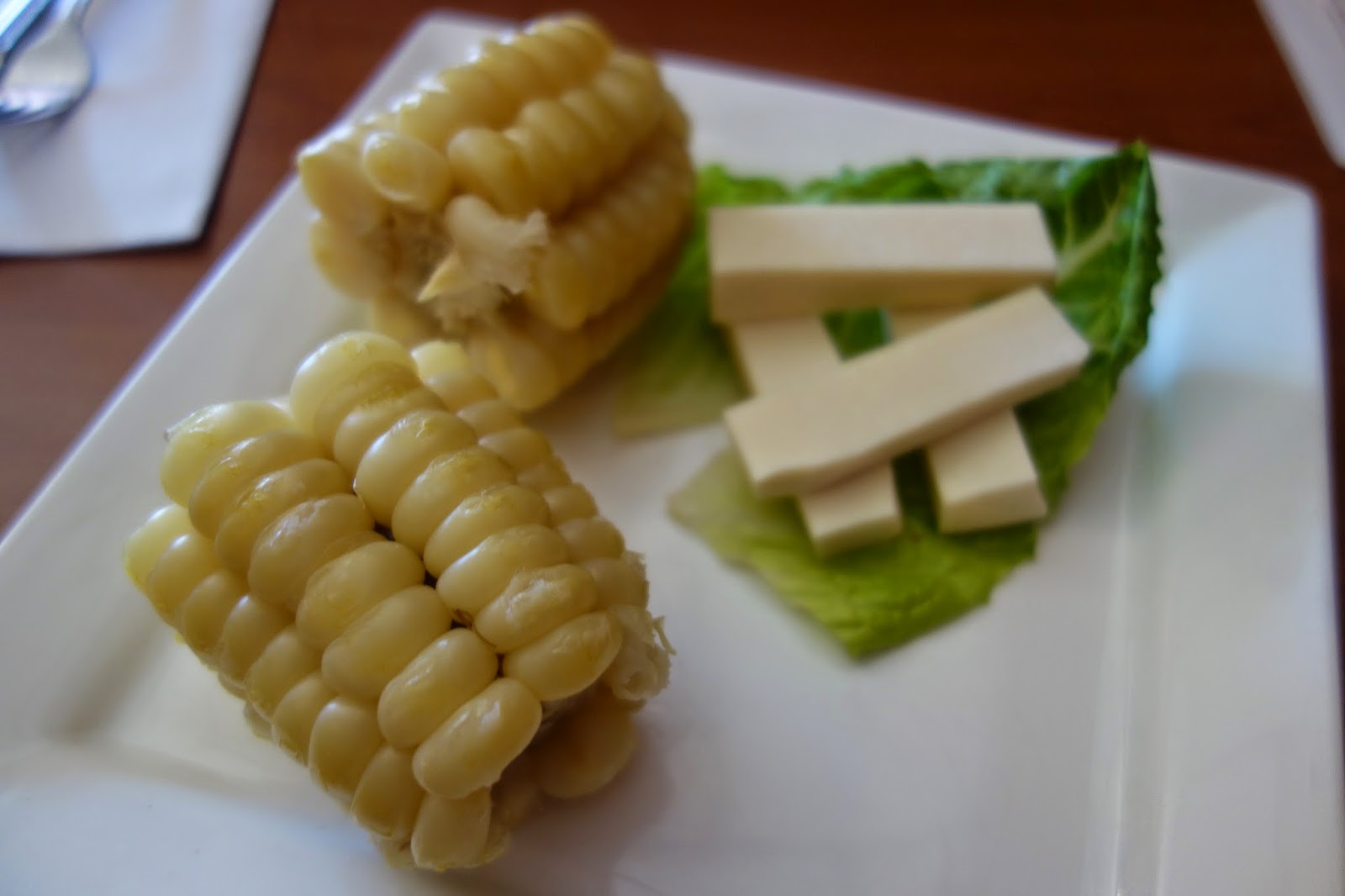 As an appetizer, we selected the Choclo con Queso ($6.99), Peruvian corn on a cob served with fresh cheese on the side. This corn had maybe the largest kernels that I have ever found on a corn cob. They were more savory than sweet, with a slight nutty taste, Traditionally, the corn is paired with queso fresco, and the cheese added a salty element to the dish. 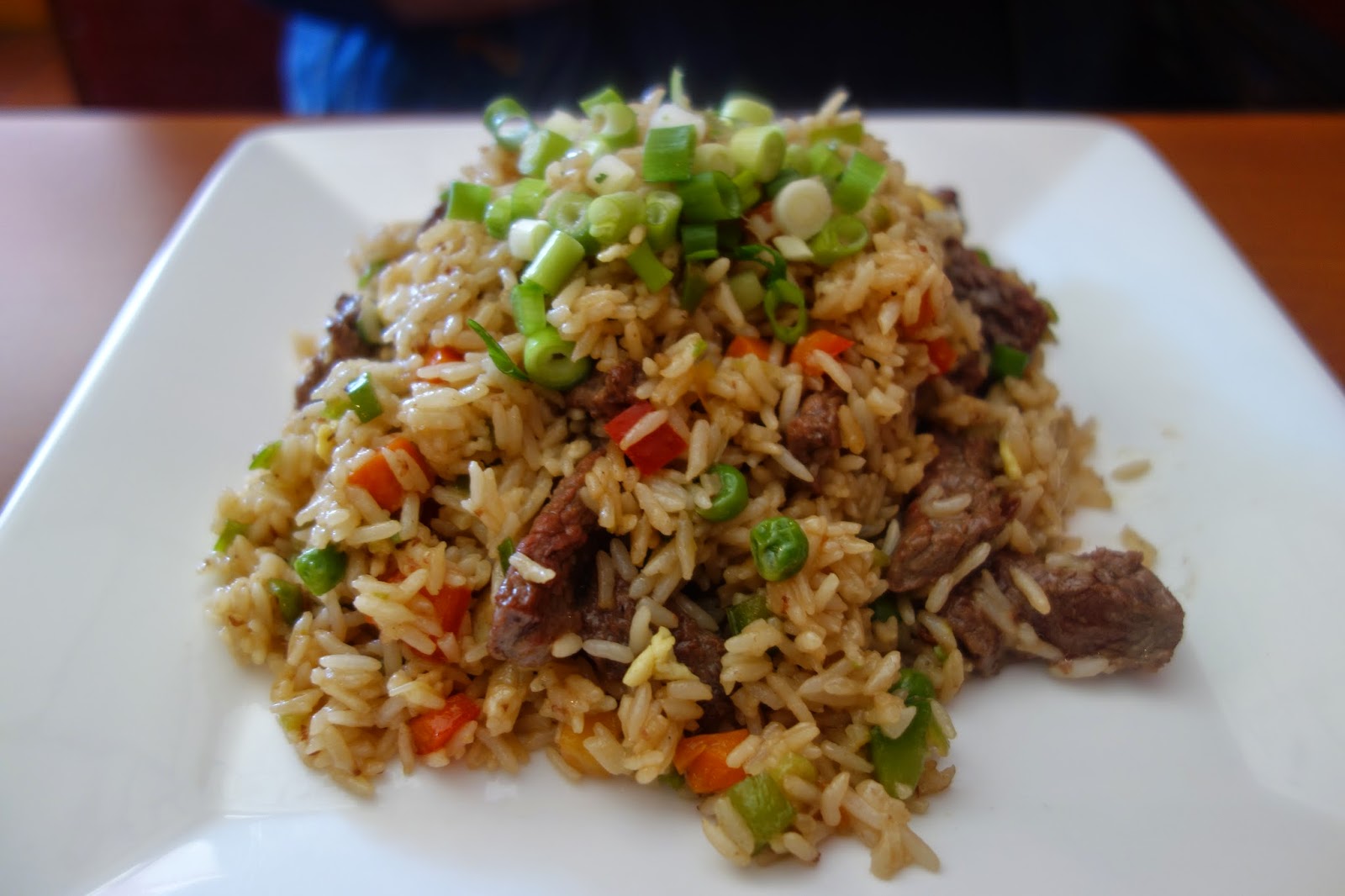 For entrees, one of our choices was the Arroz Chaufa ($13.99), Peruvian fried rice mixed with scallions, veggies, eggs & soy sauce. Arroz Chaufa actually means "Chinese rice," and was inspired by the numerous Chinese immigrants which came to Peru. It is served with either chicken or beef, and we opted for the beef. The dish tasted fresh, the beef was tender, and the rice was flavorful, with a nice blend of spices. We were happy with this dish. 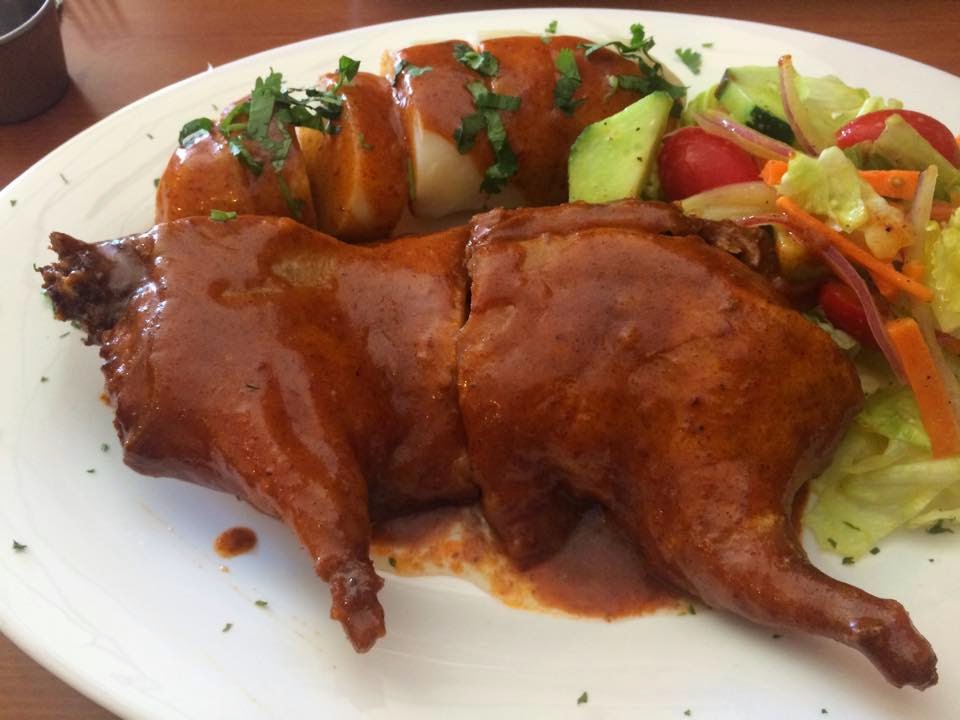 Once I saw it listed on the menu, I knew that I had to try it, though the menu mentioned that it was not always available. Fortunately, it was in stock so I chose the Cuy, with potatoes and salad. What is Cuy? It's Guinea Pig, and has been eaten in Peru and other South American countries for thousands of years. For the Incas, it was their primary source of meat, and in modern Peru, they still eat around 65 million guinea pigs each year. Guinea pig is high in protein as well as low in fat and cholesterol. Don't think of it as a household pet bur rather consider it as an intriguing different type of meat.

Covered with a spicy red sauce, the guinea pig had a fatty skin but very tender meat beneath it, most surrounding the bones. There was white and dark meat, and it resembled chicken in texture and its mild flavor. Eating the meat off the leg was like gnawing on a chicken drumstick. If you didn't know what it was, most everyone would enjoy the dish, but many people probably couldn't get past knowing it was guinea pig. The sauce added a nice spicy kick to the dish, and the potatoes, covered by the sauce, were tender and tasty. I enjoyed my guinea pig and it earns my hearty recommendation. 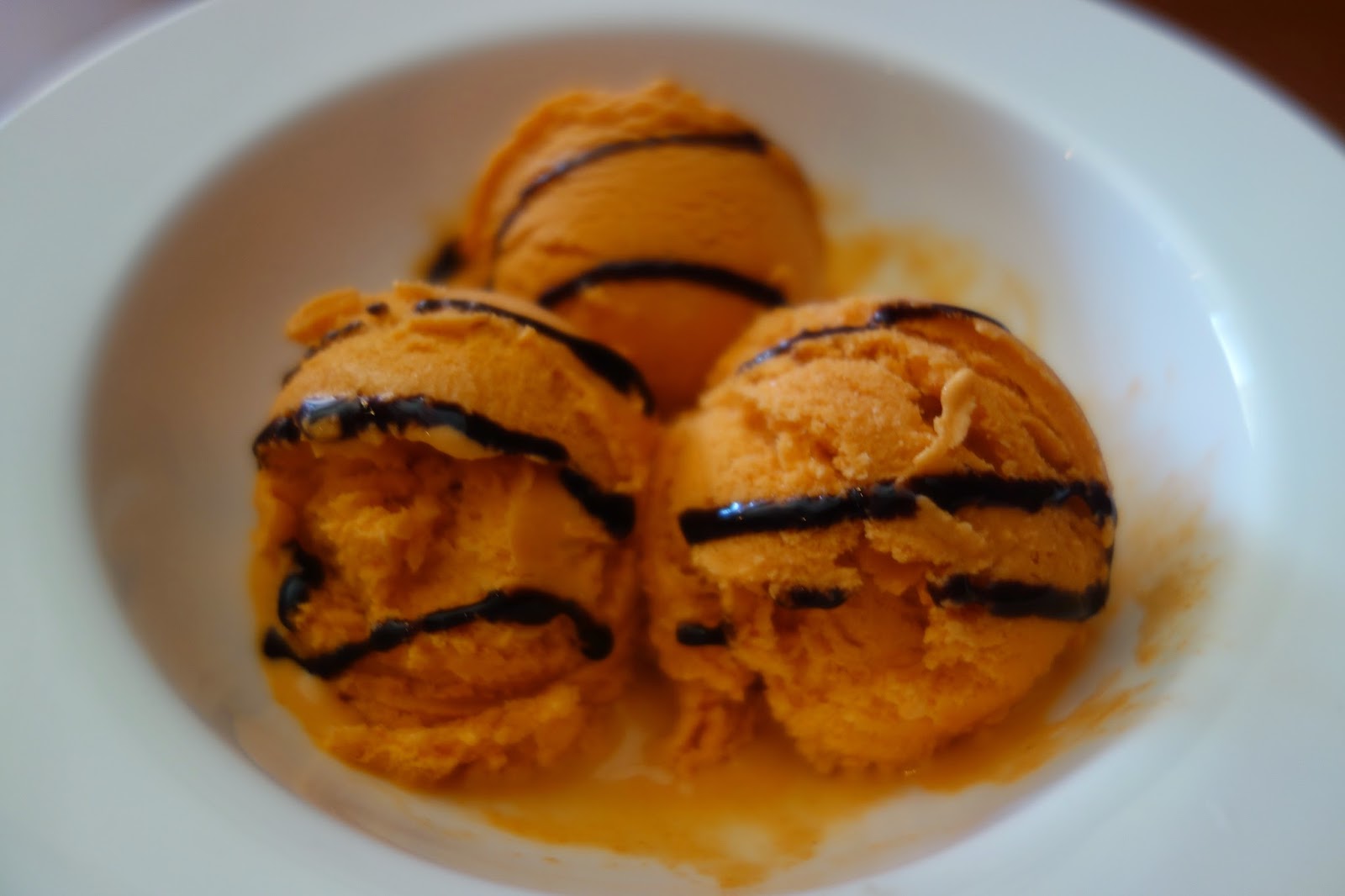 For dessert, we shared some Lucma Ice Cream, Lucma, or lucuma, is a Peruvian fruit, also known as egg fruit because its flesh seems to resemble the texture of a hard boiled egg. It was creamy and had a taste reminding me of butterscotch with citrus accents.

Lunch was very satisfying, and I would have liked to try many more dishes on the menu. This is certainly a more unique restaurant, with its authentic Peruvian items, and you should check it out if you travel out to the Berkshires. The next time I travel to that region, I'll be sure to return.

And be willing to give guinea pig a try.