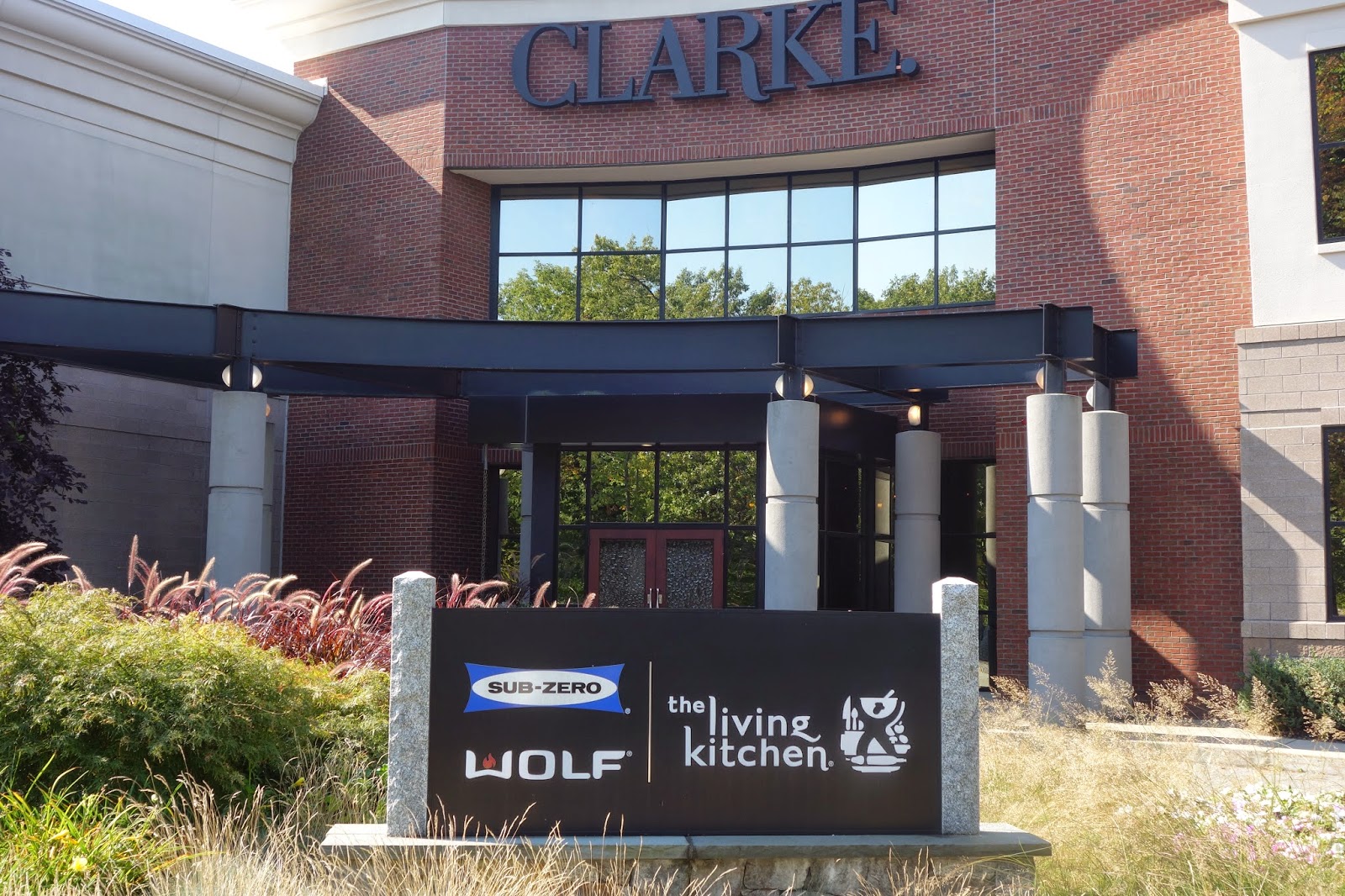 An epic battle of two Sushi titans. The U.S. versus Japan. Three arenas of engagement: Sashimi, Nigiri & Makimono. Five judges to determine the outcome. Who will prevail as the Champion of Sushi?

A couple weeks ago, I participated as a judge in a grand Sushi battle, pitting local Chef Tim Cushman, of O Ya Restaurant, against Chef Hisayoshi Iwa, of Sushi Iwa in Japan. The event was held at the Clarke Studio in Milford and was filmed for ABC Asahi Broadcasting, a national Japanese TV network, for their prime time cooking competition. You can check out one of their prior episodes here, though please know that it is all in Japanese. So, when this new episode airs, everything I said will be dubbed into Japanese. 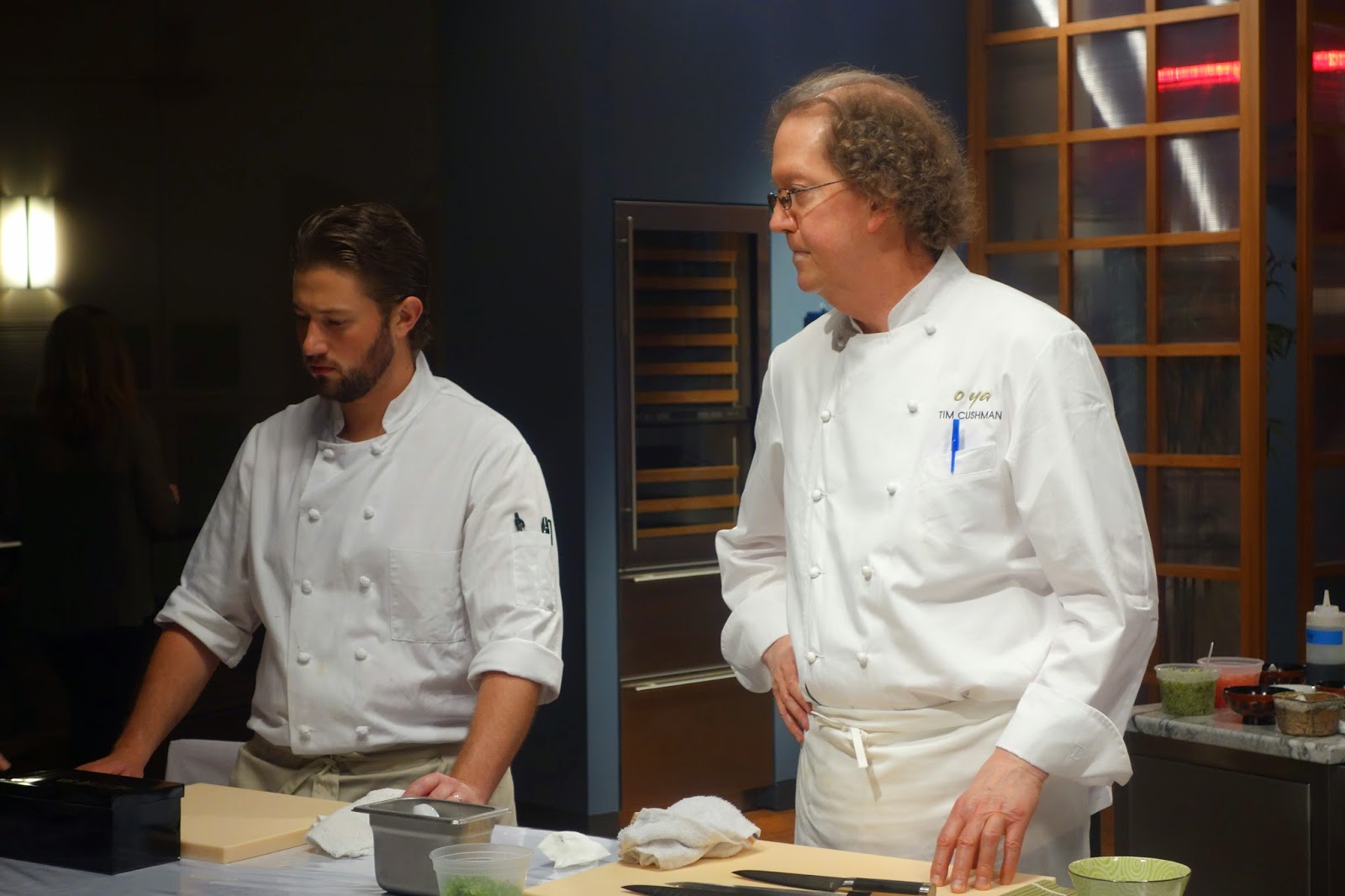 Chef Tim Cushman is well known in the Boston area, having won a James Beard Foundation Award as the Best Chef Northeast 2012. O Ya has received many awards and kudos over the years, being recognized nationwide as one of the top restaurants in Boston. Chef Cushman has recently opened a spot in New York City called Roof at Park South and is planning to open their second Boston restaurant, an izakaya, Hojoko at the Verb Hotel. 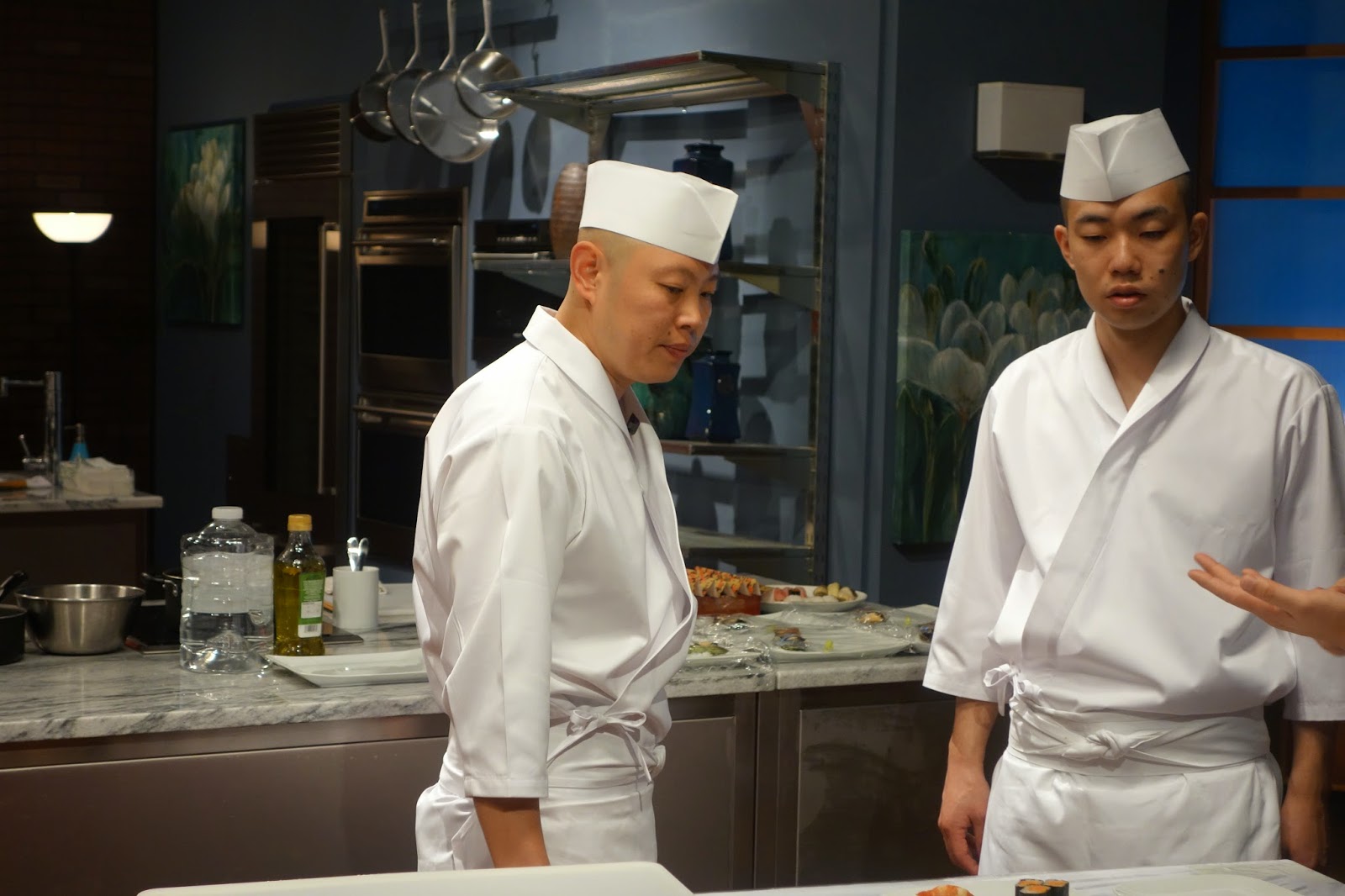 Chef Hisayoshi Iwa, who was very soft spoken at the event, opened his own restaurant in 2012 in the Ginza, which has already garnered a Michelin star. He has a second restaurant in Hong Kong. His restaurant has received much positive press, and though he doesn't have as much experience as Chef Cushman, it seems his sushi skills are well honed. Based on the experience of both chefs, I knew this was going to be a well-fought competition. 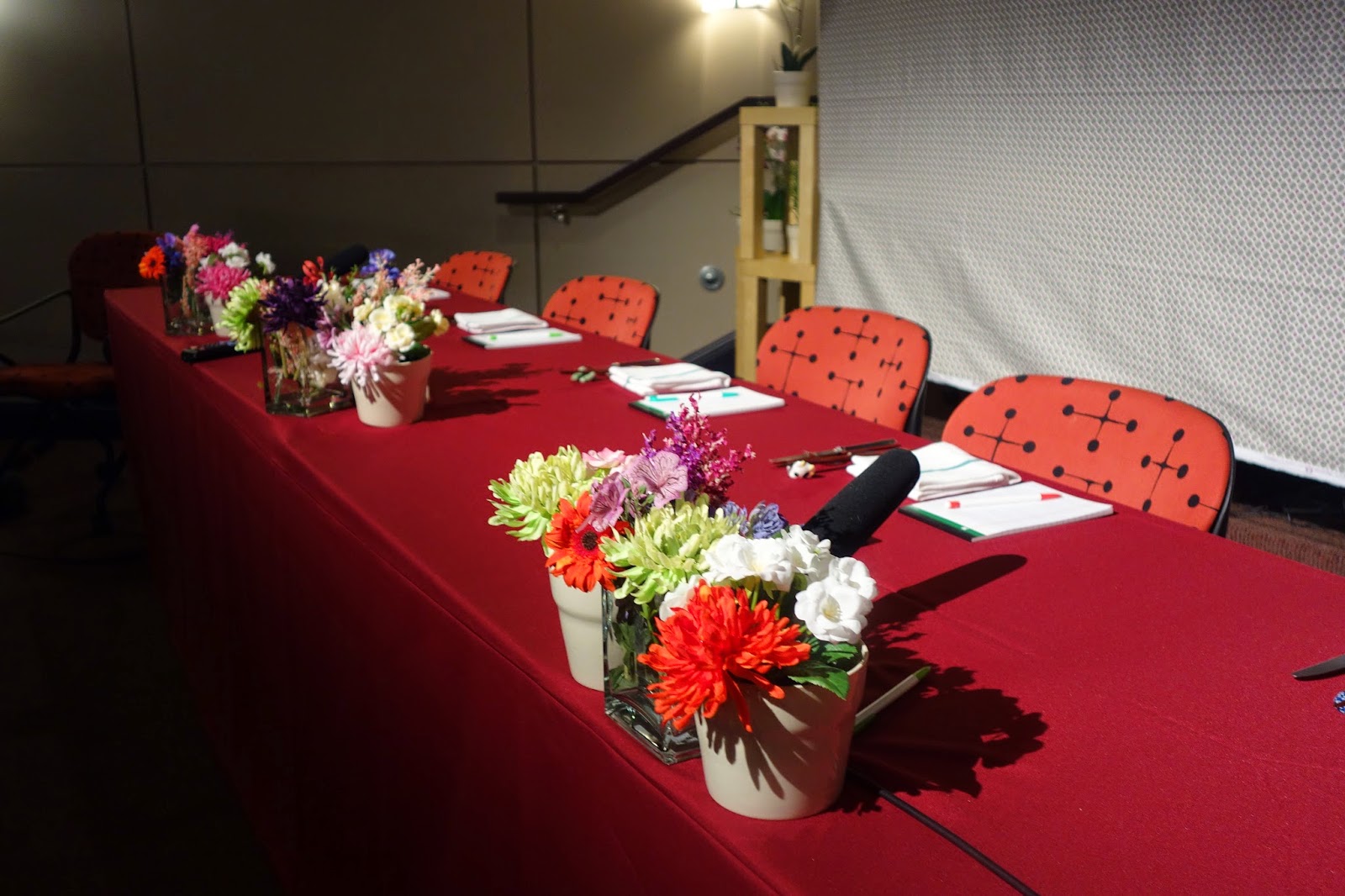 The other four people joining me on the judging panel included: Alison Arnett (a food writer and restaurant consultant), Dr. Merry White (Professor of Anthropology at Boston University & the author of several books on Japan), Jolyon Helterman (a food writer at Boston magazine), and Robert Goree (Assistant Professor of Japanese at Wellesley College). An excellent team with plenty of knowledge and experience. I was honored to be a part of this group.

At the beginning of the day, we all had to sign a release as the event was being televised, but there apparently was a mix-up. The first release form they gave us had a strange paragraph, "8. I am not gangster." Maybe that was for a different show, Sleeping With The Fishes. We quickly got the correct release, which didn't have such language and we were set to go. 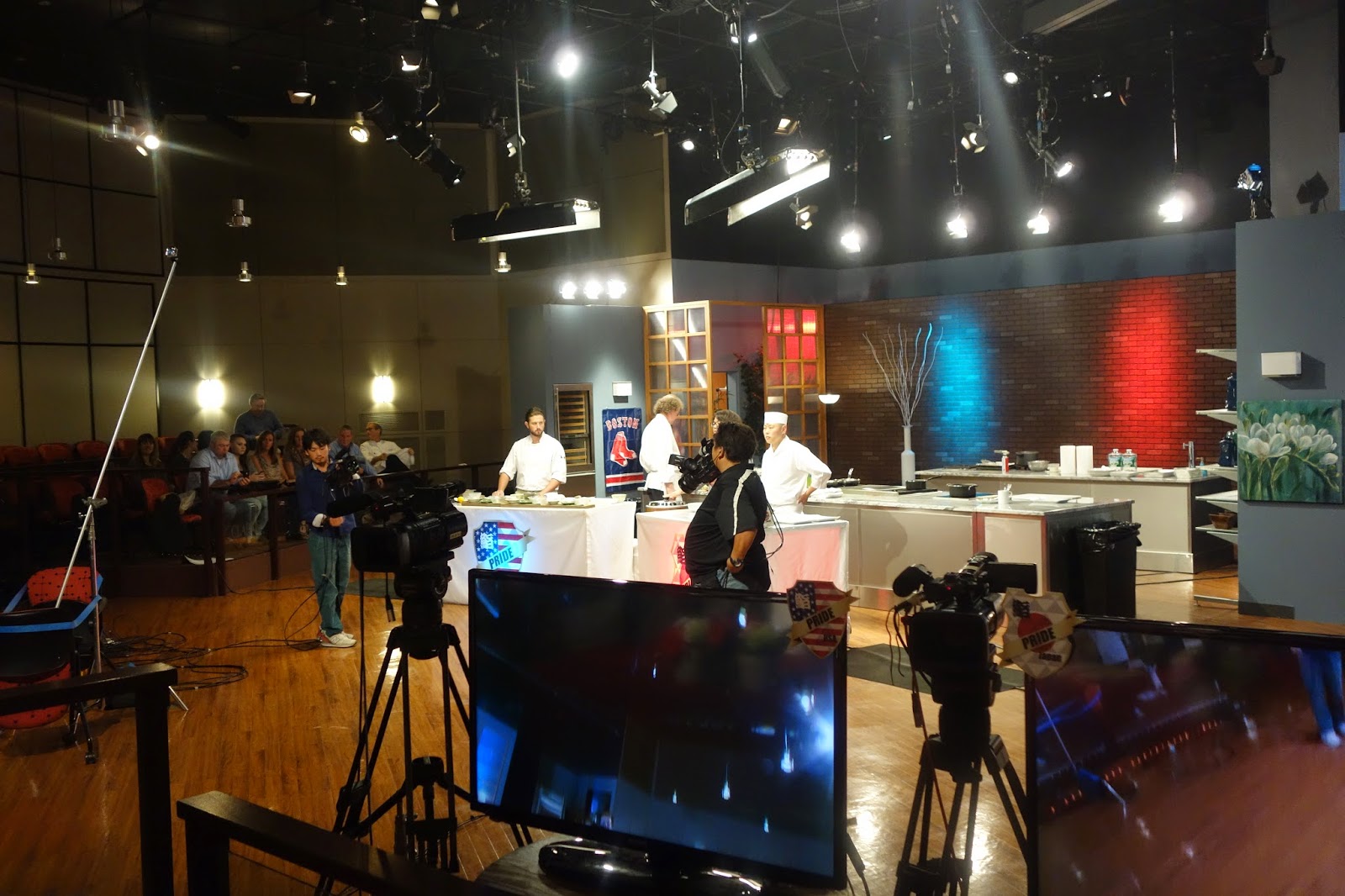 Filming for the show began several days before the competition. Some of the filming took place at O Ya Restaurant, where Chef Iwa got to sample Chef Cushman's cuisine, while other filming occurred while Chef Iwa shopped at the Boston pier for seafood. This was very different for Chef Iwa, having to rely upon the seafood available at the Boston pier, rather than the usual fish he could get at Tsukiji Market in Tokyo. In addition, film crews visited some of the judges, including myself, to get some footage of us at work. On the day of the actual competition, we were at the studio for about seven hours.

For this contest, each chef had to prepare three courses, including 3 Sashimi dishes, 6 different pieces of Nigiri, and 1 Lobster Maki roll (as they wanted to highlight a famed, local ingredient). And the chefs only had one hour to complete all of their dishes. The chefs had already done the shopping for their dishes, and knew what they wanted to prepare when they arrived at the studio kitchen. This wasn't really a timed competition as such, but more a comparison of techniques and styles. 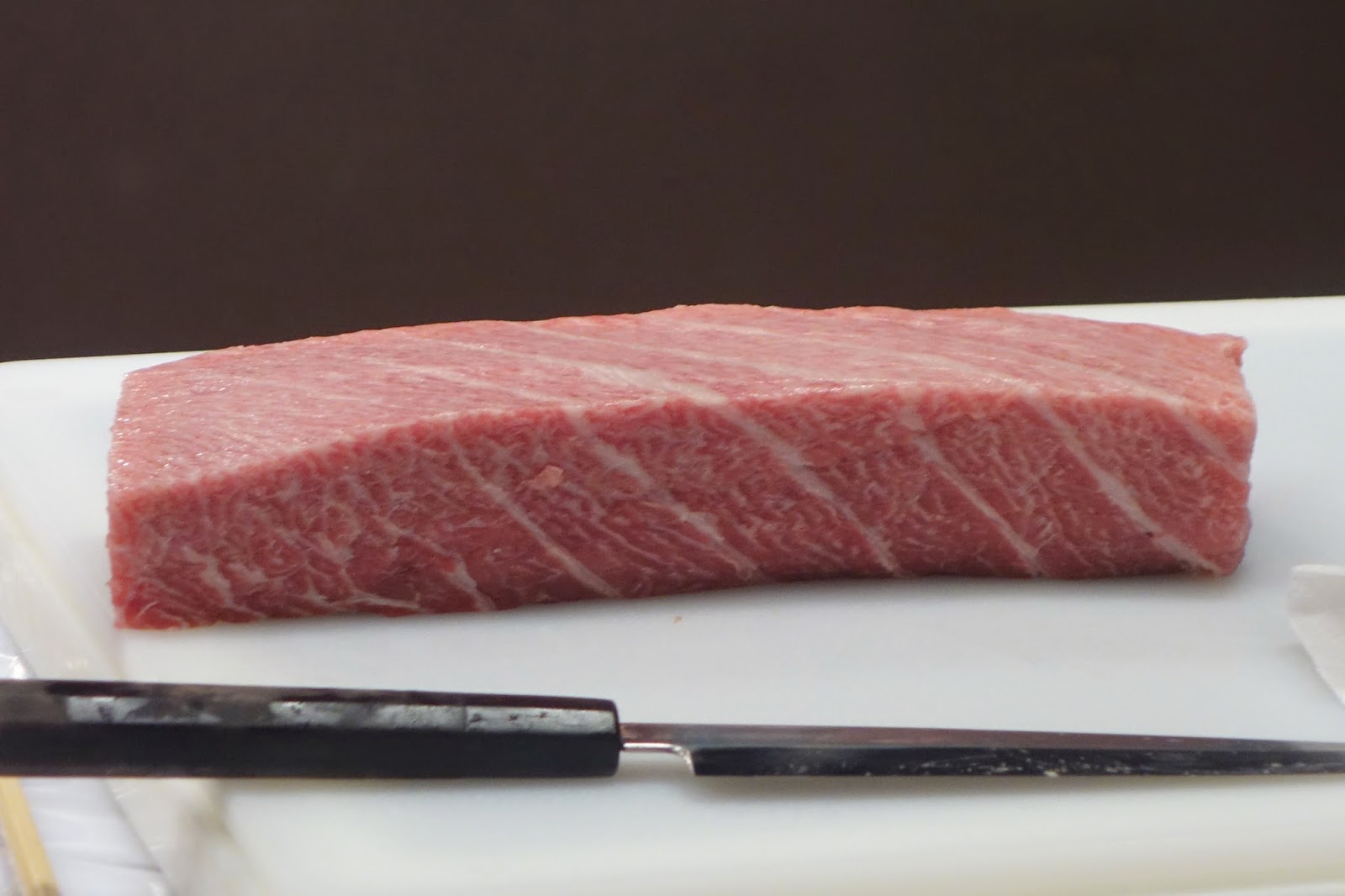 We got to watch the two chefs prepare all of their dishes within an hour, and it was fascinating to see how each chef worked. Chef Iwa was so precise, a master of the knife, able to cut the thinnest slices of fish. Above, you can see a smaller amount of a much larger piece which at first I thought might be Wagyu beef due to all the marbling, but it actually was a beautiful tuna. Chef Iwa's most intricate work may have been the squid he sliced into paper thin pieces. 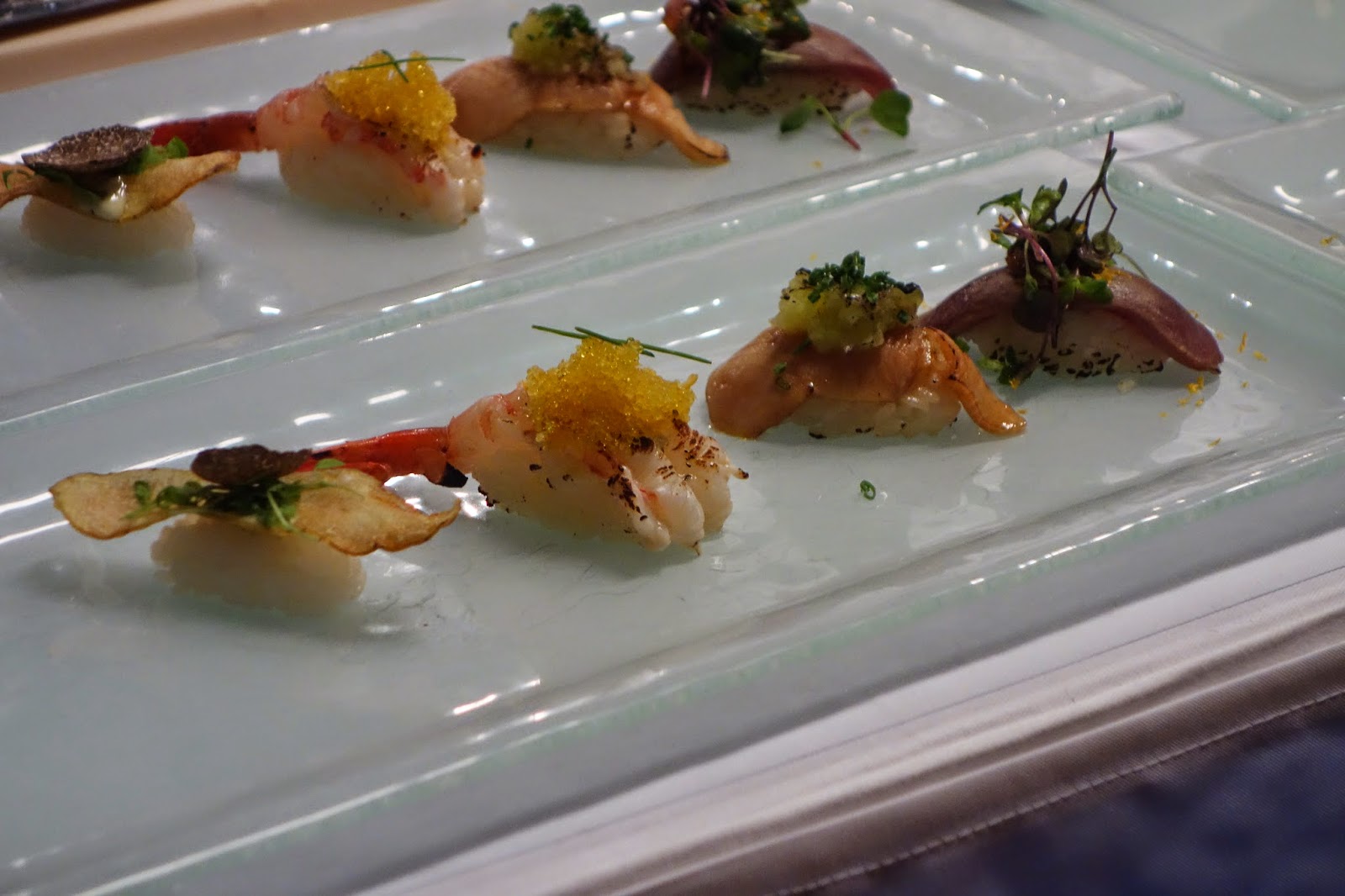 Chef Cushman resembled an artist, creating intricate combinations of ingredients, textures, colors and flavors. These were items that appealed to your eyes, drawing you into their beauty. These were some of the Nigiri pieces that he created, which even included a Potato Chip Nigiri, topped by a truffle. It might not be traditional, but one bite will make you not care. 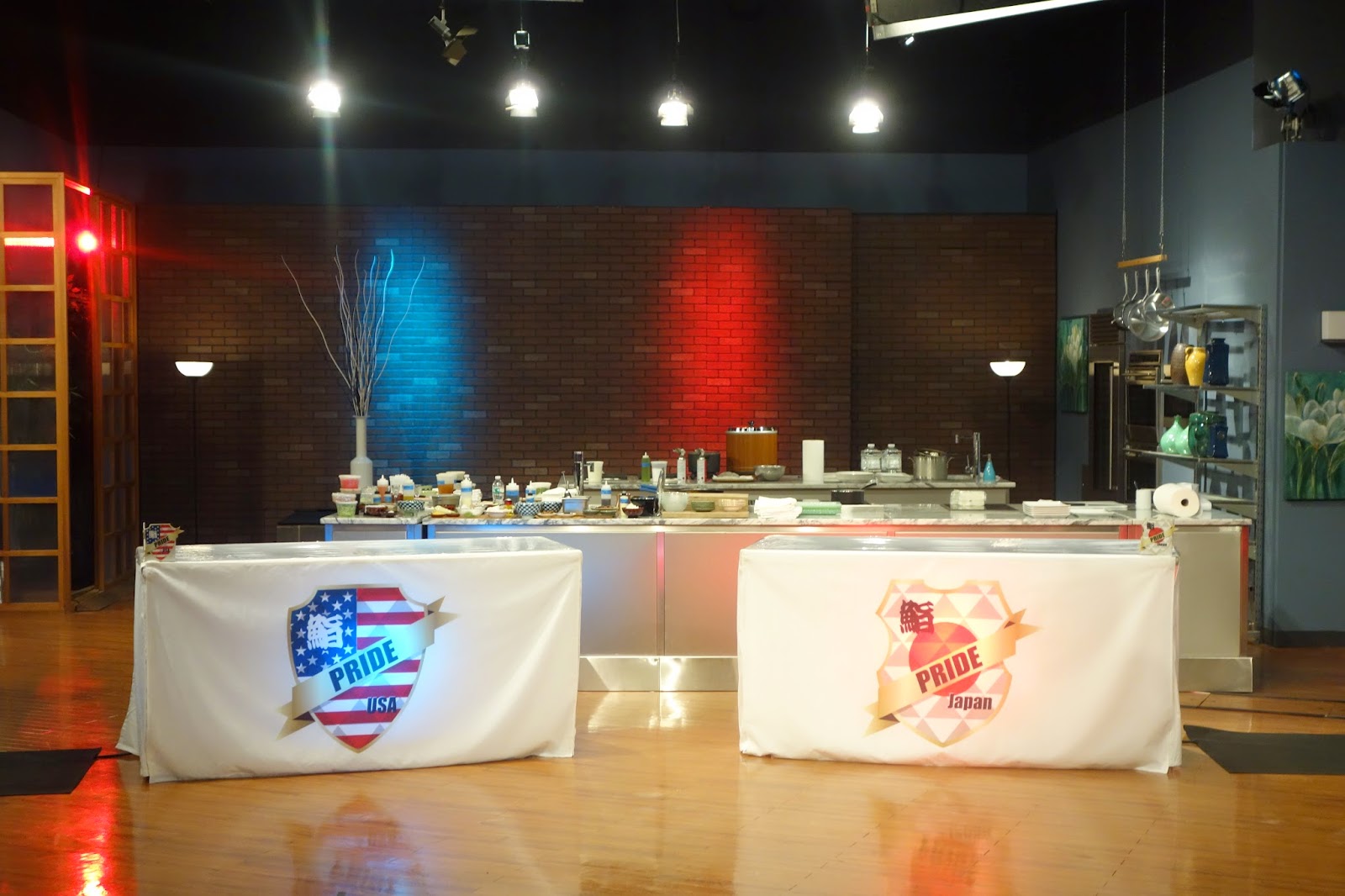 After the hour of preparation passed, the judges' table was moved and we were readied to taste the chef's creations. The chefs actually had to prepare and/or cook their dishes a second time, so that everything was fresh for us to taste. We began by sampling all of Chef Cushman's dishes and then sampled Chef Iwa's dishes. And as we ate, the filming continued, though I'm not sure anyone actually wants to see me chewing a piece of sushi. After we tasted some of the sushi, we were asked our impressions about a number of the items. With all the editing that will occur for the TV show, I'm sure much of that will end up on the cutting room floor.

I didn't dislike a single item I ate, and didn't leave any fish on my plates. Both chefs excelled, creating a compelling collection of sushi. However, there were significant differences between the styles of the two chefs, which made judging even more difficult. How do you choose between two different styles, when both are so excellent? In some ways, it was not a fair comparison, but we judges needed to make a decision. 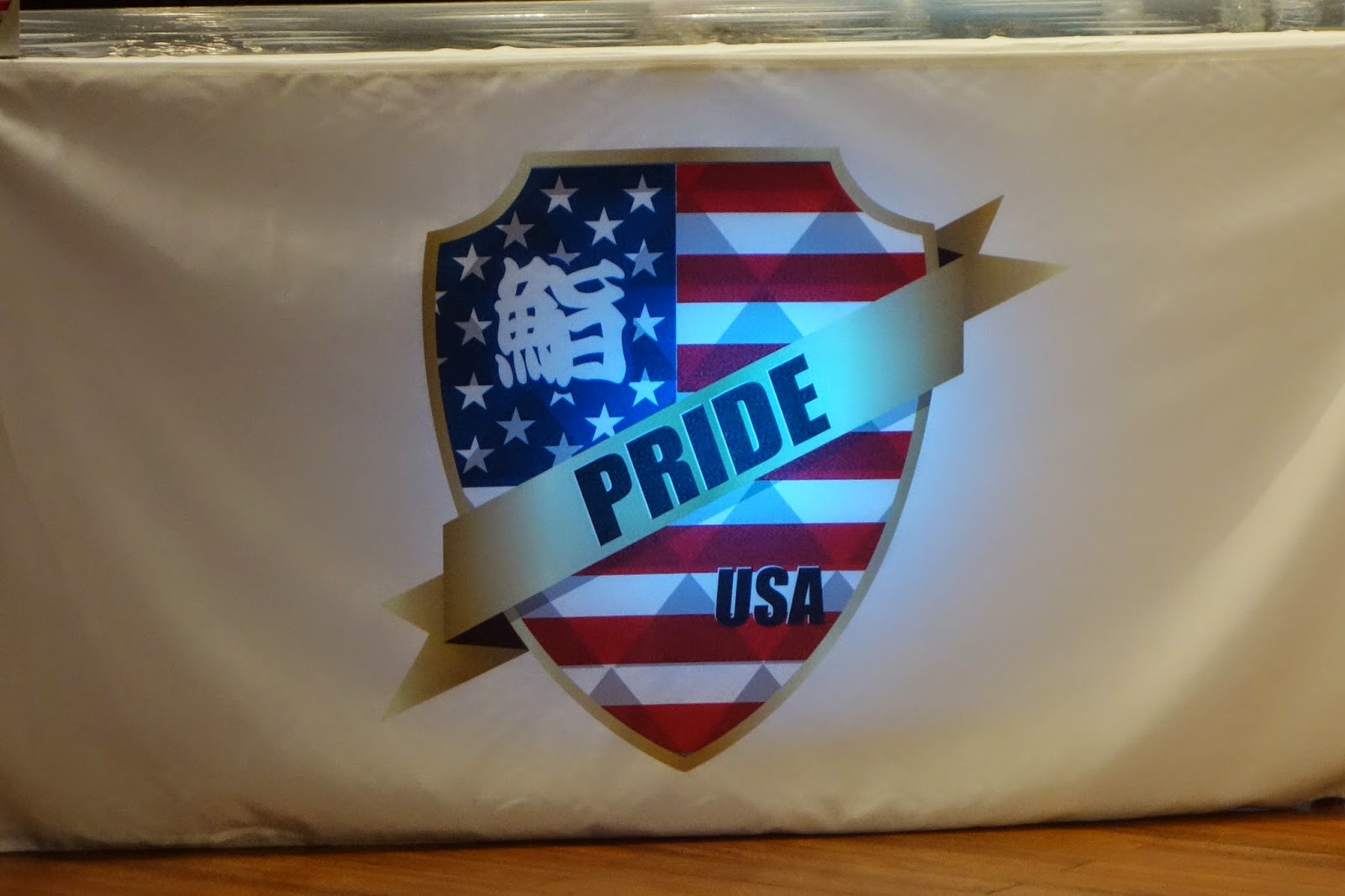 Chef Cushman prepared a number of dishes which you can find at his restaurant, creative and innovative sushi which are anything but simple. From a Fried Kumamoto Oyster with yuzu kosho aioli and squid ink bubbles to Hamachi with a spicy banana pepper mousse. From Maguro with soy braised garlic & microgreens to Foie Gras with balsamic chocolate kabayaki, claudio corallo raisin, cocoa pulp, and a sip of aged Sake. (We could have used some Sake for the entire competition.) His Hamachi with Viet mignonette, Thai basil, & shallot  was especially compelling. All of the dishes were well balanced, flavorful and intriguing. His reputation is well deserved.

On the other hand, Chef Iwa went more for simplicity of flavors and preparation. He was more traditional, letting the seafood largely speak for itself. There was Abalone and Ayu, Hamachi and Otoro, Ika and Eel, Fluke and Salmon. Chef Iwa also engaged in some firsts, as he had never previously worked with either Salmon or Lobster in creating sushi. I have to say that his Ika Nigiri (squid) was some of the best I've ever had, silky smooth and it was primarily due to his knife work. The grilled and marinated Ayu, sweetfish, presented a delicious meaty and smoky taste. His reputation too is very well deserved. 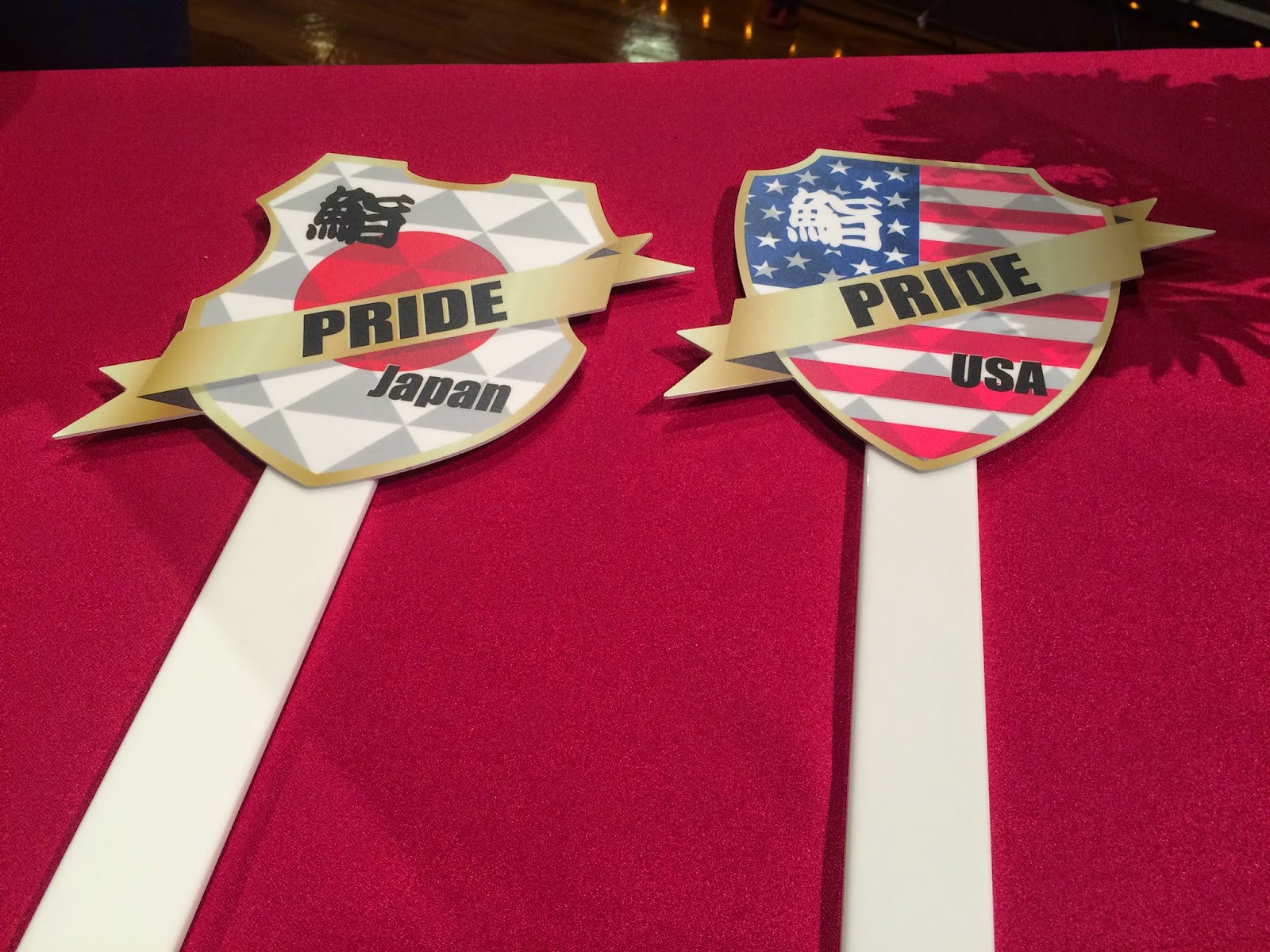 These were two very different experiences. Simplicity vs complexity. Subtlety vs boldness. Purity vs Harmony. Both experiences were equally compelling, but for different reasons. Trying to compare them is a formidable task. In some respects, it may devolve down to a matter of personal preference. In other respects, it may come down to the tiniest of differences. I certainly faced an enormous dilemma in trying to determine a winner, and my own difficulties were mirrored by the other judges. A winner had to chosen though. 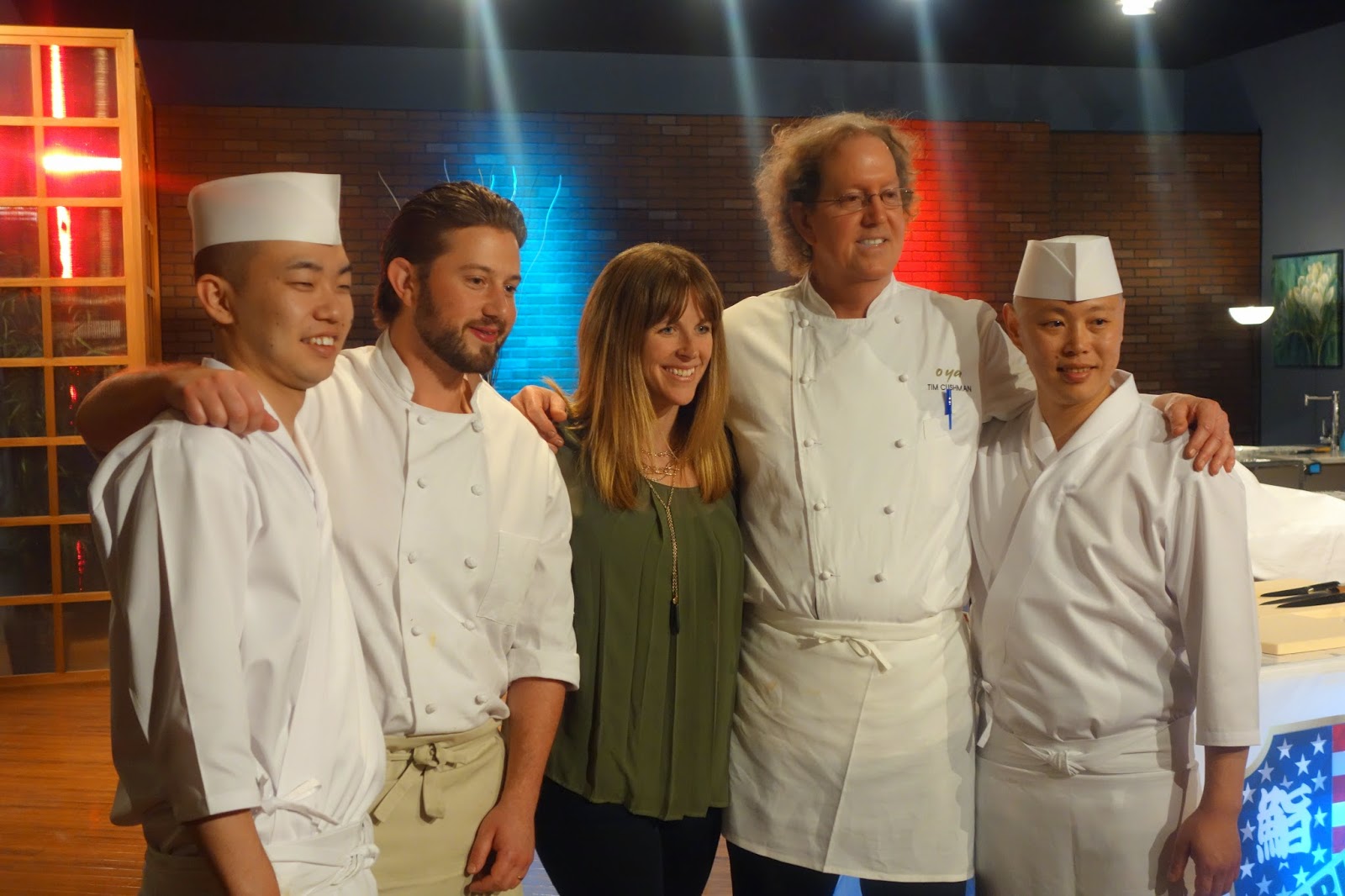 Unfortunately for my readers, I can't tell you who I voted for, or who won the competition. I'm currently bound by confidentiality so that I cannot say anything until the episode airs in Japan. Once it does, I will be sure to update this post and tell you all what happened.

What I can say is that both of these chefs are winners, having created excellent dishes which any Sushi lover would thoroughly enjoy. They each gave it their all, valiant competitors who showcased their skills and experience. Each chef should be absolutely proud of their efforts and hold their head up high.
Posted by Richard Auffrey at 3:30 AM

Hello Richard, I just saw the show here in Japan. Very interesting the different approaches to sushi making, though I dare say most Japanese are not that accommodating when it comes to foreign modifications of their national dish. Needless to say the studio audience was ecstatic at the result!

Thanks Matt for the info. Now I need to find a link online to the show. It was lots of fun.

Hey Richard! I was a big fan of this sushi battle show. They introduced lots of approaches to make sushi. I tried two of them. Well, I am not a cooking expert so I like eating outside. There are numerous Boston restaurants that serve sushi in their own style.