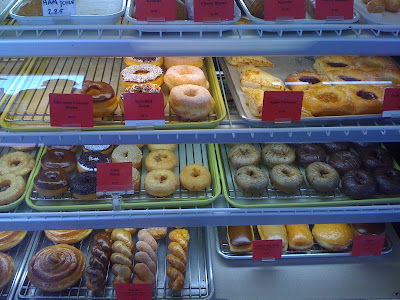 Forget Dunkin' Donuts and Honey Dew Donuts as the best donuts come from small, independent donut shops. This past weekend, I stumbled upon a new such shop and found plenty of donuts, muffins and pastries to enjoy.

Donut City, in Lynn, appears to be relatively new and occupies the space that once belonged to Java Brewin. I was driving down Route 107, headed into Salem, when I spied Donut City and decided to stop to check it out. Everything looked fresh and enticing, and there was plenty of variety. You'll find donuts, cinammon rolls, apple turnovers, croissants (plain and filled), muffins, kolache, eclairs, and much more. Donuts are $0.75 each. They also have breakfast sandwiches, such as bacon, egg & cheese ($2.99). 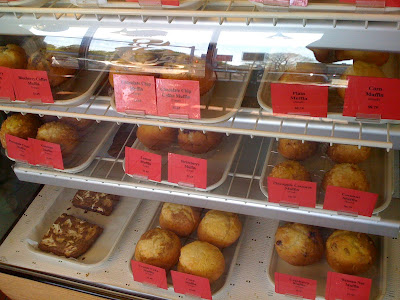 Their muffins come in small ($0.79) and large ($1.65) sizes, and I was excited to see they carry coconut muffins. Everything I tried was fresh and delicious, from the light glazed donuts to the large, cinnamon rolls. The coconut muffins were excellent too, moist and flavorful! There is no contest with those chain donut shops. I am going to have to stop by again to taste more of their items, including their breakfast sandwiches, but I expect that I will be pleased.

Lend your support to independent donut shops, and check out Donut City if you are in Lynn.

Thanks for this. I will check it out and point out this review to my readers.

I drove by this on Saturday and noticed it. Looks like a great place from the outside. Definitely something I want to check out.

Oh I'm craving a donut now. My favorite are the sugar-glazed ones!

I enjoy that they have a sandwich-board sign outside that says "DONUT NOW OPEN."

Donut City is SO good. I agree, chain doughnut shops just do not compare, quality wise, with smaller, independent shops.