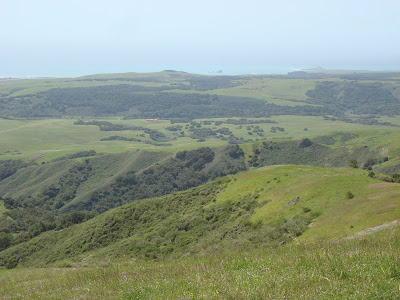 As far as I could see, I was viewing part of the 80,000 acres (128 square miles) of the Hearst Ranch. Part of my Paso Robles trip involved a visit to this ranch, to check out their grass-fed cattle ranching operation, as well as to taste the meat. When you think about Paso Robles, and the neighboring areas, you probably don't think about beef. I didn't, so was extremely interested in learning more about their cattle operations. 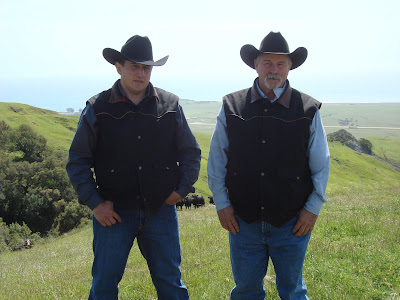 Our guides for the visit were two hard-working cowboys: Roland Camacho (on the left) and Cliff Garrison, the Ranch Manager. Surprisingly, there are only seven cowboys working at the ranch, tending to thousands of cattle. That seems such a low number for the vast expanses of land they must cover. As cowboys, they do ride horses and use cow dogs, generally collies and collie breeds, to assist with the work. Both Cliff and Roland were excellent and personable guides, answering all of our questions, and they clearly seem to enjoy their work.

Ranching has been conducted here for almost 150 years. Back in 1865, George Hearst purchased some ranch land in San Simeon, and began raising cattle, dairy cows, sheep, hogs, poultry and more. His son, the famed publisher William Randolph Hearst, continued with the ranching, and it is still going strong today. Over the years, the size of the ranch has varied, up and down, and it currently comprises 80,000 acres. They also own another ranch in Cholame which encompasses another 73,000 acres. 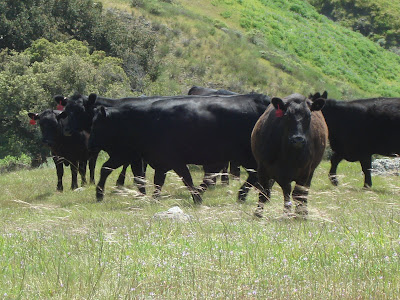 The ranch raises beef cows, basically British breeds including Hereford, Angus and Shorthorn. The land is also occupied by feral pigs and some prior zoo animals, including zebra and elk. There is approximately one cow for each 12-15 acres, so they actually have plenty of room to enlargen their herds if they so desired. They occasionally purchase new heifers, to expand the genetic diversity of the herds.

The cattle live a natural existence as foragers and grazers. "Grazing enhances a complex and balanced mosaic of native grasslands which in turn maintains vigor and distribution of these habitats, ensuring a sustainable food system. It keeps cattle on the range, fertilizes the land naturally, sustains a seasonal rhythm to the ranches and produces a remarkable meat whose flavor is the authentic taste of the American West."

The cattle are 100% organic, without the use of any hormones or antibiotics. If a cow does require antibiotics for some illness, which is rare, that cow will never be used as a beef cow. The cattle generally start grazing on the hillsides and are later finished on the flatlands. They are grass, not grain, finished. The biggest challenge is the seasons of the grass, as it is better during certain time periods. 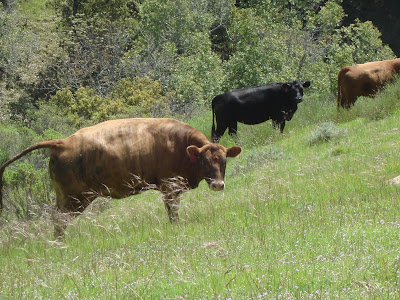 The cattle are harvested once a year, during either late spring or early summer. Harvesting is a euphemism for being slaughtered. Cows are generally harvested when they are 18-20 months old, and they will not harvest any older than 30 months. In total, they harvest about 1000 cattle each year, dealing with a single slaughterhouse in Merced. They do not produce any veal, though that might be a possibility in the future. If they do though, it would be free range veal.

The ranch sells their beef in all fifty states though California is their largest market, with New York in second place. The beef is pricey though, from two to four times the usual cost of similar cuts of beef. This goes to the heart of my post from yesterday, the balancing act between high financial cost and health benefits. The health benefits of grass fed beef are significant, including such items as 10 times more beta-carotene, three times more vitamin E, and three times more Omega-3 fatty acids. Plus, it is sustainable, and thus much better for the environment. So what is most important to you?

Well, it is important to first understand its taste, and whether it is good or not. I tasted three cuts of their grass-fed beef, including New York strip, rib eye and tenderloin, which were served on large platters. For a carnivore like me, this was quite a treat. The meat was very flavorful, with a nice beefy taste. I think my favorite was the New York strip, though the ribeye was a close second. I certainly devoured a fair share of the beef, and probably could have eaten even more if I hadn't been headed to dinner afterwards. So, you do get a very delicious and healthy piece of beef for the higher cost. 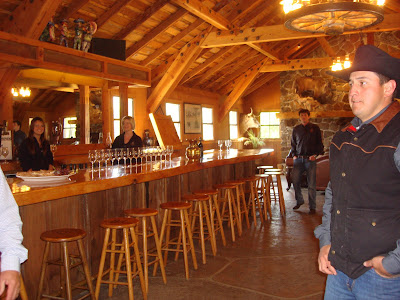 The Hearst Ranch has started their own winery as well, and the beautiful tasting room (pictured above) has recently opened. They currently produce six wines, a total of about 8000 cases. Their wines include a Chardonnay, Merlot, Cabernet Franc, Cabernet Sauvignon, Bordeaux-style blend, and a Late Harvest Zinfandel. The Chardonnay is from the Santa Lucia Highlands AVA and the other wines are from the Paso Robles AVA. The wines are all named after places connected to the Hearst family or ranch, including Glacier Ridge, Pico Creek, Lone Tree, The Point, Enchantment, and Bunkhouse. They are priced from $25-$70.

I sampled a few of their wines and they show some promise, but I feel they are over-priced at this point. To me, they were not showing sufficient complexity and character to justify their prices. But if you are in the area, stop by the tasting room and check out the wines for yourself. 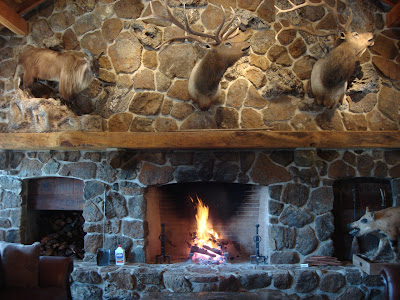 The above is at one end of the large tasting room, which can also function as an event venue. This would be a cool place to sit and savor some wine.
Posted by Richard Auffrey at 5:00 AM

Looks like a cool trip! I've been wondering if there's any place to get grass-fed beef closer to Boston...know of any?

Seth - Go to www.eatwild.com and you'll find all the grass-fed ranchers in your area, plus a list of farmers' markets, retail stores, co-ops and buying clubs. You'll find what you want within a country drive from your house. Eat well!
Jo Robinson

I was looking for information about grass pastures, etc. and came upon your blog. I love stuff about nutrition and food as well, so you hit both marks. Thanks so much! I've had a good look around, and I'm sure I'll be back soon. Plant and Garden Blog

Thanks very much Jo for that link. It certainly provides plenty of information on finding local grass-fed products.

Thanks for the kind words Ann, and hope you keep returning here.

I ordered some ribeye steaks earlier this year after visiting the Castle and all I can say is that they were about the best rib steaks I have ever had--as good as the best prime rib in any restaurant. And I just cooked them up on my grill. If grass-fed beef tastes this good, why is it all you can get in the stores in corn-fed, chemically modified beef? For the answer, read "Omnivore's Dilemma". Not a pretty story.

Why cant we get this in fresno??