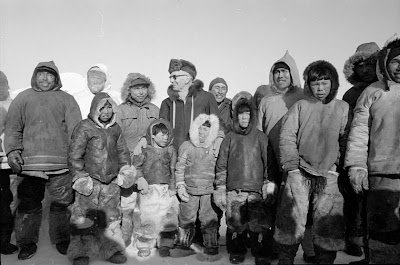 (Yes, this was an April Fools' joke)

Boston may soon be the setting for a divisive battle over plans for a new restaurant, owned and operated by an Inuit family. The Inuit are indigenous people of the Arctic regions, those who were once more commonly known as Eskimos. "Eskimo" though is often considered a derogatory term, and is rarely used any longer.

I received some preliminary information about this proposed restaurant as I believe the PR company wants to test the waters, to ascertain how the public might react. Due to the potential controversy, the PR company would like to garner some initial support before actually challenging the city of Boston. This might be a good strategy and save the owner money if the public outcry is overwhelming.

The restaurant will tentatively be named "Noatak," which means "river that provides food for the people." They are scouting a location in the South End because of its diverse, international cuisine and as they believe the residents of that neighborhood might be more open to the restaurant. The concept will be traditional and authentic Inuit cuisine, which is at the crux of the controversy.

The cuisine will be heavy on seafood, meat and poultry while still having some vegetation and seafood. There will be plenty of salmon, Arctic char and trout. Caribou and a variety of arctic birds will also be served. That sounds relatively normal but the menu will be even more exotic, with seal, walrus, whale and even polar bear! You will even see raw blubber on the menu. And that is the problem. Will the City of Boston allow them to serve such fare?

All of the seals, walrus, whales and polar bears will be legally caught by Inuit in the Arctic region, quick-frozen and then immediately shipped to the Boston area. Noatak is intended to be authentic so these foods need to be on the menu. But are Boston diners ready for such items? These items will be served in a variety of ways, including raw (like sashimi) and grilled.
Noatak will also serve some very unique Inuit dishes such as "kiviak." This entails burying a dead seal in the ground that has been stuffed with 70-80 seabirds. After six months, the inside of the birds has fermented. Then, you remove the birds, rip out their tailfeathers and suck out the liquid interior through the anus. This is an Inuit delicacy, but which is also one of the smelliest foods in the world. It may be worse than even Durian. I am not sure Boston would approve of the preparation and serving of such a bizarre item.

So what are your thoughts on this new restaurant and its exotic cuisine? Should Boston allow it? Would you partake of seal and whale? How about kiviak?
Posted by Richard Auffrey at 3:15 AM

I’ve never understood why it is that eating whale and other marine mammals is verboten. As long as it’s done in a sustainable way, what’s the problem?

I can still remember an expisode of Anthony Bourdain’s No Reservations in which he attends an Inuit family dinner. The freshly killed seal is splayed open on the kitchen floor, where several generations of the family joyfully eat it raw. Even the parts that made it on camera were pretty gory (there was blood everywhere). I don’t speak Inuit, but I imagine there was a lot of “Grandma, I just ate the eyeballs, why don’t YOU eat the spleen!” In other words, it was vintage Bourdain – totally different, yet heartwarming.

But yes, I’d love to try some of this stuff. I think I’ll pass on the kiviak though.

I agree. with the previous comment. Individual cultures should me celebrated, not imposed on because of culinary correctness. Boston may be a bit too SAVE THE WHALES for the place, but I bet it would work here in New York!