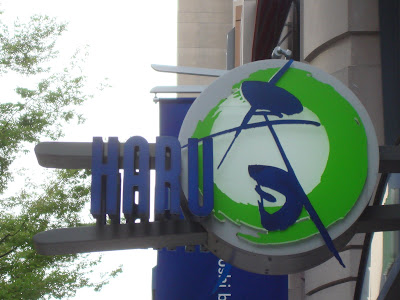 A couple poor experiences had kept me away from Haru, a Japanese restaurant below the shops of the Prudential Center, for about two years. My first experience had been back in December 2007, when Haru was still newly opened. I noted some issues, primarily with service and their tempura, but figured that as they were knew, such matters would be addressed. The restaurant had potential and I hoped for the best.

But a couple follow-up trips in the subsequent months did not please me, and I did not see any changes, except maybe some negative ones. There were still service issues, the tempura was still poor, and some of the other dishes just were not good. So I went elsewhere.

I was recently invited back, to see what changes they had wrought since then. There was a new General Manager, and matters had supposedly improved. I decided to give it a try, to see whether that was true or not. 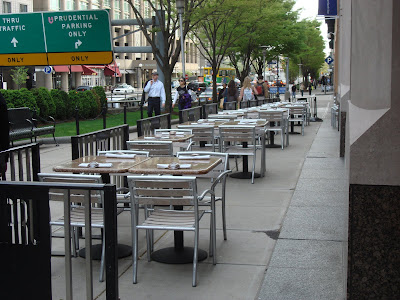 Before entering the restaurant, I note that they now have patio dining outside, along Huntington Avenue, a sizeable number of tables which can accomodate a decent crowd. 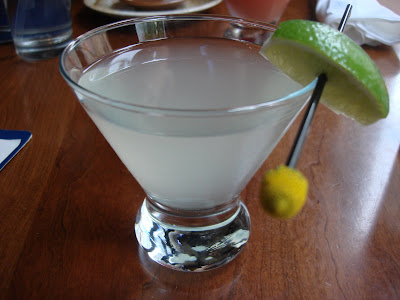 Their drink menu does not seem to have changed much, except for the addition of some new speciality cocktails. They still carry a decent Saké selection, and I enjoyed a few glasses of their different choices, including the Kaori and Kira. I also tried one of their new concoctions, the Electriquila! This is a blend of tequila, Saké, and yuzu, accompanied by a yellow flower pictured above. That is actually a Sichuan button, rarely found in Boston restaurants. You bite down on the flower and wait 5-10 seconds, and will then feel a tingling in your mouth, like an electrical buzz. It actually made the back of my tongue numb, and then you are supposed to drink. It was an unusual experience, and the drink itself was tasty. 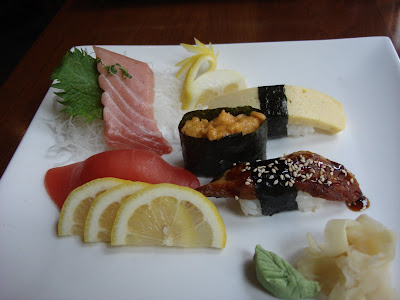 Their nigiri and sashimi remain a strongpoint, very fresh fish, large pieces and well presented. The O-toro was exceptional, melting in my mouth like soft butter. The sushi is pricier than the average sushi place, but not as expensive as some of the high-end restaurants. Sushi is sold by the piece, rather than in a pair. So two pieces of maguro, tuna, would cost $7, which would be $2 more than the average place, and $2-$3 less than a high-end place. For the high quality, the added price seems reasonable. 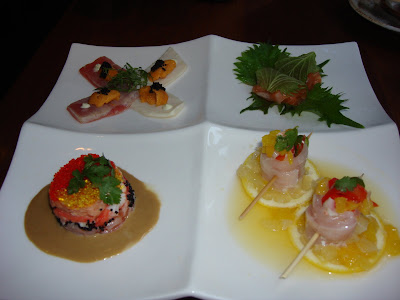 This sampler included four, smaller portions of some of their appetizers. Starting with the top left, and moving clockwise, the dish included: seared tuna & white tuna; salmon wrapped with shiso leaf; lobter mango ceviche and a tuna tartare. I very much enjoyed all of these items, especially the tartare. The flavors of each blended well together, with nothing overwhelming the rest of the dish. Plus, presentation was very nice, and this would be a good way to taste various dishes without ordering four separate appetizers. 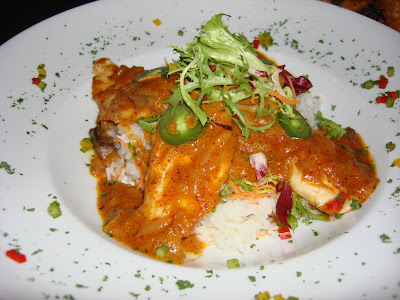 The Chicken Kazan was a Special, and has slices of chicken in a spicy massaman curry sauce with jalapenos, and atop a bed of rice. The thin slices of chicken were tender and moist, and I very much enjoyed the spicy and coconut flavors of the sauce. It was not overly spicy, except if you chose to eat the jalapenos. It was a plentiful dish too, lots of food for an appetizer. I should note that generally all of the appetizers had generous portions. 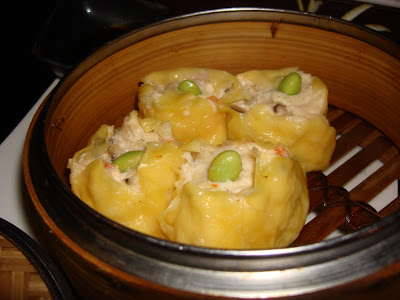 The Shrimp Shumai are a bit different from what you might be used to, as they are much larger and also include some edamame. They are certainly heavier than the usual shumai, but have a very good taste, with prominent shrimp flavors. The addition of the edamame adds a bit of a nice, crunchy texture too. These are a good change of pace from the usual shumai. 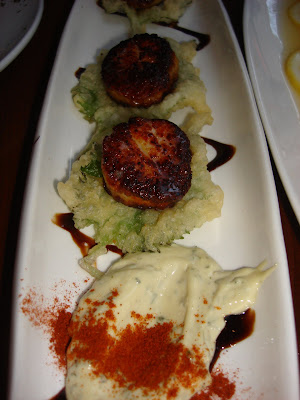 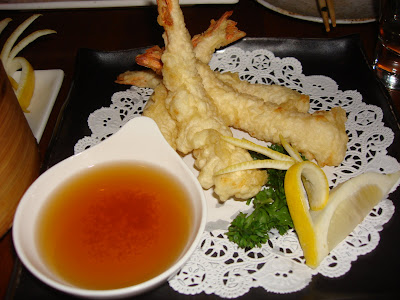 But there was an issue with the Tempura Shrimp, the same one I had two years before. The tempura batter was too thick, maybe overcooked, and felt spongy when I touched. It was not the light and crispy tempura which it should have been. It was also very different from the tempura on the shiso leaf, which had been done well. 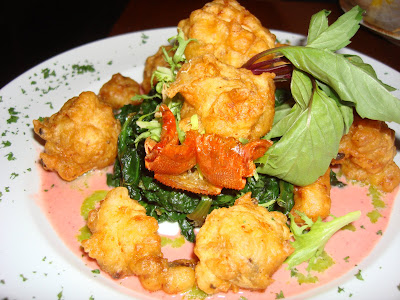 The Lobster Tempura, a Special appetizer, was even more disappointing, and seemed to have an even thicker batter. The batter also concealed the taste of the lobster. Three different tempura dishes, and three different results. This was essentially my only complaint of the evening, and it is an issue that has plagued the restaurant since the opening.

I mentioned the tempura issue to the restaurant and received a reply from General Manager Michael Slavin. "After researching our Tempura Batter recipe, I found out we were not adding enough liquid to the batter. This is totally an oversight on my part. We have since modified our recipe to reflect what every other Restaurant in the Haru concept does; 4 parts tempura batter to 4 parts water and 1 part soda water (previously it was on a one to one scale). Since “revising” our in-house recipe, the consistency is much lighter and crispier on all of the Tempura items."

I will return to Haru in the near future to check out the tempura and hope that this issue gets resolved. 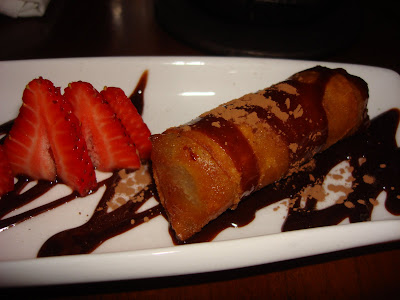 For dessert, I had the Banana Spring Roll, which came with strawberry slices and chocolate. you get two decent-sized rolls on your plate, and they were quite tasty with a crisp outer roll and warm, bananas inside. The addition of the chocolate enhanced the flavors and the strawberries were fairly sweet too. I would certainly order this dessert again, and it is large enough to share.

Service was exceptional, and the servers at the other tables appeared to be doing well and acting professionally. Service apparently had improved dramatically since my prior visits. Our server knew the food and drink menus well, and was attentive without being overbearing. All of the servers seemed to be busy working, rather than hovering together chatting.

Overall, positive changes do appear to have been made at Haru over the last couple years. But they still fail on the matter of their tempura. I will report back on the tempura matter in the near future.

Haru
55 Huntington Avenue
Boston, MA 02199
(Beneath the shops at the Prudential Center)