Does your olive oil taste like baby vomit? Yes, that is certainly a very strange question, but I will explain the relevance shortly.

As I mentioned yesterday, we had a Pasolivo olive oil tasting during our lunch at Thomas Hill Organics. You might not know but the history of olive oil in the San Luis Obispo region extends back to the 1700s when Spaniards planted olive trees at various missions. By the mid-1800s, there was a thriving olive oil industry there, and the industry continues to the present. There are currently over 25 olive oil producers in San Luis Obispo County. 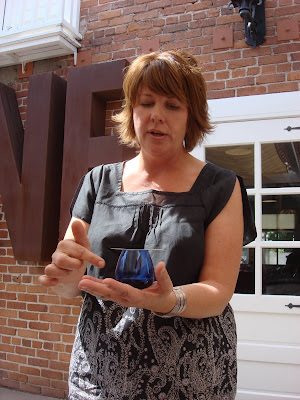 Joeli Yaguda, pictured above, led us on our olive oil tasting and she was a fun and knowledgeable person. I sat next to her and she was an engaging conversationalist. Karen Guth began planting olive trees on her 140-acre ranch, Willow Creek, in 1996. Her son, Joshua Yaguda, learned the art of olive milling and Joeli, his wife, assists with their business, Pasolivo.

The ranch has over 55 acres planted with more than 9000 olive trees. There are a dozen olive types including: Ascolano, Coratina, Frantoio, Kalamata, Leccino, Lucca, Manzanillo, Mission, Moraiolo, Pendolino, and Sevillano. They have farmed organically for five years but do not possess any certification. In 2005, they imported a Pieralisi Major II press, a state of the art olive mill from Italy which has really assisted in production. 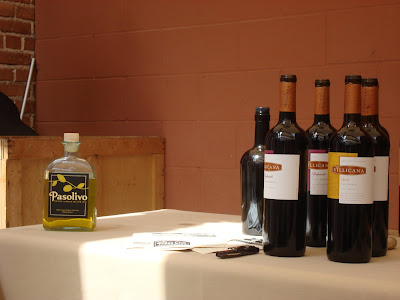 They used to make the infusion oils with fruit peels but that became more difficult with their new pressing machine, so they now use distilled, organic citrus oils.

Now back to the baby vomit. Joeli shared with us a copy of an Olive Oil Tasting Wheel, which describes the terminology used to describe the smell and taste of olive oils. And one of those descriptors is baby vomit! Obviously it is a flaw, and if I ever tasted it in olive oil, I would never touch that brand again.

You may be familiar with the Wine Aroma Wheel, which was developed in the early 1980s. A similar item, the Mojet Wheel, was designed in 1993 to describe olive oil. It provided fifty different descriptors but that apparently was insufficient. Thus, Richard Gawel, of the Australian Olive Association Tasting Panel, created the Recognose Wheel, a more advanced version which has 72 descriptors, 25 which concern flaws. The descriptors were compiled by analyzing their occurrence in olive oil tasting notes and the experiences of top olive oil tasters.

So baby vomit must be a common enough flaw to have earned itself a spot on this wheel. Other flaws included bacon (how can anything bacon-flavored be a flaw?), cucumber, earthy and blue cheese. Who knew olive oil could be so complex?

We did a taste test of the Tuscan and California blends, using the blue glasses you can see in the top photo. We would first inhale, taking in the scent of the olive oils, and then taste it, swirling it around our mouths as if we were tasting wine. The Tuscan blend seemed more herbaceous, with some bitterness on the finish, while the California blend had more fruit in the taste, even hints of banana, and seemed less bitter on the finish.

I received a bottle of the Tuscan blend to take home, and have been using it, from cooking to simply dipping some fresh bread into it. It has a delicious freshness to it, and is comparable to many other olive oils I have tried from Italy and Spain. Next time you are considering buying some olive oil, give some consideration to those from Paso Robles.

And beware of baby vomit!
Posted by Richard Auffrey at 5:45 AM

Hello!! My name is SIMAUMA. I write blog about the food.Please look.And I am glad if I link to your blog. (URL)http://food-collection-simauma.blogspot.com/

Great posting! I've never been to an olive oil tasting or even compared the several in my kitchen side-by-side, I just seem to know which I like with what..but now I am inspired! Thanks!

Thanks Tara! Please come back and tell me if you do decide to do an olive oil tasting.