During my Paso Robles trip, I knew that my free time would be very limited so I had to very carefully decide how to spend that available time. Rather than just relax in my room, I wanted to be active, to experience more of the city and what it had to offer. I learned that there were about twenty winery tasting rooms in downtown Paso Robles and thought that maybe I would visit a few.

So I did some research, including on Twitter, and one of the wineries that interested me was Anglim Winery. Anglim Winery is a small winery owned by Steve and Steffanie Anglim. I spoke to Steffanie (who was very personable and accomodating) through Twitter and she arranged an appointment for me to come in to taste their wines. Anglim is fairly active on Twitter, and you might like to follow them too. 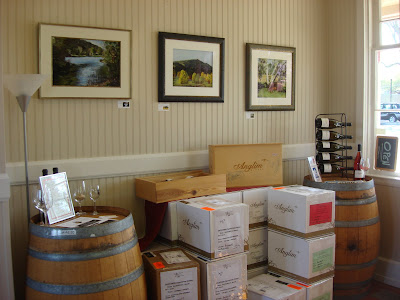 The Anglims started off as home winemakers and their hobby quickly became a driving passion that eventually led to their decision to start a commercial winery. Steve is the winemaker and head of operations while Steffanie assists with winery sales and marketing activities. Their two daughters also help out with the winery. So it is truly a family business. Their tasting room, which opened in May 2005, is situated within a historic train depot building, which was converted to retail space after a new depot was constructed.

The Anglims do not grow any of their own grapes, instead sourcing excellent fruit from a number of Paso Robles growers, plus a couple from outside the AVA. They have primarily focused on Rhône varietals and blends, but also make a few other wines, including Pinot Noir. Steve really loves Pinot Noir so he had a great desire to produce some of his own. Their annual production is limited to less than 4000 cases, and many of those wines are single vineyard bottlings. It is a boutique winery, a small operation that is a labor of love. 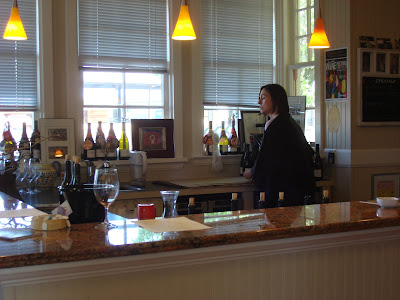 Steffanie Anglim behind the tasting bar.

The first Anglim wine I tasted, the 2006 Cameo, set the stage for the rest of the tasting. It thoroughly impressed me, and I was extremely glad that I had chosen to visit their tasting room. I was not disappointed with the subsequent wines either, and feel they are doing an excellent job, especially with Rhône grapes.

The 2006 Cameo ($22) is a blend of 50% Marsanne, 25% Roussanne, and 25% Viognier from Paso Robles vineyards. Only 560 cases were produced and it has an alcohol content of 14.4%. Its nose was very aromatic and compelling, an alluring blend of fruit and floral elements. The flavor was delicious, with nuanced tastes of ripe melon, pear, citrus, mild spice and some mineral notes. Plenty of acidity, the wine was well balanced with a very pleasing finish. A wine with lots of character and it gets my highest recommendation. This would be an excellent summer wine, savoring it in the sunshine as a gentle breeze wafts through the air.

The 2008 Grenache Blanc, Red Cedar Vineyard ($28) is made from 100% Grenache Blanc, and it is their first vintage of this wine. Only 168 cases were produced and it has an alcohol content of 14.4%. A pleasant fruity smell with a palate emphasizing lush pear, grapefruit aromas and a bit of green apple. Very crisp and refreshing, it has a nice, clean finish. This would pair well with some moist chicken or white fish.

Next up, there were two different Pinot Noirs, both from Santa Barbara County. One was more feminine and the other more masculine.

The 2007 Pinot Noir, Bien Nacido Vineyard ($34) is made from 100% Pinot Noir from the Bien Nacido Vineyard in Santa Maria Valley. Only 135 cases were produced and it has an alcohol content of 14.8%. This was their first Pinot Noir from this vineyard. The wine had a very light red color with a spicy and floral nose. The taste had plenty of bright cherry with a spice-filled finish. It was a light, elegant wine and definitely seemed the more feminine of the two.

My personal preference was the 2007 Pinot Noir, Fiddlestix Vineyard ($48), which is made from 100% Pinot Noir from the Santa Rita Hills of Santa Barbara County. Only 140 cases were produced and it has an alcohol content of 14.9%. This is their third vintage of this wine, and it has the same light color, maybe a shade darker, as the other Pinot. Yet this was a bigger wine, with more intense flavors of black cherry, plum, and dark spice. The finish was lengthy and satisfying. It had complexity and character, and though it is pricey, a Pinot lover would likely enjoy this very much.

The 2005 Best Barrel Blend ($32) is a blend of 45% Mourvedre, 45% Syrah, and 10% Grenache. Only 500 cases were produced and it has an alcohol content of 14.8%. This was another big and meaty wine with an intriguing and harmonious blend of flavors, including some earthiness, blueberry, ripe plum, vanilla, black pepper and spice. The tannins were moderate and the finish was long, spicy and interesting. This wine screamed out for a hearty ragu, braised short ribs or some rabbit. Another wine I strongly recommend.

I ended the tasting on another very high note. The 2007 Mourvedre, Hastings Ranch Vineyard ($34) is made from 100% Mourvedre, their first single-varietal Mourvedre. Only 233 cases were produced and it has an alcohol content of 14.9%. This wine is still young, and could benefit from some aging, or maybe just a lengthy decanting. But its potential seems clear. It has a ruby red color with a rather muted nose, though some earthiness came through. The taste showed more earthiness, some blueberry and ripe plums, and a touch of black pepper. I love this grape, and think this wine is going to be a killer, though you might want to cellar it for a couple of years. I certainly hope they continue to make more single-varietal Mourvedre. This wine gets my highest recommendation.

The next day, at a different event, I had the chance to meet Steve Anglim and taste his Rosé. The 2008 Rosé ($15) is a blend of 67% Grenache, 19% Mourvedre, 10% Syrah, and 4% Viognier. Only 229 cases were produced and it has an alcohol content of 14.2%. Though generally it was a dry rosé, it was bolder than most Old World rosés but not as fruity and sweet as many New World rosés. It was drier and lighter than the usual California rosés, and I enjoyed it. It had some delicious strawberry and watermelon flavors with mild spice notes. With summer coming, I have been thinking about rosés, and this would make a fine choice.

I was fortunate to have selected this winery as I actually had time to only visit two wineries during my free time. I chose well. Anglim Winery produces some excellent wines and it is well worth a visit to their tasting room. This small, family-owned winery shows the passion you will also find in other small Paso Robles wineries.

Thanks to Steffanie for arranging my tasting appointment and I wish the Anglims much luck in the future!