I have so much respect for those chefs who contribute their valuable time to local charities. I see some of the same chefs at numerous charitable functions, sometimes wondering how they have time to do everything else they do. Sure, such events provide publicity to their restaurants, but it goes much deeper than that. You just have to speak to the chefs at these events to gauge their enthusiam for the causes.

On Monday evening, I attended the 6th Annual “A Spoonful of Ginger” Food Tasting Event to benefit the Joslin Diabetes Center’s Asian American Diabetes Initiative. I went to this event last year and had a great time, and was looking forward to another fun and delicious event this year. I was not disappointed.

Prior to the event, there was an opening presentation to honor Lily Apteker, Sally and Larry Ho and the Wing Family, as well as celebratating the 10th anniversary of the founding of the Joslin Diabetes Center’s Asian American Diabetes Initiative. Though such presentations can sometimes be dry and boring, they actually injected some humor into it, making it much more pleasant. 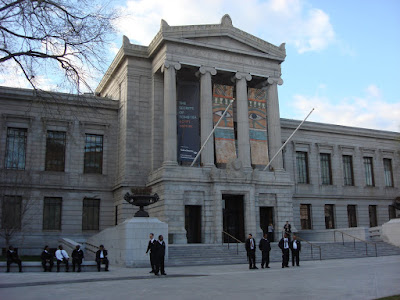 This year, the event was held at the Museum of Fine Arts, a beautiful and elegant venue for the event. Some of the display rooms were open to the attendees and they even ran brief tours of their The Secrets of Tomb 10A: Egypt 2000 BC and The Silk Road and Chinese Art exhibits. The event should be held here next year too and it makes for a good choice of a venue. 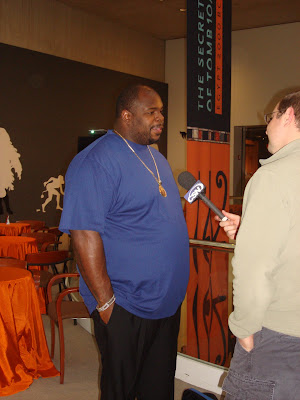 One of the special guests at this event was Vince Wilfork, a nose tackle for the New England Patriots. Vince is one of the best nose tackles in the league and an important part of the Patriots team. Go Patriots!

There were approximately twenty chefs at the event, each having prepared a dish or two, many with an Asian flair. Though they served wine and beer, I would have liked to see some Saké! Maybe next year. And if they want some assistance with Saké, they just have to contact me.

I'll now provide some of the culinary highlights of the evening, though I did enjoy most of what I ate and drank. 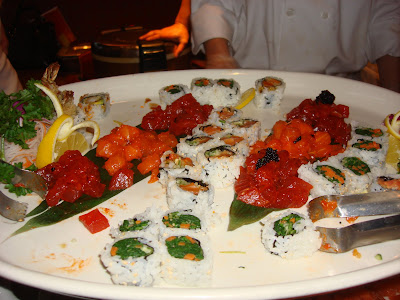 Buddachen provided various types of sushi, mostly maki with some raw, diced salmon and tuna. Everything was fairly fresh and very tasty. 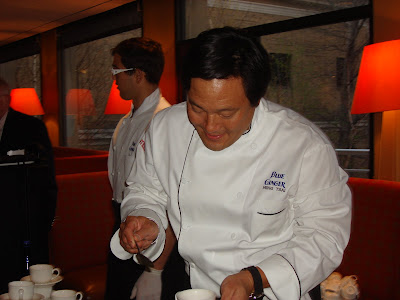 Chef Ming Tsai of Blue Ginger was present, having prepared a Hot & Sour Tomato Soup with Garlic Black Bean Shrimp & Whole Wheat Crostini. This was a very creamy and flavorful soup, with bits of shrimp, that really pleased me. 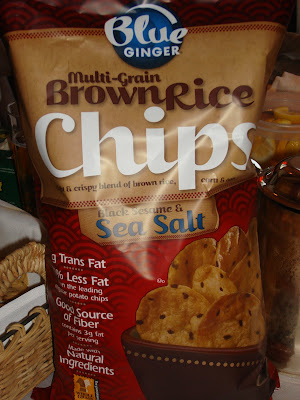 But what impressed me even more were these chips, Blue Ginger Multi-Grain Brown Rice Chips, Black Sesame and Sea Salt flavor! They were light, crisp and very tasty. Very addictive. I would not have thought something like this would be so good. They are available in stores like B.J.'s Wholesale Club and I will certainly be looking for them on my next trip there. 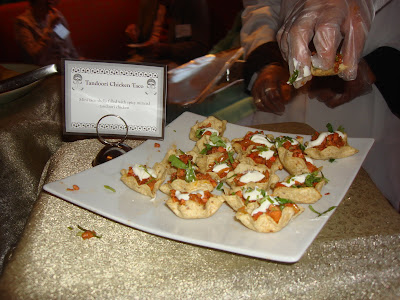 The Bombay Club served up a slightly spicy Tandoori Chicken Taco, which I enjoyed. The chicken mixture had plenty of different flavors, al working together harmoniously. 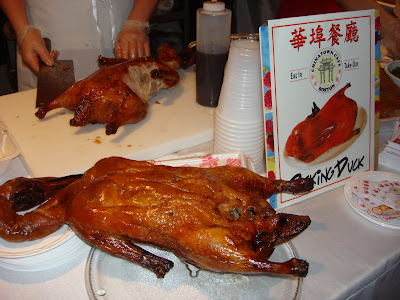 One of my favorite dishes of the night was the Peking Duck Bao prepared by the Chinatown Cafe. They also had a pork bao too, and both had delicious crispy skin as well as savory and moist meat. Such an excellent sandwich, and I could have just stood at their table, eating one after another of these sandwiches. 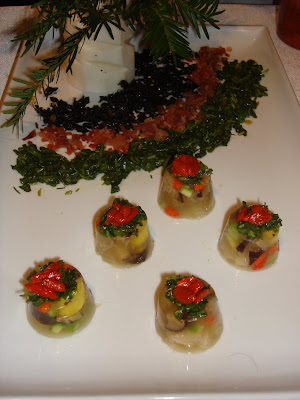 Changsho had one of the most interesting dishes, their Crystal Chicken. This is a gelled consummate stock with five components, which was intended to follow the ancient Chinese philosophy of five elements. These five additional ingredients included ginkgo, goji berries, bamboo marrow, flower mushroom, and asparagus. It had a very unique taste, and was tasty, and made me very curious as to their usual cuisine. 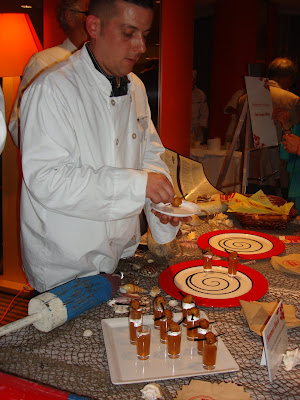 Jasper's White Summer Shack offered a Gingered Shellfish Consomme with Asian Crab Puffs, and the consomme was excellent, light and very flavorful. It might have seemed a simple matter, but that should not detract from the clean and interesting taste. The crab puff was very good too. 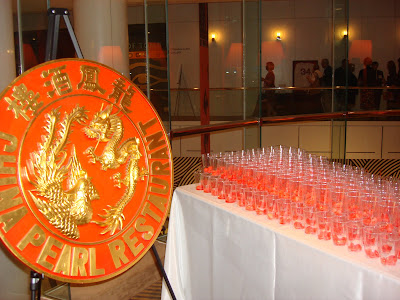 China Pearl had quite a refreshing dessert, a Watermelon Tapioca, which consisted of watermelon pieces at the bottom of a glass and then topped with a watermelon-flavored tapioca. It had a nice clean taste, and I have always loved the taste of watermelon. A perfect summer dessert. 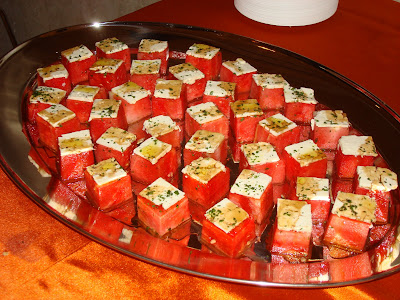 There was more watermelon at the Vlora table, cubes of watermelon topped with feta, though they were not easy to slice with a fork. As I tried to do so, my first piece of watermelon shot off my plate! When I did get to eat a piece though, I enjoyed it, and the feta actually added an intriguing, and slightly briny, taste to the sweet melon. 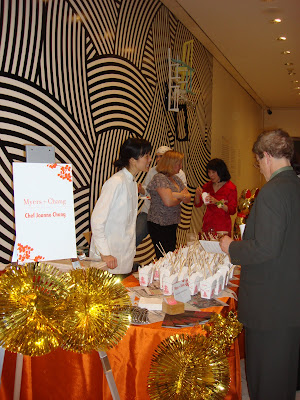 Chef Joanne Chang was present, representing both Flour Bakery and Myers+Chang, two of my favorite places. Chef Chang is one of those chefs I see at many different charity events. On behalf of Myers+ Chang, she served their Thai Ginger Chicken Salad, thin noodles with spicy chicken. It is another excellent warm weather dish. On behalf of Flour Bakery, and which is also served at Myers+Chang, Joanne served the Chocolate Mousse and 5 Spice Marshmallow, a decadent dessert sure to please all chocolate lovers. 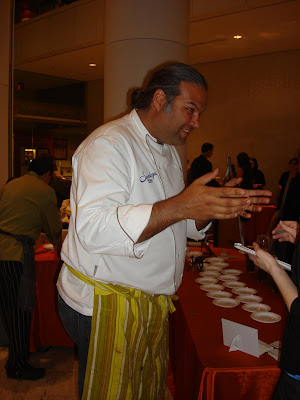 I spent some time chatting with Chef Jose Duarte of Taranta, who served Peruvian Crab Meat Causa. I have never eaten at Taranta, which serves a blended cuisine of Southern Italy and Peru. But, after chatting with Chef Duarte, I will try to make a visit there in the near future. Chef Duarte is certainly a very passionate chef, with strong concerns about sustainability. He is realistic as well, understanding that sustainability can be very expensive, and that not all consumers would be willing to pay a much higher price for all items. Thus, Chef Duarte is doing the best he can, the most we can ask from anyone.

We even talked about cuy, a Peruvian term for guinea pigs, which have been eaten for food in Peru for many centuries. Chef Duarte also mentioned that the Causa he had made contained an intriguing Peruvian potato, which had a consistency almost like play-doh (but obviously edible and much tastier). This makes it much easier to shape the potato for various dishes. Chef Duarte was very personable and down to earth, and it was a pleasure to chat with him.

Overall, this was an excellent event for a good cause. As you savor the photos and descriptions of some of the dishes I enjoyed, please also give consideration to the Joslin Diabetes Center’s Asian American Diabetes Initiative. Please support this worthy cause, in any way that you can. And give thanks to those chefs who take the time to support such charitable causes.
Posted by Richard Auffrey at 1:09 PM

This looks like a fantastic event!Great people who make great food, what could be better than that?! :)

Eat right & lose weight to Control Diabetes. Use meal planner to find right foods which may help you manage blood sugar under control. Use this free meal planner http://bit.ly/cMc1i8