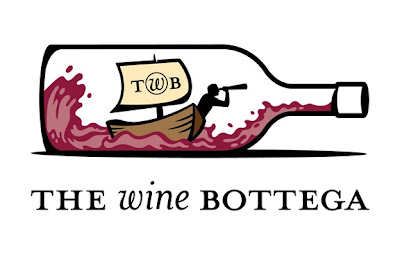 Natural wines are certainly a hot topic, as well as controversial. For a recent example, check out Dave McIntyre's article "Wine: Natural isn't perfect" as well as Alice Feiring's two-part response (Part 1 & Part 2). There is even a significant debate over the definition of "natural" wine.

Last week, The Wine Bottega in the North End held a Natural Wine Abbondanza. They poured sixteen wines, from several different countries, and these wines fit their definition of "natural" wine. "The Wine Bottega makes all of its buying decisions with the underlying philosophy that wine should be a contextual vehicle that tells the story of its place of origin. We believe that this story is best told when a wine is gently crafted, to allow the particular natural phenomena that form the wine's unique personality to shine through. We are proud to say that the vast majority of the wines we sell and drink ourselves are natural wines." 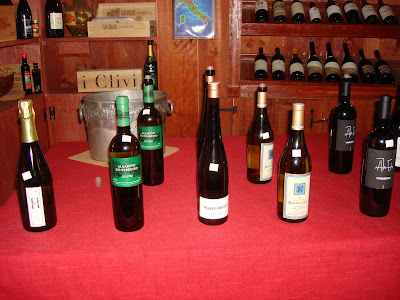 Above is the list of wines they presented, many organic or biodynamic. In addition, many of the wine makers are known as minimalists, believing wine is made in the vineyards and that they should do as little as possible in the winery. Are such natural wines better than other wines? I can't really say. What I can say is that in general, I enjoyed nearly all of these wines. The only ones I didn't was due to personal preference, and not because I found them flawed.

The wines were all very Old World in style, generally lower in alcohol and more restrained, rather than being very fruit forward. I am going to highlight the wines that especially impressed me. I would also suggest that you visit The Wine Bottega and ask about these wines, and let them tell you the stories of these interesting wine makers.

2002 Domaine Huet Vouvray Petillant, Loire, France
Domaine Huet is a biodynamic producer with a top-notch reputation in Vouvray. This sparkling wine, made in the method of Champagne, is 100% Chenin Blanc from young vines. It has a very aromatic nose, delicious tastes of apple and pear, good acidity and a lengthy finish. You won't find many sparkling Chenins around, but if more wines can be made as well as this one, then more wineries should start producing some.

2005 Vodopivec Vitovska, Venezia-Giulia, Italy
I have previously reviewed this wine and love it, even including it on my list 2009: Top Ten Wines Over $50. This is a top recommendation.

2007 Thierry Puzelat Touraine "In Cot We Trust" Loire, France
This wine surprised me, and I never would have guessed the grape in a blind taste test. The wine is produced from Malbec and only has an alcohol content of 12.5%. It doesn't taste like any Malbec I have had from Argentina. It has a moderate red color and the nose had some mild red fruit aromas combined with some earthy aspects. The taste reflected the nose, with plenty of black cherry and raspberry flavors with a backbone of earthiness, and it had a long and interesting finish. The earthiness reminded me a bit of Burgundy, and I think it added well to the wine.

NV (2008) A. Agr. Frank Cornelissen "Contadino 6" Mt. Etna, Sicily
This wine had the most unique taste at the event. It is a "vino de tavola rosso," a blend of Nerello Mascalese and other grapes. The wine maker is a Dutch minimalist and this wine is made in glass lined amphora, is not fined or filtered and has an alcohol content of 14.5%. It is made to be drunk young, and should not be decanted. It has a funky nose, some earthiness, spice and dark berry smells. The flavor was also quite funky, though very enjoyable, with some unique flavors that I could not fully identify. Its complex flavors really intrigued me, and it might have been my favorite of the evening.

2005 Rosa Bosco "Il Rosa Bosco" Venezia Giulia, Italy
This was another surprising wine where I never would have guessed the grape. It was actually Merlot but reminded far more of a Burgundy. The producer is biodynamic, the grapes are old vines and the wine has an alcohol content of 13.5%. It has a light red color with a more floral and red fruit nose. The taste has bright red fruit, some mild spice and a touch of earth. A very, pleasant surprise.

2004 Coturri & Sons Cotes de Cailloux, Sonoma, CA
I have long been a fan of Coturri's wines, and have previously reviewed a number of them. This is the first time though I have tasted this wine, and Coturri did not disappoint. It is a Rhone style wine, a blend of 50% Grenache, 30% Syrah, and 20% Mourvedre. Though it has an alcohol content of 15.5%, it is balanced so you don't notice the alcohol. This is definitely an Old World style wine, and you might actually think it was a fine French Rhone.
Posted by Richard Auffrey at 6:00 AM

What a wonderful post, beautifully written. It captures these wines so well. Keep on posting.