For All The Tea In China 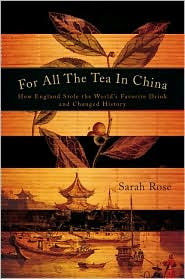 The Chinese once supplied Britain with green tea that contained poison! The poisons were intended to make the tea have a very green color, as the Chinese believed the British wanted it to look so green. When the British eventually learned the truth, most of them started drinking black tea instead.

This fact and much more about tea can be found in a fascinating new book, For All the Tea in China: How England Stole the World's Favorite Drink and Changed History by Sarah Rose (Penguin Group, March 2010, $25.95). This hardcover book, with 262 pages, is a historical work that reads partially like an Indiana Jones tale.

As of 1848, the British East India Company had spent about two hundred years trading opium to China for tea. Tea became an important element of the British economy, and the Opium Wars were even fought against China to protect the opium/tea trade. But Britain worried what might happen if China legalized the opium poppy, and they felt they needed another source for their tea. There was some tea grown in India, but it was of poorer quality. What could they do?

Enter Robert Fortune, a Scottish botanist, who engage on a mission worthy of Indiana Jones. It was decided that Britain needed to acquire numerous samples of the best Chinese tea plants, as well as their knowledge of tea manufacturing. Fortune was hired to make the dangerous trek into the forbidden heart of China to obtain these items.

The book is a fascinating look at Fortune's adventures, as well as an intimate look into the history of tea. Fortune was certainly a daring man, as well as lucky, and I thoroughly enjoyed his tale. Rose is a compelling writer and has chosen a very interesting subject. Fortune's success transformed the world and you should learn what he accomplished. It is a fun journey and well worth reading.

Here are some of the interesting things you'll learn about tea, China and England:

"Even with a measure of quality control, tea was not a clean product in any sense, which is one of the reasons that Chinese tea drinkers traditionally discard the first cup from any pot. 'The first cup is for your enemies,; the saying goes among connoisseurs." (p.87)

"Black tea is fermented; green tea is not....Although it is called fermenting, the process of making black tea is technically misnamed. Nothing ferments in a chemical sense;...Black tea is, rather, cured or ripened. But the language of wine colors the language of all beverages, and so the label of 'fermentation' has stuck to black tea. (Indeed, if tea does ferment and fungus grows, a carcinogenic substance is produced.") (p.89)

"In the hierarchy of Chinese life, tea was ranked as one of the seven necessities, along with firewood, rice, oil, salt, soy sauce, and vinegar." (p.97)

"The growing demand for black tea in England was due in no small part to a glut of sugar from the West Indies and the Caribbean. Black tea takes sugar; green tea does not. When Fortune discovered that green tea was poisoned with dye, British tastes turned even more toward black tea." (p.137)

"According to Chinese custom, then as now, it is considered a great honor when a host overfeed a guest." (p.158)

"Per pound, black tea has more caffeine than coffee--but where one pound of tea brews some two hundred cups, a pound of coffee yields barely forty. By the cup, black tea actually contains roughly half as much caffeine as coffee." (p.164)
Posted by Richard Auffrey at 4:00 AM

Added this one to the growing list. I love it when friends go abroad and bring me back local made teas. Have a nice Black Russian leaf, a great Western China tea, just finished a small assortment of Japanese teas. Can't wait to go to Africa this summer to see what I can find there.

Please tell me what you think about the book when you read it.