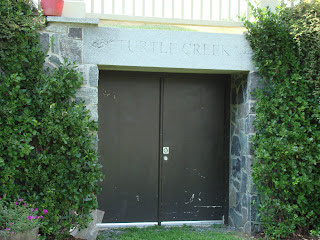 Have you ever had wines from the Turtle Creek Winery? There is a good chance you have not but you should seek out their wines.

On Saturday, a fine summer day, I organized a private tour and tasting of this winery for some members of the North Shore Winers. Turtle Creek Winery is not generally open to the public but they do sometimes run private tours. We were lucky enough to partake of one of these private tours.

Turtle Creek Winery is located in Lincoln, Massachusetts. Kip Kumler, the owner and winemaker, led our tour. Turtle Creek is a modest operation, producing only 500-1000 cases of wine per year. Thus, each of their separate wines consists of less than 100 cases. So, these are very limited production wines. There are several wine stores that carry their wines plus some can be ordered from the winery itself. But, as these wines are so limited in production, it can be difficult to find the wines. Which is why many people may be unfamiliar with their wines. 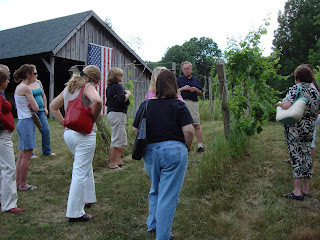 We began our tour outside near some grape vines where Kip gave a short talk on growing grapes in Massachusetts. He discussed some of the problems that grape growers in the region encounter including harsh winters, fungis/pests and a short growing season. Grapes can be grown but one has to deal with the potential problems. Kip detailed some of his methods for overcoming the limitations of the region. He does rely on technology to help overcome these matters, and does much research and testing to develop new and improved methods.

Presently, Turtle Creek plants Chardonnay, Cabernet Franc, Pinot Noir, and Riesling. They also purchase grapes from California and New York. Kip discussed some of his growing practices, indicating that he aims for better grapes at the expense of yield. He clearly is not trying to mass produce grapes but rather is aiming for a superior product. This is a common denominator at Turtle Creek, the pursuit of excellence rather than the mass production of a mediocre product.

It was very clear from the outset that Kip is very passionate about his wines. He truly seeks to make an excellent product. That is clearly one reason why his wine production has remained so low for these years. He certainly seems to work very hard at ensuring the only wine he sells is some of his best. He mentioned that he has destroyed wine that did not meet his standards. He would not simply use the inferior wine for blending. It would end up a buried mistake.

Our tour then went inside where we got to see the fermentation area, the wine cellar, laboratory and more. 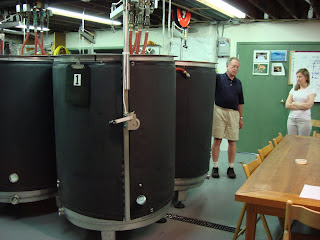 This is a photo of Kip next to the fermentation tanks. The tanks are specially made to maintain certain temperature levels. 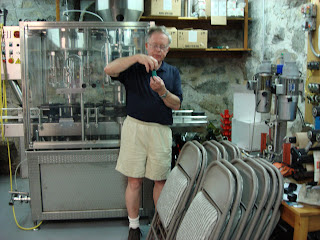 This is a photo of Kip in front of his bottling machine. This is where the wines are also corked and labeled. Again, Kip uses technology to assist his work and make it easier to bottle and label. For example, the bottler does the corking in a vacuum so that the air pressure inside a corked bottle is proper without the need to sit out and wait. 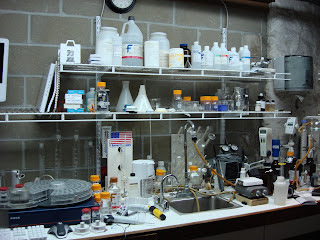 This is part of the laboratory where Kip does testing and research. Again, he uses technology to assist him in his endeavors. It is clear he has invested much in his efforts to make a superior product. 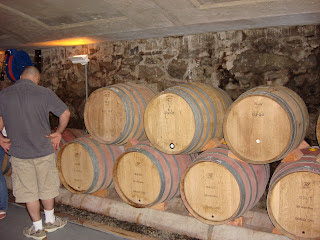 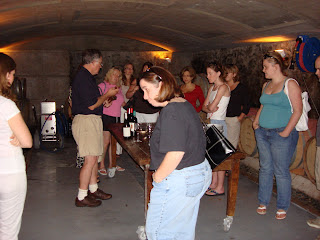 Our final stop was the tasting room, where barrels of wine are stored against the walls. We got to taste five different wines and most of them were quite impressive. Four of the wines, except for the Cabernet Franc, were made from grapes shipped to the winery. The Cabernet Franc was grown on the premises.

Their 2005 Chardonnay was delicious. It sees only a minor amount of oak so is not overly buttery. The fruit flavors are more dominate, such as apple and apricot. It was crisp and refreshing. Though I am not a big fan of white wines, this was definitely a white wine I enjoyed. And I did buy a couple bottles as well.

The 2005 Pinot Noir was also good. It is a light colored wine with lots of bright cherry flavors. I have had others of their Pinot Noirs and have always enjoyed them.

The 2004 Cabernet Sauvignon was a darker colored wine, more full bodied with lots of fruit and spice flavors. It would have gone perfectly with a steak. This is a wine you could easily cellar for a few years. I should note that his 2005 won a gold medal at a recent competition in California.

The 2005 Zinfandel was a big, bold, spicy wine. It was vibrant with flavor and complexity. This was a favorite of a number of the North Shore Winers.

The only wine I did not care for was the 2000 Cabernet Franc, which was the first bottling of their own grown grapes. It had too much of a vegetal taste to me. Kip though acknowledged that this wine had not really been as good as he hoped it would be. He is looking forward to making better Cabernet Franc in the future.

What makes these wines even better is their cost. I don't think any of the Turtle Creek wines cost more than $20. Most are priced from $16-18. For such low production wines, these costs are unbelieveable. And when you consider the high quality of these wines, then these wines give you a great value. These wines are well crafted and you certainly can't go wrong with them. The Winers certainly enjoyed the wines and a number of them bought the Chardonnay, the only wine available. I know if the other varietals had been available, cases of the wine would have walked out that door.

Kip certainly is a good spokesman for his wines. He was very knowledgeable, personable and accomodating. He evidences a true passion for his work and it shows in his products.

If you want to try some excellent wines, especially good values ones, then seek out Turtle Creek wines!
Posted by Richard Auffrey at 5:59 PM