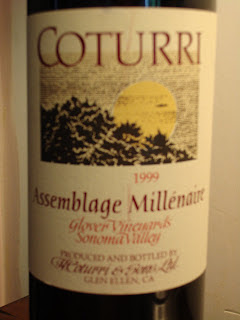 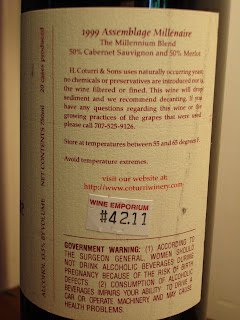 While wandering through The Wine Emporium in the South End of Boston, I found several bottles of the 1999 Coturri Assemblage Millenaire ($25). I have never seen this wine before, or even heard of it before. I am a fan of Coturri Winery which makes some excellent organic wines. Their wines are usually low production wines and very reasonably priced. You can find some of my views of other Coturri wines on this blog. As the Assemblage Millenaire was new to me and seemed intriguing, I bought several bottles.

Now, the Coturri website says almost nothing about the Assemblage Millenaire. And I could not find much else online either.

This Assemblage Millenaire is a blend of 50% Cabernet Sauvignon and 50% Merlot. Only twenty cases were made so this was a very low production wine. I opened a bottle a few nights ago with my local wine buddies.

The wine is very dark in color, almost inky. Initially, this wine had a funky aroma, very earthy and almost a barnyard smell. My initial tastes of this wine began with a gush of very grapey flavors. It transformed into a more earthy taste on the finish, which was fairly long. What this wine really needed was to sit and breath for awhile. For later on, after some time had passed, the wine really smoothed out. The funky aroma largely vanished, though still being mildly earthy. The grapey flavor became much more subdued to nice blackberry and dark cherry flavors. The wine became very smooth with a complex layer of tastes. There were some spicy elements on the finish that emerged and the earthiness largely vanished. I was very impressed with the wine after it had sat for a time. It became very much a Bordeaux-style wine.

My friends all enjoyed the wine as well, especially after it sat for a time. I would recommend this as a Drink & Buy. I do look forward to my other bottles as I will get to taste even more of the wine then, rather than split it with five others.

For a wine of such low production, which is also all organic, I think this is an excellent value wine. You may not be able to find this wine because of its rarity, but if you do, buy it! If you have never had any Coturri wines, I recommend you try some. You may find some new favorites.
Posted by Richard Auffrey at 1:53 PM

I am just now starting to appreciate wines. I found this site to be very informative. I have it bookmarked. Thanks, Rick.

Welcome to my blog Rick and thanks for the compliment. I do hope you continue to enjoy this site and feel free to send me any suggestions as well. Take care.