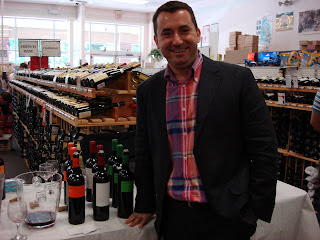 On June 30, Acton Wine & Spirit Co. hosted a special wine tasting with six Spanish winemakers. This was an exceptional event. I am going to address each of the Spanish winemakers and their wines in their own post.

The third winemaker I met was Juanjo Galcera Pinol of Bodegas Vinos Pinol. Also check out their websites at Vinos Pinol and Casa Pinol. This winery was founded in 1954 and is located in Terra Alta, a few miles southwest of Priorat. Terra Alta has a warmer microclimate so their wines are generally more full bodied and richer. They also have some old vines, of several different varietals, and engage in many organic practices. Juanjo was as personable and helpful as the other winemakers. I continued to enjoy talking to these men.

Juanjo brought three different wines with him, each with its own merits.

2005 Vinos Pinol Ludovicus ($9.99)--This wine is made of 35% Garnacha, 30% Tempranillo, 25% Syrah, and 10% Cabernet Sauvignon. It is aged for three months in French and American oak. They also only make 4000 cases of this wine. This is a lush and fruit wine, very pleasing to the palate. There are many different berry flavors meshing quite well together. It is an every day wine, and one you could easily drink alone. An excellent value wine.

2004 Vinos Pinol Portal Tinto ($14.99)--This is a more complex wine than the Ludovicus. The Portal consists of 30% Merlot, 30% Cabernet Sauvignon, 20% Garnacha, 10% Syrah, and 10% Tempranillo. It also sees 6 months in French, American and Hungarian oak. Only 3050 cases were made. This wine has black cherry and blackberry flavors but they are more subdued. There is also a strong current of spice as well as some earthy undertones. It is a well balanced wine that is sure to please. At this price, it is a bargain!

2005 Vinos Pinol Sacra Natura ($17.99)--This wine is a step up from the Portal. It is comprised of 60% Carinena and 40% Tempranillo. It sees 6 months in French, American and Hungarian oak. Only 3000 cases are made. This was a WOW wine. Very complex and harmonious in its flavors. Nice fruit and spice, with tinges of chocolate and coffee. A long lingering finish. A definite recommendation.

They make several other wines and I will definitely hunt them down to try as well.