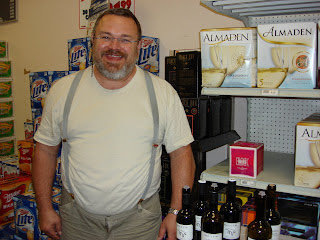 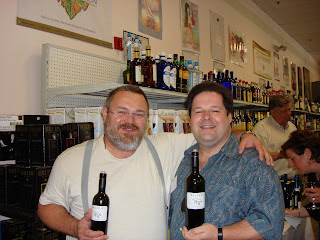 On June 30, Acton Wine & Spirit Co. hosted a special wine tasting with six Spanish winemakers. This was an exceptional event. I am going to address each of the Spanish winemakers and their wines in their own post.

I began my tasting at a table with wines from Castellar, Vinos Sin Ley and Bellum wines. I also met Emili Esteve Punti, winemaker and entrepeneur, who must be a very busy man as he is involved in various wineries throughout Spain.

He is the winemaker at Celler Vilafranca in Penedes which makes Cavas. He is also a winemaker at the joint venture of Bellum in the Yecla region which makes Monastrell based wines. In addition, he is the co-creator of Vinos Sin Ley ("Wines without laws") which is an innovative company that creates value driven and unconventional wines all across Spain. Vinos Sin Ley makes many interesting wines. Emili is involved in winemaking of some of these wines too.

Emili spoke very little English but luckily there was a member, Liria, of the North Shore Winers who spoke Spanish and translated for us. If she had not been present though, there were others present who could translate. Emili was very personable and charismatic. It was quite a pleasure to meet and speak with him. He also makes some superior wines. I got to taste eight of his wines.

NV Castellar Cava ($9.99)-Cava is Spanish sparkling wine, made like French Champagne but usually made with indigenous Spanish varietals such as Xarel-lo, Macabeo, and Paralleda. This Castellar is made of 60% Xarel-lo, 20% Macabe0, and 20% Parellada. This Cava, like most, is fruitier than Champagne and lacks that typical yeasty flavor. I much prefer Cava to Champagne as I don't care for that yeasty flavor. Plus, Cava is generally much less expensive than Champagne. I have had this Castellar before and love it. It has a nice fruity flavor with a crisp tang. It is also a great value.

NV Castellar Cava Rose ($9.99)--This Cava Rose is made of 70% Trepat and 30% Garnacha. Trepat is an indigenous Spanish grape and one I had not heard of before this tasting. It seems Trepat is mainly used to make Cava Roses. This was an interesting fruity Rose having more of an Old World flair. Thus, the flavors are more subtle and there is a tinge of sweetness. A very interesting option for a sparkling wine. Once again, another good value.

2005 Vinos Sin Ley Zestos ($7.00)--This wine comes from the Madrid D.O. and is made from 50% Tempranillo and 50% Garnacha. It is aged in stainless steel tanks so there is no oak flavors. This is a fruity red wine, somewhat reminiscent of Pinot Noir, and has a fruity aroma. It is a simple wine but with character. And a definite bargain at this price.

2005 Vinos Sin Ley Zestos Especial ($8.99)--This wine also comes from the Madrid D.O. but is made from 85% Tempranillo and 15% Syrah. It too sees no oak. This was an exceptional wine for its price. It has nice fruit flavors with spicy undertones. It shows more complexity than the basic Zestos and many of my friends favored this wine.

2004 Vinos Sin Ley G-2 Monstant ($7.99)--This is one of the six Garnacha based wines made by Vinos Sin Ley. The G-2 is made in the Montsant D.O. of 100% Garnacha. I enjoyed this wine very much. It has some nice dark berry flavors with a bit of spice and earth. It is a smooth and easy drinking wine. Another good value wine which is going to be common to all of these wines.

2005 Bellum Providencia ($17.99)--We now come to one of my favorite varietals, Monastrell. This wine comes from the Yecla D.O. and is 100% Monastrell from 85-90 year old vines. The wine spends eight months in French Oak. This is a limited production wine as only 800 cases are made. I loved this wine! It was strong, full-bodied with a complex melange of dark fruit, spice and earthiness. A great expression of Monastrell.

2005 Bellum el Principio ($19.99)--This wine is very similar to the Providencia. It too is 100% old vine Monastrell, with eight months in oak and only 800 cases were made. It seemed though a bit earthier than the Providencia.

2004 Bellum El Remate ($32.99)--This late harvest wine is a dessert wine. It too is 100% old vine Monastrell, with eight months in oak but only 300 cases were made. This was a phenomenal wine, a full bodied, dark and sweet wine. It was not cloyingly sweet. I bought some chocolate to taste with this wine and it paired up perfectly. This would be a great accompaniment to any chocolate dessert. This is a more expensive wine but it is well worth the price.

Overall, I was impressed with all of these wines. Most of them were inexpensive and good values. Though some were simple wines they had character and this thus elevated them above similarly priced wines.