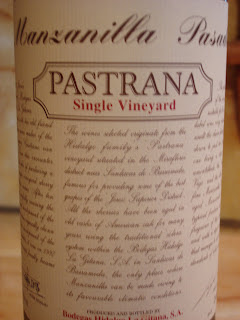 I will admit that I don't know much about Sherry. I am still learning. I know the basics but have not had much opportunity to taste good Sherries from Spain. Though I have enjoyed the ones I have tasted.

Catavino's July Virtual Tasting is on Sherries. And I just fit this bottle in under the wire. I should also mention that Catavino has several articles on Sherry this month that you can check out. Check out "Sherry Questions-Answers-Ideas", "Timeline of Spanish Sherry", "Sherry-Spain's Cure for Summer Heat" and "Website Review: Enjoy Sherry."

The Bodegas Hidalgo La Gitana Pastrana Manzanilla Pasada, Single Vineyard ($22) is produced from only free run juice. It has an alcohol content of 15.5%. This Sherry is extra aged until the flor begins to die off. Thus it is supposed to result in a deeper, richer flavour.

I found this Sherry to be light and crisp with a nutty and salty flavor. It has a nice golden color and kind of a nutty nose. It has a long finish. It has more complexity than the other Sherry I recently tasted.

I paired this Sherry with a dinner of seared scallops (cooked in olive oil and sea salt), atop a bed of shoepeg corn and bacon. The Sherry was a nice match, especially with the salt of the bacon and the scallops. The nutty flavor became more subdued and the Sherry mellowed. I had some more of the Sherry after dinner, without any food, and I enjoyed it then as well.

I recommend this Sherry as a Drink & Buy. And I will continue to try other Sherries.
Posted by Richard Auffrey at 4:26 PM

Where did you find this wine in the US? Thanks!

Hi Txacoli,
I found this wine at Tinto Fino, an all Spanish wine store, in New York City. www.tintofino.com

For what it is worth, we were served the wine last week at both El Poblet and Sant Pau in Spain as wine pairings. These are two and three star Michelin joints, respectively, and the best on the East Coast of Spain......with the best wine stewards. Apparently they also use it at El Bulli as a wine pairing.

Thanks for the info. What were your thoughts on this sherry?

I have to confess to being a stupid Californian when it comes to Spanish wines. I always turn myself over to the wine steward and sit back: Penedes, Duro, Rioja, Muga, Jerez.....

As a California chef in wine country I have a deep and abiding hatred of chardonnay, and really hate overoaked liquid toothpick chardonnay.

This wine was different enough from the normal sherries I run across that we did not actually realize it was. I searched for it under the grape, Palomino. It was crisp, clean and had a rich, startling finish that almost literally rang a bell when paired with Quique Dacosta's oyster and Carme Ruscellada's salmonete. Great stuff, and perfect with seafood. It made me sit up and pay attention, like a ringing bell.

We liked it enough that I bought the last five bottles in America (Chambers Street Wines in NYC) and had them airshipped overnight for a lunch we are doing tomorrow for the AT&T. I hope it rings my clients' bell as well.

Thanks for your help!