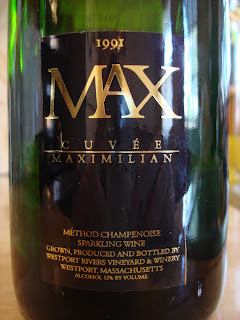 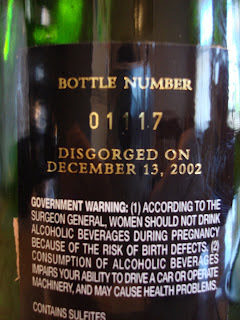 It was my birthday yesterday so I opened a couple of special bottles of wine, including the oldest bottle of wine I own.
The 1991 Cuvee Maximilian was made by the Westport Rivers Winery in Massachusetts. Westport Rivers is a family owned vineyard and winery. They planted their first vines in 1986. They make both sparkling and still wines. Their Brut Cuvée RJR is an inexpensive ($20) sparkling wine which is very good.
The 1991 Cuvee Maximilian ($90) is the top of their line. It is comprised of 72% Pinot Noir and 28% Chardonnay. It spent twelve years "en tirage". It is made in the methode champenoise, the same way French champagnes are made. Only 40 cases of this wine were supposed to be produced. But, my bottle was numbered 1117 so I am unsure. The bottle came in a wooden box. The 1991 may not be available any longer at the winery as their website only has a listing for their 1992.
This sparkling wine was certainly very different than their basic Brut Cuvée RJR. The Brut has a touch of sweetness but the Maximilian is far more like traditional French champagne. It has more of that typical yeasty flavor. It is certainly a big wine, with layers of flavors, and lots of tiny bubbles. Everyone enjoyed the Maximilian very much. I think this would compare quite well against French champagne and most people would not believe it came from Massachusetts.
So, why not try a local winery? The 1992 Cuvee Maximilian is only selling for $60. It is also very limited so you might want to buy a bottle for a special occasion.
Posted by Richard Auffrey at 10:08 AM

Sounds like a nice one! I love finding these "little known" gems. Also I'm a bit of a pushover for well made sparklers!